Chris Good, a Republican who was seeking to represent the Powell area in the Wyoming House of Representatives, announced “with a heavy heart” Wednesday that he is withdrawing from the … 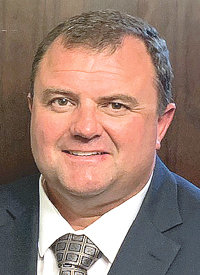 Chris Good, a Republican who was seeking to represent the Powell area in the Wyoming House of Representatives, announced “with a heavy heart” Wednesday that he is withdrawing from the House District 25 race.

“One of my strongest values is my family, and now they need me,“ Good said in a statement.

His wife, Miria, sustained a serious head injury in an early June accident at work and “will require an extended recovery,” he said, adding, “I don’t think it would be fair to my wife or the Legislature to try to divide my time.”

Good notified the Wyoming Secretary of State’s Office of his decision to withdraw on Wednesday morning.

“It is my plan to re-enter the race for state representative in the future, depending on my wife’s health,” he said.

The 48-year-old owner of Quality Propane and multiple fireworks outlets had been set to face off with state Rep. Dan Laursen, R-Powell, in next month’s primary election.

“I believe the people of HD 25 need strong, thoughtful representation in Cheyenne,” Good said in Wednesday’s statement. “Financial crisis is impending for our state, and we need people who can research issues and systems, then make careful decisions to get through this crisis. Budgets must be cut using a scalpel, not a chainsaw. I believe I am the person to represent the people of Park County.”

Ballots for the Aug. 18 primary have already been printed, so Park County elections officials are posting signs at each polling place to inform voters that Good has withdrawn from the race. However, the announcement will come too late for some voters, as early voting started last week and some absentee ballots have already been cast.

All of the votes for Good will be counted, but will not be considered for the race since he has formally withdrawn, the Secretary of State’s Office explained.

Laursen, 60, has represented HD 25 since 2015. Barring a challenge from an independent or write-in candidate, Laursen will now be unopposed in his bid for a fourth two-year term. The district consists of the City of Powell and the immediate surrounding area.

Meanwhile, local residents have been donating funds to help assist the Good family with expenses related to Miria’s injury. To contribute, visit www.bit.ly/3iGl4sV.

In his statement, Good said he is “so grateful for the prayers and concern that our family has received in the last five weeks.”