While the Powell High School girls’ soccer team has yet to find the win column this season, the squad’s growth has been on display.

The Panthers dropped contests against Lander … 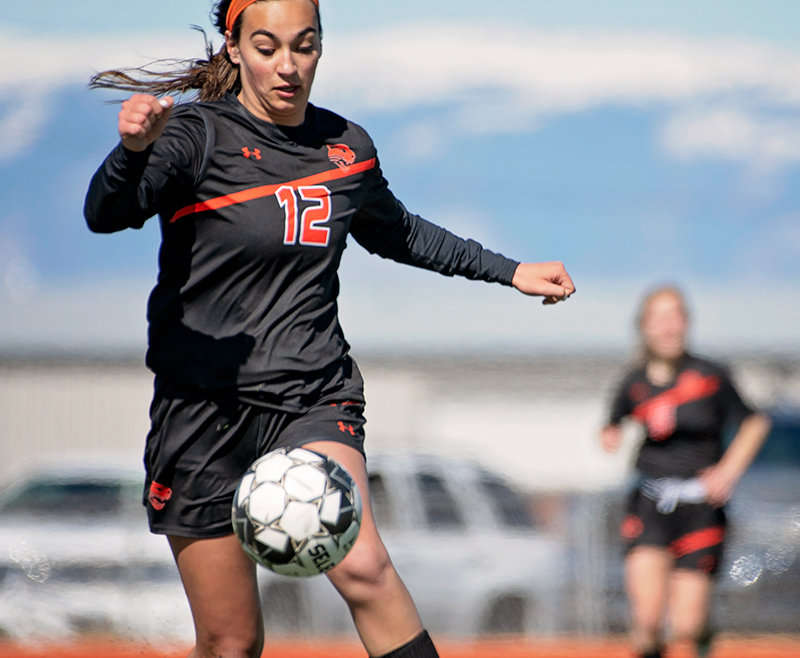 PHS freshman Kenzie Fields attempts to control a ball Friday in Powell’s 9-0 loss to Lander Valley. Despite the wide margin, head coach Kaitlin Loeffen was pleased with her team’s performance and noticed improvement from the girls.
Tribune photo by Carla Wensky
Posted Tuesday, April 13, 2021 8:00 am
By Carson Field

While the Powell High School girls’ soccer team has yet to find the win column this season, the squad’s growth has been on display.

The Panthers dropped contests against Lander Valley and Pinedale over the weekend, falling 9-0 to the Tigers Friday and 2-0 to the Wranglers the next day. PHS is now 0-6 overall.

“I felt my girls stepped up, played the ball well, and really started clicking on the field,” Loeffen said. “That required a big shift and multiple players stepping up.”

The next day, PHS put together its best match of the year after a long bus trip south to Pinedale.

The Panthers lost by just two goals on Saturday and saw better production on both sides of the field. They were unable to score but saw a handful of shots on goal.

“The ladies came out to play,” Loeffen said. “While we didn’t find the back of the net, they are certainly finding a more offensive mindset.”

Powell will get another shot at Pinedale on April 24, and with one match against the Wranglers now in the books, Loeffen thinks her team will have a chance the second time around.

“We look forward to playing Pinedale again as I feel we are evenly matched,” Loeffen said.

Individually, she said Kabrie Cannon did exceptionally despite moving from the midfield to the defensive line.

“As a coach you hate taking a player out of their comfort zone, but she was more than willing to do what she needed for the betterment of the team,” Loeffen said. “I was thoroughly impressed with her transition and the way she was able to vocalize in the back line and play the ball up the side while containing attacking players.”

PHS plays home matches against Mountain View and Lyman this week, at 3 p.m. Friday and noon on Saturday, respectively. Before then, Loeffen and assistant coach Stan Hedges will work to improve the girls’ conditioning, as well as certain areas of both sides of the ball.

“This week’s practices will be much of the same while we will start the week off with film and conditioning, as we need to begin peaking physically,” Loeffen said. “An area of weakness for defense is corner kicks so we will practice those, and on offense, we will continue to work on first touch and first to the ball.”