A bill that will give a Powell game bird farm more time to breed greater sage grouse in captivity has been sent to Gov. Mark Gordon for approval. By extending the sunset period on the law that … 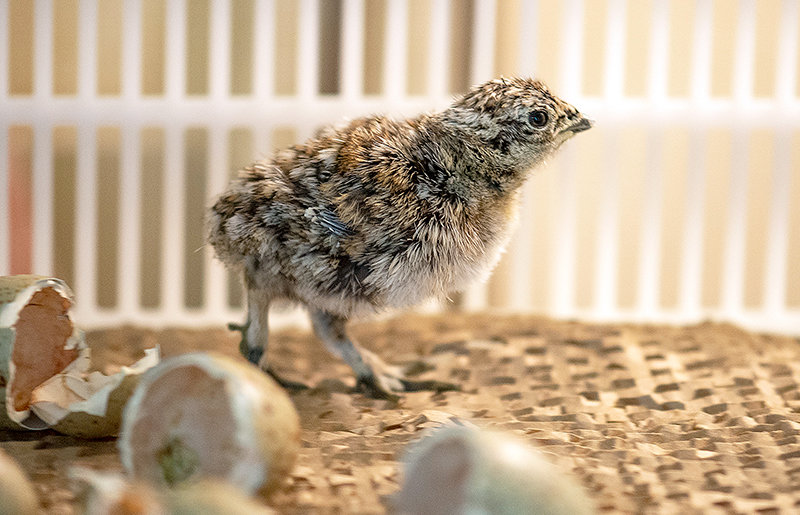 One of the first greater sage grouse chicks hatched at Diamond Wings Upland Game Birds farm is up and running soon after breaking out of its shell last year. The Wyoming Legislature passed a bill last week that gives the Powell bird farm five more years to attempt to raise and breed the birds in captivity.
Tribune photo by Mark Davis 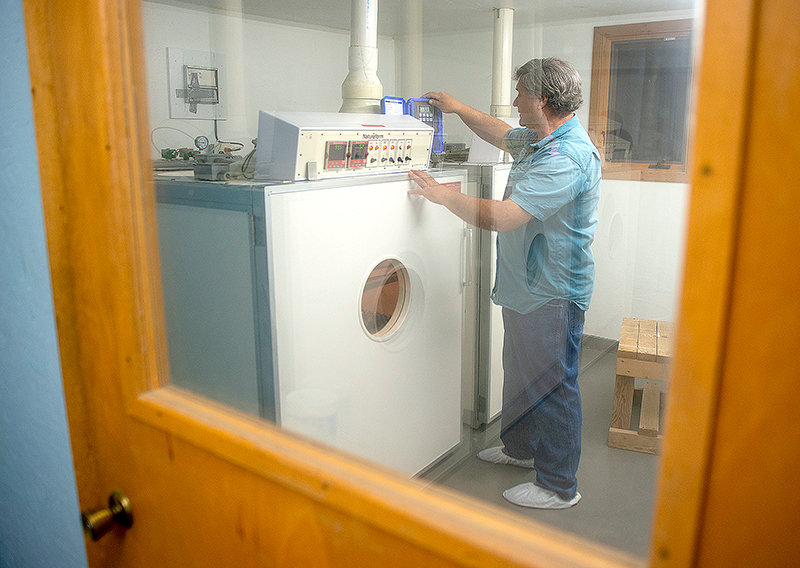 A bill that will give a Powell game bird farm more time to breed greater sage grouse in captivity has been sent to Gov. Mark Gordon for approval. By extending the sunset period on the law that authorizes the attempts, Diamond Wings Upland Game Birds, LLC, and manager Karl Bear will get five more years to continue the controversial project. Without the extension, the project would have been forced to stop at the end of the year.

Senate File 61 easily passed through the Senate with a 26-4 vote before being sent to the House Travel, Recreation and Wildlife Committee. Despite a large contingent of opposition by conservation organizations, wildlife advocacy groups and private citizens — so many that the debate had to be carried over for an additional hearing — the act was sent to the House floor by unanimous do pass recommendation, 9-0. The House eventually passed the bill 44-15-1, though instead of authorizing the captive breeding in perpetuity, the lower body only extended the sunset period by five years.

Those in opposition to extending the experiment cited disease, privatization of a game species, the lack of transparency by the private enterprise and the possibility that four more farms could apply for certification to collect wild eggs as reasons to end the experiment, which is being done outside a scientifically controlled environment such as universities or by the U.S Fish and Wildlife Service.

Western States Sage Grouse Recovery Foundation President Diemer True said the farm has approached the University of Wyoming and Northwest College about participating in the project, but offers have been so far declined. True is the former owner of the farm, a successful oil entrepreneur and formerly the president of the state Senate.

Northwest College president Lisa Watson said they have been approached by Diamond Wings representatives, but they have yet to find it to be relevant for the college. “Many companies offer internships, but it has to relate to coursework for it to make sense,” she said.

Faculty has also been invited to visit, she said, but the work wasn’t in line with their class work.

During the final day of testimony in front of the House committee, Wyoming Game and Fish Department Director Brian Nesvik emphatically testified that sage grouse are not imperiled in the state and there is no reason to list the bird for protections under the Endangered Species Act. He attributed current dips in population to normal cycles in the species’ numbers. But in an interview after the bill advanced, former state sage grouse program manager Tom Christiansen said Nesvik was disingenuous in citing the current trough in the cycle as normal.

“The picture is not rosy,” Christiansen said.

Others concur with his observations, including the previous program manager. Shortly before Leslie Schreiber resigned as state sage grouse program manager, she sounded the alarm that current chick survival surveys and lek counts are “outside cyclical trends.”

“Based on the data in hand, Wyoming sage grouse populations are heading back to mid 1990s levels, which is alarming,” she told WyoFile. “This is particularly concerning because it does not follow the historic patterns of population cycles in the state.”

Despite extensive testimony from experts, legislators largely ignored the scientific community and wildlife advocacy groups in passing the bill. “Science should be used to inform the decision making process,” Christiansen said.

Bear, the  Diamond Wings Upland Game Birds manager, was fairly confident the extension would pass and is looking forward to Gordon signing it into law in the coming days.

Five years ago, former governor Matt Mead allowed the bill to become law, but refused to sign it, saying “Concerns have been expressed about disease control, genetic diversity, survivability of the released birds, and timing, location and method of egg collection.”

In the first five years of the law, Diamond Wings struggled to build the expensive facility in accordance with Game and Fish regulations and find nests with viable eggs to harvest. They finally collected their first wild eggs last spring, harvesting 133 eggs and successfully hatching 119. Unlike other game birds already being raised by the facility, each nest of wild eggs collected had to be hatched according to their own timetable, forcing Bear to watch their progress non-stop for weeks.

“That room was my foxhole,” Bear said recently, admitting he prayed for guidance during the sleep-deprived period.

Now he’s thankful to have enough time to succeed with captive breeding — his next great challenge — and hopes the research project will lead to a better understanding of the process, should it be used in the future to help understand the species.

Critics worry the farm-raised birds will be released for hunting opportunities or to mitigate losses in habitat due to energy exploration, exposing wild populations to possible farm-borne disease. But Bear is insistent his stock and future broods are under tight regulations by Game and Fish and can’t be released without permission.

“This is not a project to raise birds we can shoot,” he said.

The birds represent a large investment, mostly paid by the Western States Sage Grouse Recovery Foundation, a 501(c)(3) nonprofit organization founded by True. He testified the foundation and company has spent about $550,000 on the project and that the research being done at the farm is “not for commercial purposes.”

There are currently 51 grouse in flight pens just west of the Powell city limits. The young birds are now breeding, Bear reports, and he’s taking every precaution to stave off outside influences that may stress his broodstock.

He also daydreams of further investment in the area after he proves the experiment successful.

“The Powell Sage Grouse Research Center sounds great to me,” Bear said, though he would be happy to simply disprove the farm’s critics.