Roughly 61% of residents and business owners in Cooke City, Montana, recently said they support finding a way to keep the Beartooth Highway open year-round between the Chief Joseph Scenic Byway and … 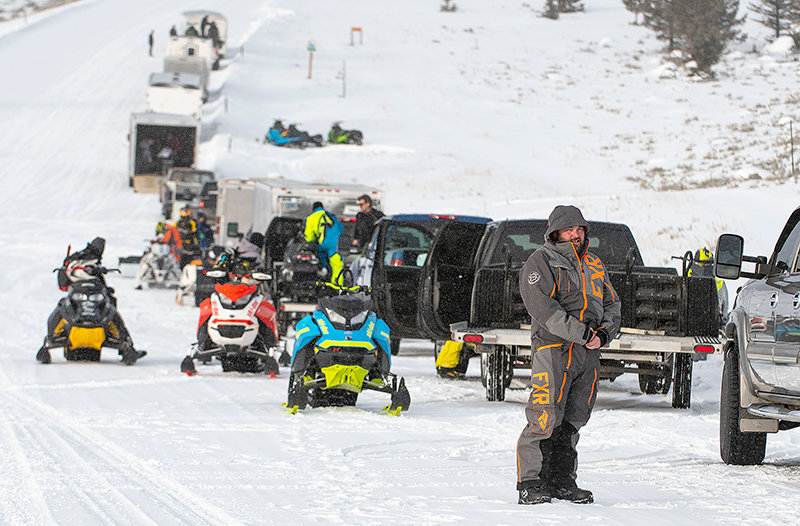 Powell snowmobiler Andy Metzler prepares to head out of the Pilot Creek parking area on a 2020 trip. The Beartooths are a popular area for snowmobilers, but some believe the highway should be plowed to Cooke City, Montana, to open up winter opportunities for those in wheeled vehicles.
Tribune file photo by Mark Davis
Posted Thursday, January 27, 2022 8:25 am
By Mark Davis

Roughly 61% of residents and business owners in Cooke City, Montana, recently said they support finding a way to keep the Beartooth Highway open year-round between the Chief Joseph Scenic Byway and the town. Whether the apparent shift in sentiment in Cooke City will lead to more plowing remains to be seen.

Affectionately called “the Plug,” the 9.3 miles of unplowed road starts at the Pilot Creek parking lot and ends at Cooke City.

During the winter, trucks with trailers built for snowmobiles stack up near Pilot Creek, northwest of the junction of U.S. Highway 212 and the Chief Joseph byway (Wyo. Highway 296). On weekends, 100-150 vehicles use the parking area. Take a right on your sled and you are in the High Lakes area of the Beartooth Mountains — one of the most popular snowmobile meccas in the West. Take a left and you will eventually end up in Cooke City, near Yellowstone National Park.

With the Plug blocking vehicle traffic to the east, the only way out of Cooke City in the winter is to the west, along normally plowed roads that lead through Yellowstone’s Northeast Entrance to Mammoth Hot Springs and destinations to the north in Montana. That includes Livingston — currently the closest city with medical facilities and the conveniences of a larger retail community.

In a recent letter to Montana Gov. Greg Gianforte, Briggs said the time saved each way could mean the difference between life and death in a medical emergency and allow businesses to stay open during winters.

“The livelihood and health and safety of our towns is dependent on being able to keep Highway 212 (the Plug) open year-round,” Briggs wrote in the letter.

Of 216 ballots mailed out last fall in the Cooke City vote, 140 ballots were returned, with 86 votes in favor of plowing, 52 no votes and two blank ballots.

The results mirror a previous survey taken last year and are similar to survey results from 2017, said Rick Hoeninghausen, director of sales and marketing for Xanterra Parks & Resorts at Yellowstone.

Hoeninghausen said one of the reasons for the changing attitude toward plowing may be due to changing ownership for businesses in the Cooke City area.

“There has been some turnover of businesses with a lot of newer owners now. That’s perhaps contributing to this — where this is going now,” he said, adding that he thinks plowing “provides tremendous opportunities for Park County, Wyoming, and Cody, and the communities in Wyoming around our county to establish a much, much better, more robust winter business than we have now.”

The state of Wyoming recently calculated nonresident visitors traveling along the Beartooth Highway have close to a $53 million impact. The survey questioned a percentage of visitors spending at least an hour in Northeast Entrance gateway communities.

However, the issue is complicated, with Hoeninghausen describing it as an “arm wrestling match that has gone on for quite a few years.”

Hoeninghausen is a member of the Park County Travel Council and spoke on the topic at the council’s January meeting, but plowing the Plug is not a cause supported by the council at this point and the presentation was done solely for informational value, a council member clarified.

Business owners and outdoor winter recreationists who rely on the Plug as a popular snowmobiling trail have resisted plowing for decades. The issue is also complicated by the multiple state and national entities involved in the issue, including two counties, two national forests, two states, two departments of transportation, Xanterra and the National Park Service.

Hoeninghausen said the debate is clouded by long-held beliefs that wrongly sway stakeholders.

For example, he said there’s a possibility that sleds could coexist with a plowed road.

There is some hope an adjacent trail could be cut for snowmobile enthusiasts, depending on federal laws meant to protect wildlife like the threatened Canada lynx. If a new trail is not an option, there is also a possibility there would be room in the margins for sleds to get through the Plug, Hoeninghausen said.

But most local sled owners, including many members of the Cody Country Snowmobile Association (CCSA), are sensitive to the debate after seeing their access to the forest shrink over the years. The last big fight over access came while the Wyoming Public Lands Initiative looked into the High Lakes Wilderness Study Area, with some members of the committee seeking to further limit access.

“We have no interest in giving up any territory we have historically used,” CCSA member Dustin Rosencranse said during one of numerous debates over the area’s winter-use rules.

Yet the debate over the Plug isn’t just about access for recreation, said Powell resident and snowmobile enthusiast Tim Metzler.

Metzler said he’s also concerned by heavier traffic on the roads through the Sunlight District and into the park should the Plug be cleared. He imagines losses to wildlife will be higher, while drivers unaware of the dangers of driving the remote, mountainous route would see it listed as open on their mapping apps and find themselves unprepared, in less than adequate vehicles.

“It just dumps snow up there,” Metzler said, adding “It completely buries some of the cabins.”

He also said additional visitation would cause more problems for sewage lines in Cooke City, which are strained during the winter months.

And one of Metzler’s primary concerns is the expense of plowing. “The cost is huge compared with the money made from selling a few more hamburgers.”

The area is often covered in several feet of snow, which would mean constant plowing — similar to the effort it takes to keep the Togwotee and Teton passes open to automobile traffic in the Absaroka Mountains outside of Dubois, Metzler suggested.

The Wyoming Department of Transportation spends about 30% of its budget keeping Wyoming roads open through the winter. The number fluctuates depending on the amount of snowfall, but averages somewhere around $28 million to $30 million per year, according to the department.

Yellowstone National Park spends about $300,000-400,000 a year plowing and maintaining the highway from the Northeast Entrance to Cooke City. The state of Wyoming estimates it would need to spend about the same amount if it decided to maintain its section of U.S. 212, with about half being spent on plowing. But that pales in comparison to hiring new employees and buying equipment, said Cody Beers, senior public relation specialist for WYDOT.

Currently, Park County plows the highway from its junction with the Chief Joseph Scenic Highway (Wyo. 296) to the Pilot Creek parking area, costing about $35,000 per year in labor, equipment, fuel and other expenses.

Hoeninghausen hopes Wyoming and Montana would share some of the costs of keeping the Plug open — if Wyoming officials buy into the idea that the state will benefit from the change.

Past efforts to plow the Plug have fizzled. Because the roadway runs through various federal lands, Wyoming’s efforts to secure stable funding to improve the Beartooth Highway over the years has been difficult, despite ongoing efforts, according to a 2019 WYDOT report.