While the Powell Pioneers Legion Baseball team is no longer perfect, they continued their winning ways this past weekend.

Powell picked up two wins in a three-game weekend, defeating the Billings … 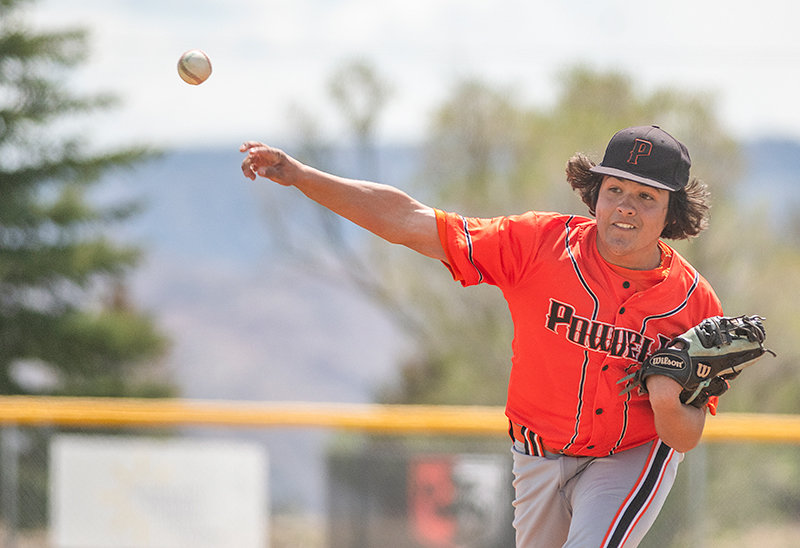 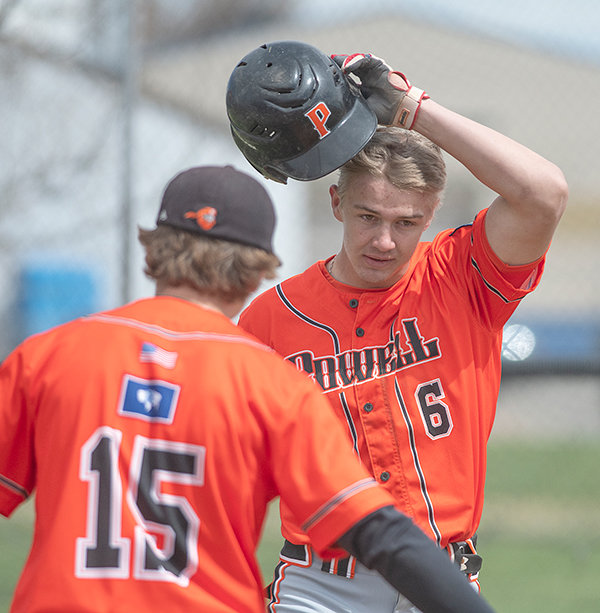 Kobe Ostermiller celebrates with Brock Johnson after scoring a run against the Billings Cardinals on May 8. Ostermiller had a standout hitting performance Sunday, going 4-for-5 with two doubles.
Tribune photo by Carson Field
Previous Next
Posted Thursday, June 3, 2021 8:25 am
By Carson Field

While the Powell Pioneers Legion Baseball team is no longer perfect, they continued their winning ways this past weekend.

Powell picked up two wins in a three-game weekend, defeating the Billings Halos 6-2 in nine innings on Sunday after splitting a Saturday doubleheader against the Billings Cardinals.

In the Pioneers’ first game Saturday, stellar pitching from Brock Johnson kept the Cardinals in check. The freshman threw a complete game shutout, allowing no runs and just four hits.

Johnson is 2-0 to start the year and has yet to allow a run. Even with the Cardinals in scoring position a couple of times, Johnson got the job done and never faltered.

“His confidence is great right now, and his athletic ability is amazing,” manager Joe Cates said. “He got himself out of jams and stepped up when he needed to.”

Offensively, the Pioneers did enough to pick up the 4-0 win. They recorded six hits, which led to the four runs. Kobe Ostermiller was the only Pioneer with multiple hits on the day.

Game two marked Powell’s first loss of the 2021 season, with the team falling 11-3. The Pioneers’ pitching staff struggled with command in the first inning, allowing several hits and walks, leading to the Cardinals crossing the plate six times in the opening frame.

“We struggled throwing strikes. That was our biggest thing,” Cates said. “Take away the walks and it’s a completely different ballgame.”

Billings added five runs later in the game, creating an insurmountable deficit for the Pioneers. Even though Powell eventually notched three runs, it wasn’t enough, as the Cardinals took the eight-run win.

The next day, the Pioneers finished the weekend on a high note. Quality at-bats and a strong performance from hurler Kolt Flores led to the 6-2 win over the Halos.

Flores threw all nine innings in just 99 pitches, allowing two runs and only four hits. Despite a release Cates described as “funky,” Flores has been a reliable arm for the Pioneers early in the season.

Ostermiller had another efficient performance at the plate, going 4-for-5 with two doubles. Brock Johnson and Cade Queen also swung hot bats, each logging two hits.

A senior, Ostermiller has made the most of his final season of legion baseball thus far, posting several multi-hit games.

“He’s just seeing the ball well right now,” Cates said. “His confidence, he knows he can hit. It doesn’t matter what the pitch is, he just hits the ball.”

At 10-1, the Pioneers have been one of the best American Legion teams in the state, but Cates still sees several areas in which the team needs to grow. Specifically, he wants his arms to throw strikes more consistently and for his entire lineup to improve its approach at the plate.

Powell was supposed to play a doubleheader against the Billings Expos on Tuesday, but that was canceled with no make-up date currently set.

Before conference play begins, the Pioneers will play two tournaments. They’re headed to Riverton on Friday for the Roy Peck Wood Bat Tournament, where they will play four games.