Consistent pitching has been the key to the Powell Pioneers’ hot start in 2021, and that didn’t change at the Roy Peck Wood Bat Tournament. 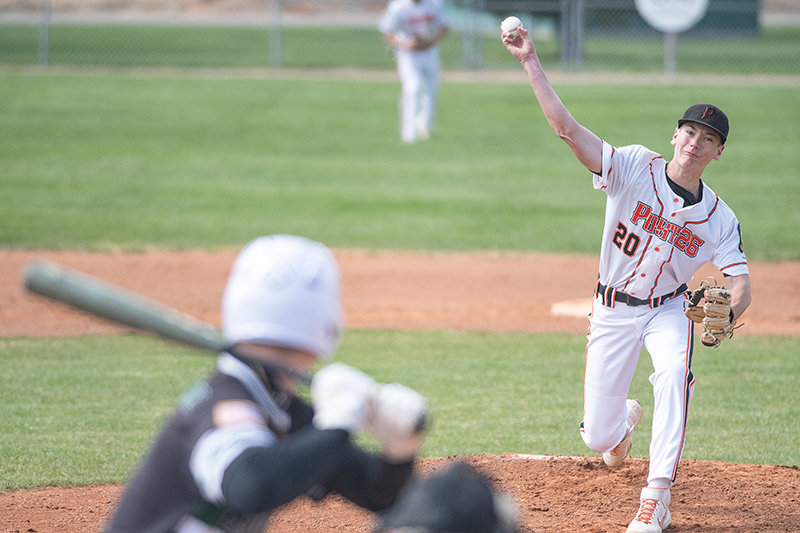 Trey Stenerson pitches in the Pioneers’ game against the 406 Flyers earlier this year. The Pioneers were excellent on the mound over the weekend, propelling them to two wins at the Roy Peck Wood Bat Tournament.
Tribune photo by Carson Field 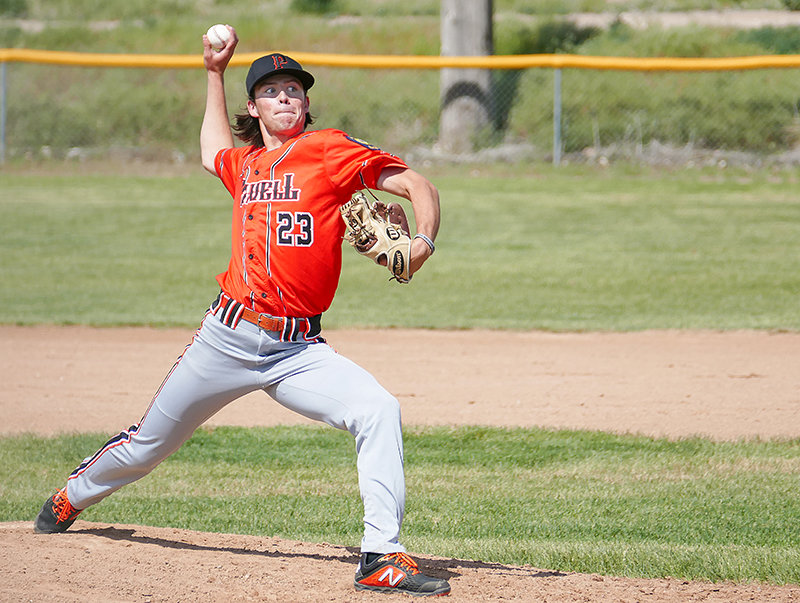 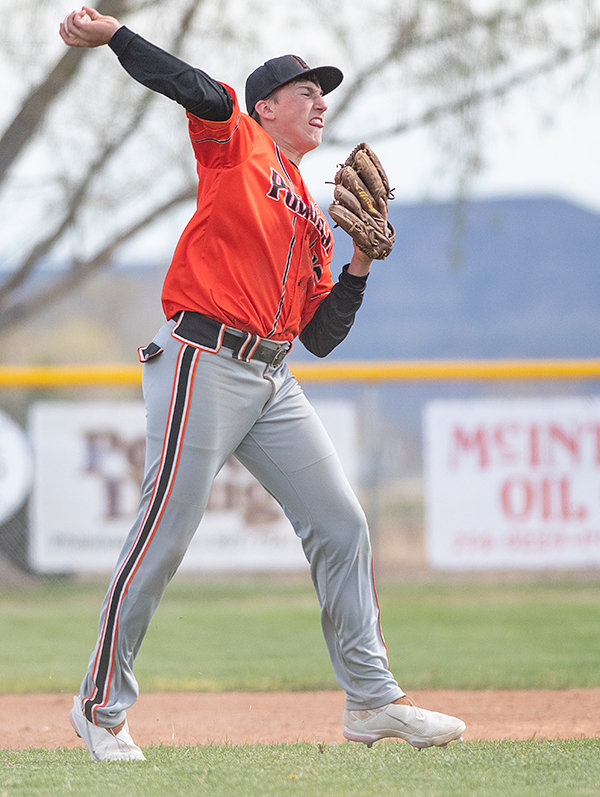 Cade Queen makes an off-balance throw in a game earlier this year. Now 12-2, Powell manager Joe Cates said the team can be one of the best in the state if it consistently performs well in every area.
Tribune photo by Carson Field
Previous Next
Posted Tuesday, June 8, 2021 8:15 am
By Carson Field

Consistent pitching has been the key to the Powell Pioneers’ hot start in 2021, and that didn’t change at the Roy Peck Wood Bat Tournament.

Powell’s American Legion baseball team won two out of three games at the tourney in Riverton, defeating Rawlins (10-0) and Riverton (2-0) Saturday before falling to Casper (7-6) on Sunday. They are now 12-2 after more than a month of baseball.

In game one, senior Landon Sessions set the tone on the mound early on.

He surrendered just two hits in six innings of work, throwing a complete game. Those two hits were Rawlins’ only baserunners, and Sessions threw 14 first-pitch strikes.

It was only Sessions’ second appearance of the 2021 season, but manager Joe Cates said he will be a promising arm going forward.

“His ability to pound the strike zone is amazing — he’s very effective,” Cates said. “He threw his fastball and curveball for strikes and kept hitters off balance.”

Offensively, the Pioneers posted five runs in the first three frames, giving them an early cushion. They built onto the advantage in the subsequent innings, allowing Powell to exercise the 10-run mercy rule. Trey Stenerson had the most hits with three, while Dillon Payne and Cade Queen had two each.

Though Powell’s offense stalled in the second game, Brock Johnson controlled the game on the bump.

He threw a seven-inning complete game, striking out 14 and allowing only one hit. In four appearances this year, Johnson has yet to allow a run, and Saturday was his third complete game.

The Pioneers logged just three hits in the win: two from Stenerson, one from Kobe Ostermiller. While they never found a rhythm in Saturday’s second game, these hits — along with timely walks and Riverton errors in the seventh inning — allowed them to prevail and reach the championship game.

Against the Casper Crush on Sunday, Powell showed promise in several areas. The Pioneers doubled Casper’s hit total, recording 14 base knocks, and Kolt Flores and Mason Marchant threw “very well,” according to Cates.

But miscues in the field proved to be the difference. Powell committed six errors, keeping the Crush in contention for the entire nine-inning game despite the Pioneers outperforming them at the plate. All it took was one swing of the bat, as Casper hit a walk-off home run in the bottom of the ninth, handing Powell its second loss of 2021.

“I know we’re capable of great things in the field,” Cates said. “We need to get our guys some more reps, and specifically, more reps in the infield.”

Overall, Cates said the team performed well at the plate but needs to become more consistent. The coach noted strikeouts as an issue and he “wants to see guys putting the ball in play with runners in scoring position.”

That said, he singled out several individuals who were excellent at the Riverton tourney. Stenerson was Powell’s standout at the plate, said Cates, “He swung the bat great and hit hard baseballs to dead center.” Others who “swung fairly well” were Ostermiller and Johnson, according to Cates.

Powell showed flashes at the plate, in the field and on the mound in its three weekend games. If the Pioneers can put together all three on a regular basis, they can build on these impressive first 14 games.

“We just need to get more consistent as a team,” Cates said.

Next up is a road trip to Watford City, North Dakota, where the Pioneers will play four games against teams from the Great Plains.