It has been a rough stretch for the Powell Pioneers.

After starting the 2020 season 6-3, the A team has dropped six games in a row. Most recently, the Pioneers got swept in doubleheaders against … 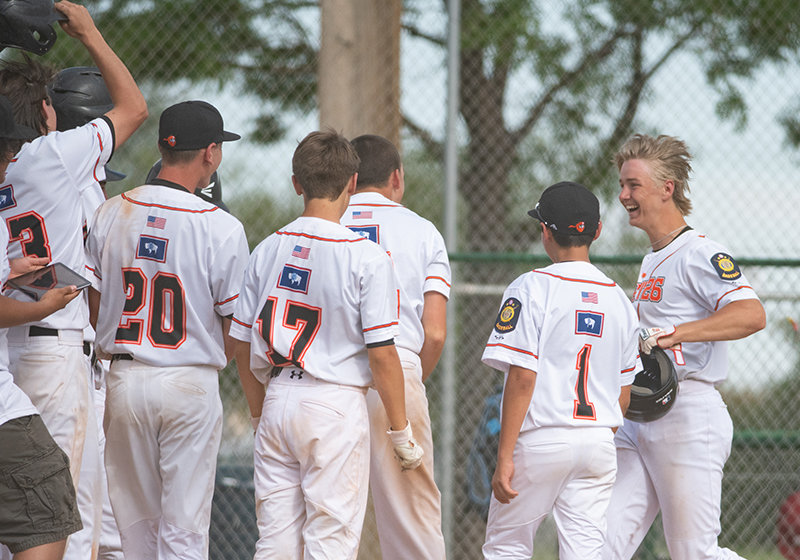 Outfielder Kobe Ostermiller is congratulated by his teammates after hitting his first career home run on Saturday — a grand slam against the 406 Flyers of Billings. After losing four games last week, the Powell Pioneers sit at 6-9 on the season.
Tribune photo by Carson Field
Posted Tuesday, June 30, 2020 8:10 am
By Carson Field

It has been a rough stretch for the Powell Pioneers.

After starting the 2020 season 6-3, the A team has dropped six games in a row. Most recently, the Pioneers got swept in doubleheaders against the Cody Cubs and the 406 Flyers of Billings.

The first three games were especially ugly. Opponents outscored Powell 43-5 in the Thursday and Saturday contests, and the Pioneers logged just one extra-base hit (a Colin Queen double).

However, the Pioneers showed signs of life in Saturday’s second contest against the Flyers, twice rallying from big deficits to make a game of it.

At the beginning of game two, it appeared the Pioneers were destined for more of the same. They entered the bottom of the fourth in a 6-0 hole, well on their way to another mercy rule.

But then the bats woke up.

But in the top of the fifth, 406 retained its lead. The Flyers scored nine runs in the frame, giving them a 15-6 advantage.

Once again, the lead seemed insurmountable. But the Pioneers answered with another offensive spark.

They crossed the plate twice with one out and loaded the bases, bringing up Kobe Ostermiller. With a 1-2 count, the outfielder belted a grand slam to left field — his first career home run.

“It just felt like a dream; running around the bases; it didn’t feel real,” Ostermiller said. “I kind of knew. I went to first base and coach was telling me to keep running, but I was like, ‘Eh, I think that might be gone.’”

Unfortunately for the Pioneers, they couldn’t ride this surge into the final two frames, as they failed to score again. As a result, Powell lost game two, 15-12.

While it wasn’t the desired result, game two certainly represented progress from a dreadful first three games of the weekend. Head coach Joe Cates hopes the mid-game spark serves as momentum as the season progresses.

“They know that they have the ability to put the ball in play, have quality at-bats,” Cates said. “I think it’s a positive thing.”

Powell had started its Saturday doubleheader against the Flyers on the right foot. In game one, the Pioneers scored three runs in the first inning off of three hits and two walks, giving them an early 3-0 lead.

But then things unraveled.

Defensive struggles and inconsistency on the mound allowed the Flyers to have a field day at the plate. Powell committed six errors and surrendered 10 hits, which fueled the Billings team’s efficient offensive performance.

Powell scored once more in the fifth inning, but it was too late, as the Flyers sealed an 18-4 win via mercy rule.

As for Thursday’s doubleheader against Cody, the Cubs stormed out of the gates offensively, putting up a four-spot in the first inning of game one. The Cody squad built on the early advantage steadily, scoring two runs in the third and nine runs in the fourth.

With no offensive answer from the Pioneers, the Cubs — who hosted the games due to soggy conditions in Powell — ran away with a 15-1 victory in mercy-rule fashion.

Powell failed to cross the plate and gave up eight runs in the first two innings. Once again, the Pioneers were victims of the mercy rule, losing 10-0.

Powell was slated to play a doubleheader against Green River on Sunday, but rain canceled those contests less than a half inning into game one.

The Pioneers were slated to play an A/B mixed squad doubleheader against Lovell on Monday evening.

Lovell scored seven runs in the sixth inning to come from behind and upend the Powell American Legion C team 13-8 in the second game of a Saturday doubleheader at Powell.

Powell managed only four hits in the first game, but collected 12 hits in game two and led most of the way until Lovell erupted in the sixth.

“That’s when we started to struggle on the mound,” said Pioneer C coach Tyler Feller. “It wasn’t that we were walking a lot of guys. They were just getting good hits when they had runners on.”

Cole Fauskee and Alex Jordan each had three hits to lead the Powell C team at the plate in the second contest. Trevion Solberg and Jordan Loera had two-hit games.

A doubleheader with Cody was rained out Wednesday.