After a losing stretch, baseball was fun again for the Powell Pioneers on Monday.

Fueled by consistent pitching and sound plate appearances, the Pioneers swept the Lovell Mustangs in a … 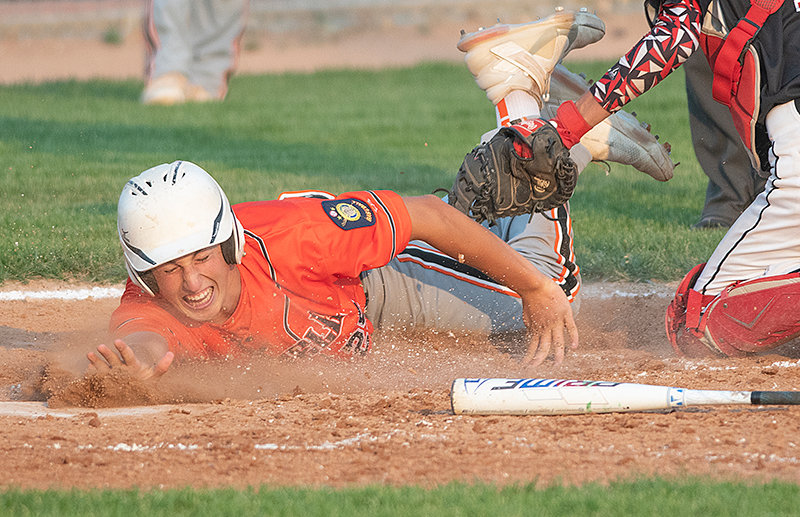 Cade Queen tries to avoid a tag in Monday’s doubleheader against the Lovell Mustangs. Powell swept the Mustangs, improving to 27-9 overall and ending a four-game skid.
Tribune photo by Carson Field 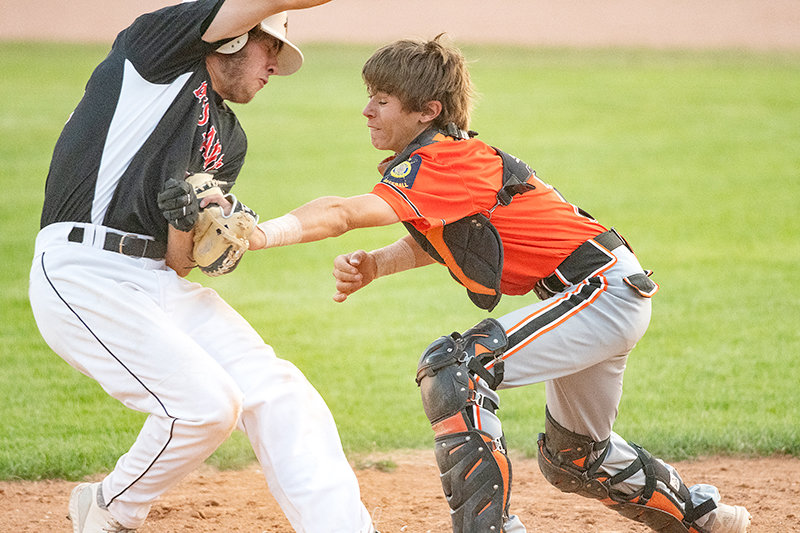 Catcher Brody Payne tags a runner out at home plate in game two of Monday’s doubleheader at Lovell. The Pioneers showed improvement in the field on Monday, as they didn’t allow errors to snowball.
Tribune photo by Carson Field
Previous Next
Posted Thursday, July 15, 2021 8:20 am
By Carson Field

After a losing stretch, baseball was fun again for the Powell Pioneers on Monday.

Fueled by consistent pitching and sound plate appearances, the Pioneers swept the Lovell Mustangs in a doubleheader, 5-1 and 8-1. The wins broke a four-game losing spell and improved their record to 27-9.

After rough outings on the mound in the prior four contests against Cody, Powell’s pitching kept the Mustangs in check for the entirety of Monday’s games in Cowley.

In game one, Cade Queen and Brock Johnson allowed just five hits and one run, combining for nine strikeouts. Queen earned the win, while Johnson notched the save.

Mason Marchant and Kolt Flores took the mound in the second game, surrendering only three hits. Lovell’s only run came in the first inning, then Marchant and Flores kept Lovell scoreless the rest of the game. Marchant was the winning pitcher.

“I think them being able to pound the zone and stay consistent is going to play huge for our pitching staff,” Cates said.

Between the two games, the Pioneers committed five errors in the field. Though that figure is still higher than Cates would like, the team showed its ability to regroup after miscues — unlike the Cody games, where poor defense seemed to snowball.

“Our defense played well tonight,” Cates said. “They were good, hard-effort errors, and that instills confidence with our pitchers that they can throw strikes and not have to worry about balls in play. The next play we would make the play that needed to be made.”

“They stayed confident and hit the ball well tonight,” Cates said. “We weren’t trying to do too much, and we hit the ball where it was pitched.”

Opposed to the offensive stagnancy that plagued the Pioneers in recent weeks, they showed similar dominance in the batter’s box that was on display in the first 25 games of the season.

Breaking a losing streak wasn’t the only thing Powell played for on Monday. The Pioneers took the field in honor of outfielder Keaton Rowton.

An incoming Powell High School senior, Rowton was life flighted to a hospital in Denver last weekend after blood clots were discovered in his heart and arm. After a few days in the hospital, Rowton was on hand to cheer on his team.

“I think it fired us up,” Cates said. “Everyone loves Keaton and his presence was something for the kids to fight for. To know that he’s OK and we’re going to have him around is awesome.”

The regular season is now in the rearview mirror.

The Pioneers return to Cowley this weekend for the conference tournament. Their first game is against Buffalo, who they have beat four times already this year. The game is scheduled for 4 p.m. on Friday.

Based on the team’s energy in the wins against Lovell, Cates feels good about where his team stands entering the postseason.

“I have a lot of confidence,” he said. “Watching them swing tonight and watching them sit back on pitches, my confidence is high right now. I want us to stay here and keep getting better.”