The Powell Pioneers entered game two of Wednesday’s doubleheader against Lovell with a chip on their shoulder.

After leading 3-0 in the sixth inning of game one, fielding miscues and timely … 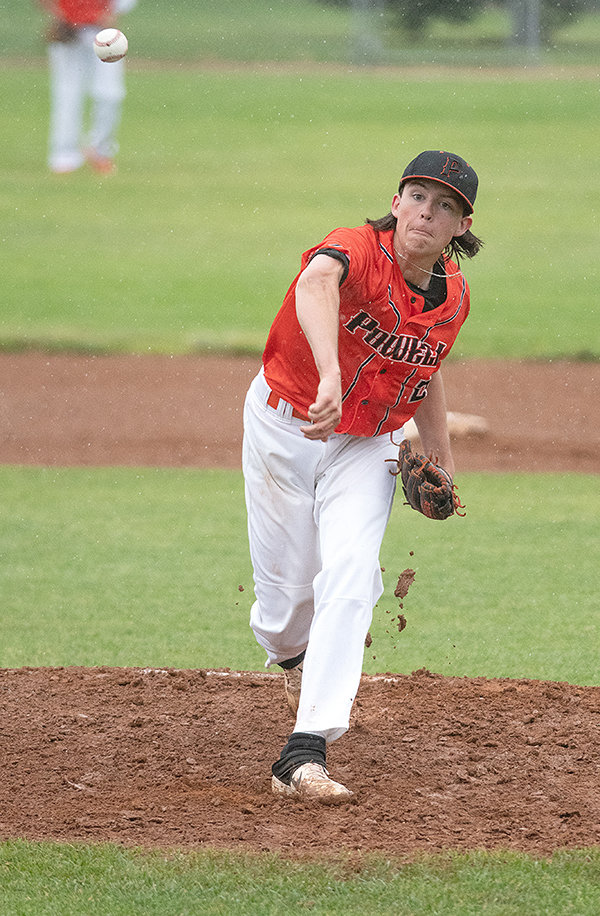 Powell Pioneer Landon Sessions delivers a pitch during a contest earlier this season. On Wednesday, the Pioneers bounced back from a game one loss against Lovell with a 12-run first inning in game two.
Tribune photo by Carson Field
Posted Tuesday, July 7, 2020 8:10 am
By Carson Field

The Powell Pioneers entered game two of Wednesday’s doubleheader against Lovell with a chip on their shoulder.

After leading 3-0 in the sixth inning of game one, fielding miscues and timely hitting from the visitors cost Powell the game. It marked the Pioneers seventh loss in a row and was a devastating way to lose.

But they didn’t dwell on it.

“I had to be the older team leader and remind them that you have to stay locked in,” pitcher and outfielder Colin Queen said. “It’s a brand new ballgame; it’s just a matter of getting locked in.”

Powell jumped out of the gates quickly in game two. Taking a 12-1 advantage in the first inning, the Pioneers created an insurmountable barrier between them and Lovell.

Altogether, the Powell squad combined for 12 hits in game two, helping them cruise to a 17-3 win. Despite the game being shortened due to mercy rule, every player in the starting lineup tallied a base hit, and all but one logged an RBI.

This offensive onslaught came less than an hour after Powell gave up five runs in the seventh inning to lose. But rather than hanging their heads after the defeat, head coach Joe Cates thinks the late-game collapse actually fueled the efficient start to game two.

“I think that fired them up enough to come back out and say, ‘This is who we are, and this is how we should be playing things,’” Cates said. “Both those games should’ve been ours and they know that.”

Cates attributed the successful night at the plate to a combination of a patient approach and inconsistency on the hill from Lovell.

“We were able to take advantage and build momentum off of that,” he said. “Just being able to keep that momentum and keep going and keep putting pressure, they [the Pioneers] did a great job of that ...”

Following the win, Powell is now 7-10 overall on the season. The Pioneers had the weekend off before resuming play today (Tuesday) against Riverton.

Heading into the final stretch of the season, Cates hopes the team uses last week’s 17-3 rout of Lovell as fuel.

“With the win tonight and the way we played today — putting the ball in play, hitting with runners in scoring position, pounding the strike zone, throwing strikes — it’s just a confidence thing,” Cates said. “They’ll build confidence there, the ability to know they can do it, and hopefully we can just keep building off of that.”

Added Queen, “When we come back next week, we’ll be fresh and ready to go.”