Baseball fans won’t have to wait long to see the first pitch thrown in Powell.

The Pioneers open up the season on Saturday at home against Miles City, with the B team playing at 11 a.m. and … 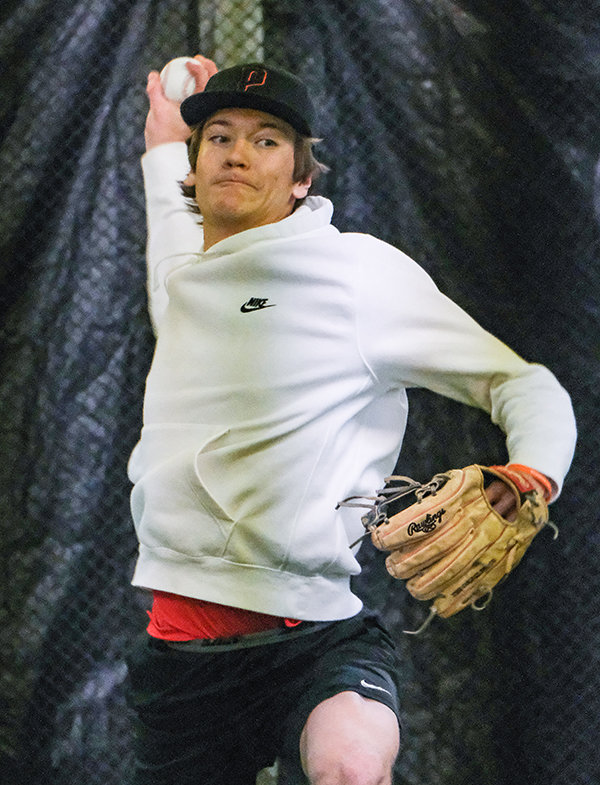 Trey Stenerson winds up to pitch as the Pioneers gear up for their season during a Tuesday practice indoors. The baseball teams open the season on Saturday against Miles City.
Tribune photo by Seth Romsa
Posted Thursday, April 7, 2022 8:10 am
By Seth Romsa

Baseball fans won’t have to wait long to see the first pitch thrown in Powell.

At the helm this season for the Pioneers will be a new but familiar face in head coach Jason Borders, who returns to the position after a seven-year absence.

Borders was hired in October, after the Powell Pioneers Legion Baseball Board voted not to renew the contract of former manager Joe Cates in August 2021.

Heading into the season, Borders has high hopes for a young Pioneers team that will feature almost entirely sophomores until the current high school sports season ends.

“Early, we just need to figure out who we are,” Borders said. “We lost four or five guys from last year and we will have a few new guys stepping in to take those spots.”

Nearly every player on the roster pitches and Borders expects his team to play good defense. The manager feels the main uncertainty for his team in the early goings is hitting, but that’s something he believes will develop throughout the season.

Heading into the first weekend, Borders does not expect to throw too many pitches with his rotation; he plans to give everybody an inning or two to pitch in order to get the team back into the swing of things early in the season.

Last year the Panthers finished with a 31-12 record, being eliminated after winning one game at the state tournament.