After a rocky start to the American Legion Baseball West District Tournament in Cowley, the Powell Pioneers steadied the ship to earn a trip to state. 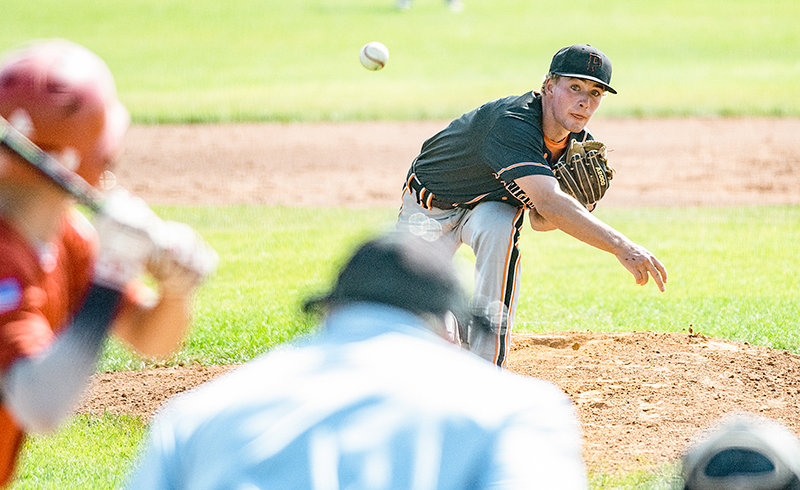 Mason Marchant pitches to a Rawlins batter in Saturday’s district tournament game. Marchant threw a no-hitter in the 11-1 win, the first of his career.
Tribune photo by Carson Field 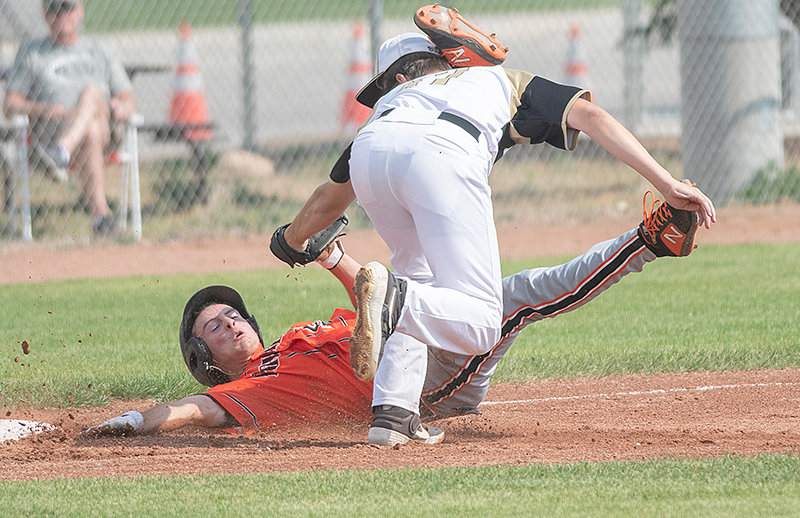 Landon Sessions tries to avoid a tag at third base against Buffalo in Powell’s first game of the district tournament on Friday. Powell beat Buffalo 19-7.
Tribune photo by Carson Field 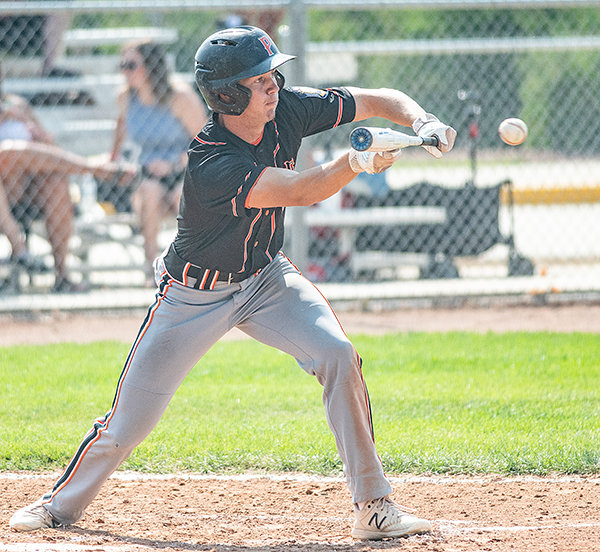 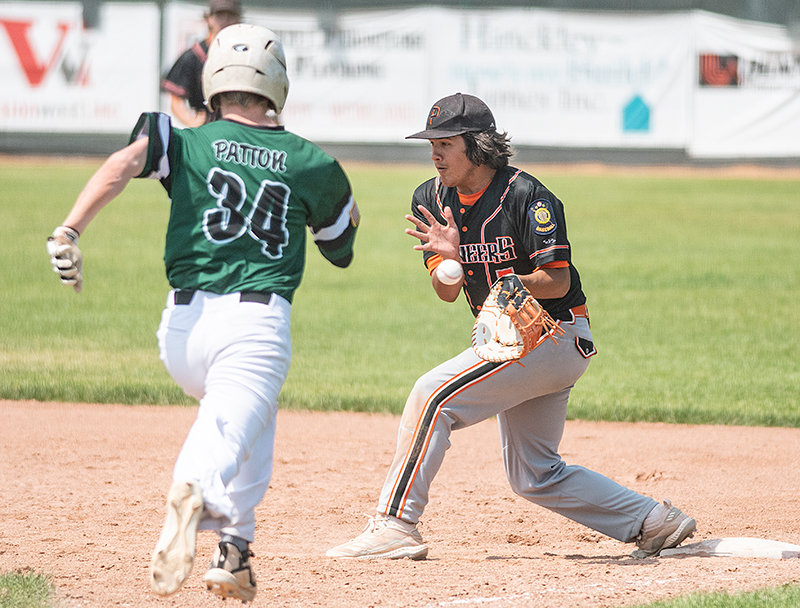 First baseman Kolt Flores attempts to catch a ball in the seventh inning of Saturday’s game against Green River. Powell’s only loss of the weekend came to the Knights, who walked it off in the final inning.
Tribune photo by Carson Field
Previous Next
Posted Tuesday, July 20, 2021 8:20 am
By Carson Field

After a rocky start to the American Legion Baseball West District Tournament in Cowley, the Powell Pioneers steadied the ship to earn a trip to state.

Powell defeated Rawlins (11-1) Saturday afternoon to secure a spot at the state tournament and followed that with a win Sunday over Lovell (13-6). Before that, the Pioneers went 1-1 to start the weekend, besting Buffalo (19-7) on Friday before losing to Green River (4-3) Saturday morning.

Just like Powell’s first four games against Buffalo, the Pioneers didn’t have any trouble on Friday.

It was an offensive onslaught for Powell, as the team recorded 20 hits. Kobe Ostermiller had a team-high five, while Trey Stenerson notched seven RBIs.

In the Pioneers’ four prior games against Buffalo, they scored a combined 69 runs. This familiarity instilled more dominance in the batter’s box on Friday.

“Our guys came in with a lot of confidence,” manager Joe Cates said. “We’ve hit them well before.”

On the hill, Landon Sessions started the game, throwing 3.2 innings. Ryan Cordes relieved Sessions in the fourth and struck out three in 2.1 innings of work.

“Ryan [Cordes] has been consistent in pounding the zone, so I knew that I wanted him to come in, and he did exactly what we needed him to do,” Cordes said.

The next day, Powell got off to another quick start offensively. The Pioneers put up a three-spot in the third inning, giving them an early advantage.

But it didn’t last long. Green River answered with two runs in the bottom of that inning and scored in the next inning to tie the game at three.

As the Knights picked up momentum, Powell’s offense lagged: The Pioneers didn’t score another run.

The Knights notched only two hits the entire game, capitalizing on Powell’s errors and walks. An overthrow — the Pioneers’ fifth error of the contest — ended the game.

“A lot of it’s mental,” Cates said. “They didn’t understand the situations and didn’t communicate, and that cost us.”

With a win and a loss under their belts, the Pioneers’ second game on Saturday was a win-or-go-home situation. They responded with urgency amid the pressure and sauna-like temperatures.

Excellence on the mound, at the plate and in the field allowed Powell to cruise to a lopsided, shortened win over Rawlins, clinching a spot at state.

Mason Marchant tossed the Pioneers’ third no-hitter of the year in the victory. It was the first no-no of Marchant’s career, as he struck out seven in five innings.

While Marchant admitted it was a cool feat, he said his outing could’ve been better.

“I wasn’t happy about my walks; I don’t like giving up runs regardless,” Marchant said. “It’s cool, but I don’t want to be lenient.”

Offensively, the Pioneers teed off on Rawlins’ pitchers, logging nine hits. Stenerson had a team-high three base knocks, while Brock Johnson led the way with three RBIs.

“We knew that we just wanted to go home — it’s too hot outside,” Marchant said. “I love this team, so I wanted to stay alive and go on a fun trip next weekend. We stuck with it and got the W.”

Because the win over Rawlins clinched Powell’s spot at state, there wasn’t much pressure on Sunday. This gave Cates and assistant coach Ryan Brown a chance to experiment with small ball.

Between a handful of extra-base hits and several quality bunts, Powell cruised to a win over the Mustangs.

It moved the Pioneers to 29-10 on the season and clinched the No. 3 seed in the West District. Kolt Flores picked up the win on the bump, while Ostermiller’s three hits led the offensive charge.

Though Sunday’s game didn’t mean too much, it showed the versatility of Powell’s offense.

“It gives our team a lot of confidence, knowing they can bunt, play small ball and swing when it’s needed,” Cates said. “I think it’s awesome for us.”

Nothing in the past matters for the Pioneers. Their sole focus is on the state tournament, which begins Saturday in Cheyenne.

After a 3-1 weekend in Cowley, Cates feels good about where his team stands.

“I feel like we’re in a good spot,” he said. “We had that rough patch; we didn’t play our best game against Green River, I feel like our kids are confident going in.

“I hope we stay even keel in our brains,” he said. “If all goes well, I expect to stay for at least four, five days.”