A season full of inconsistencies nearly resulted in a strong home tournament on Friday and Saturday, as the Powell Pioneers Legion baseball team defeated Riverton 12-9, Green River 15-0 but then lost … 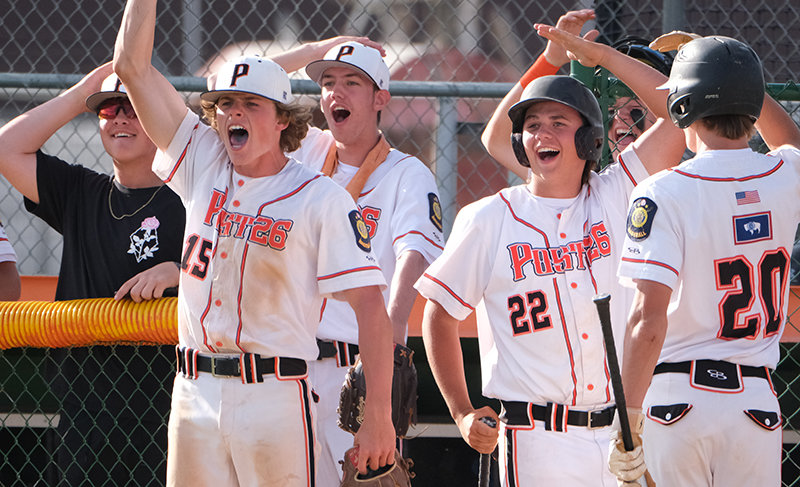 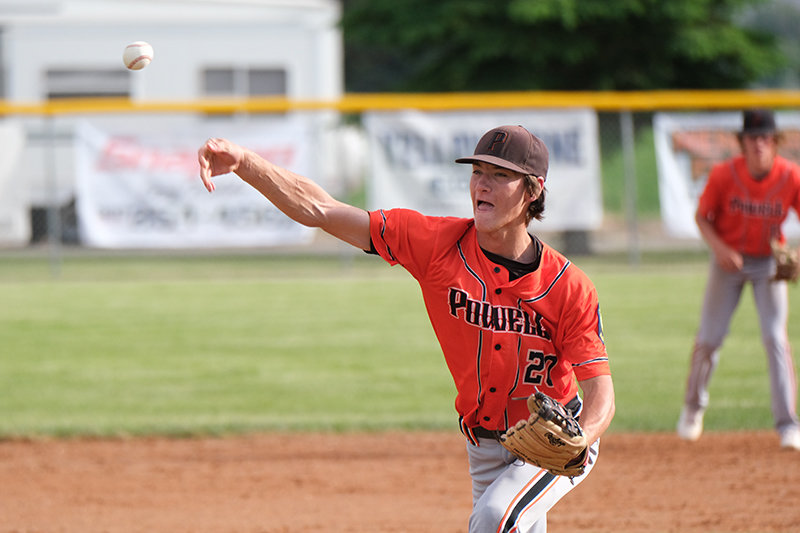 Trying to find some consistency just past the midway point in the season, Trey Stenerson stepped on the mound in relief on Saturday in a 9-0 loss to Miles City.
Tribune photo by Seth Romsa
Previous Next
Posted Tuesday, June 21, 2022 8:20 am
By Seth Romsa

A season full of inconsistencies nearly resulted in a strong home tournament on Friday and Saturday, as the Powell Pioneers Legion baseball team defeated Riverton 12-9, Green River 15-0 but then lost 9-0 to Miles City.

The tournament started bright and early on Friday, seeing the Pioneers (19-16-1 overall, 1-1 A Northwest) go to battle with the Riverton Raiders (8-10 overall).

Early in the contest, the Raiders jumped out to a lead on a single to center field — bringing in two runs to give Riverton a 2-0 lead in the second inning.

Dalton Worstell scored in the bottom half of the inning to get things started for the Pioneers, reaching on an error early in the inning, and scoring on a dropped strike three to cut the lead to 2-1.

Powell took the lead on the next at bat, as a single to center field by Brock Johnson made it 3-2 heading into the third.

Riverton tied the score in the top half of the third on a single.

Two of the first three batters in the third inning were called out, and it appeared the Pioneers were not going to get a run over the plate to take the lead.

A Cole Fauskee error on a ground ball scored a run, starting a long run of advancements for Powell.

A single by Jacob Gibson and Nathan Feller being hit by a pitch brought up Johnson, who drove in Fauskee and Gibson to make it 6-3 Powell.

Another walk to Jhett Schwahn set up Cade Queen, who drove in Feller and Johnson to make it 8-3.

Trey Stenerson hit a double to left field, bringing in Schwahn and Queen and extending the lead.

Aidan Wantulok continued the hitting spree, bringing in Stenerson on a single and continuing the strong third inning.

Finishing off the inning, Fauskee hit a single to bring in Wantulok to cap off the Pioneers nine-run outburst — leaving the score 12-3 after three.

Riverton responded in the fourth, scoring on a triple, single and an error, cutting the lead down to five at 12-7.

Riverton added another run on a single in the fifth, making the score 12-8.

The Pioneer bats went cold, and Riverton continued to cut into the lead.

Riverton scored one more in the sixth, cutting the lead to 12-9 — bringing in Johnson to try to finish the game.

Johnson got three straight batters out — including two strikeouts —  to finish out the sixth inning.

“That was one of those strange games this season that I cannot explain what happened,” Pioneers Manager Jason Borders said. “I feel like we hit the ball really well.”

The game was called before the Pioneers batted in the sixth due to a time limit in the tournament.

A little break while beating the heat allowed Powell to rest before heading into an evening matchup against the Green River Knights (12-17 overall).

This time Powell got on the board first, with a Worstell single bringing in Wantulok, who reached on a leadoff walk to make it 1-0.

Schwahn brought in another run after being hit by a pitch when the bases were loaded, making it 2-0 after two innings.

Gibson started strong for the Pioneers on the mound and continued his play — maintaining perfection through the first three innings of play.

“It’s good to have a good defense behind Jacob [Gibson] because he keeps them off-balance,” Borders said.

On the back of the strong play by Gibson, the Pioneers were set up for another offensive outburst in the third inning.

Stenerson singled to lead off the inning and was brought in by Wantulok on a triple to make it 3-0.

A Worstell hit led to an error, bringing in Wantulok and making it 4-0.

Worstell advanced to second and third on a steal and a wild pitch and was brought in by Fauskee on a fielder’s choice, making it 5-0.

Feller was hit by a pitch, and Johnson singled to load the bases.

Schwahn brought in a pair on a double to right field, continuing to push the envelope for the Pioneers.

Contact by Queen led to an error, bringing in the pair of Schwahn and Johnson to make it 9-0.

A double by Stenerson continued the hit parade, as he and Queen were brought in on another single by Wantulok to make it 11-0.

Wantulok later scored on a wild pitch, extending the lead to 12.

A Johnson double cleared the bases, making it 15-0.

The inning ended with a fly ball to center field, capping off the 13-run explosion.

Gibson’s perfect game ended in the fourth inning, as the leadoff batter reached first on a bunt.

He finished the game by getting the next three batters out, capping off a 15-0 win by reaching the 15-run rule through four innings.

Following the victory, the Pioneers extended their winning streak to five games, dating back to the Billings tournament the weekend prior.

After a strong hitting performance on Saturday, Powell looked to carry momentum into a matchup against the Miles City Outlaws.

This matchup was a test of how far the Pioneers have come this season, running into a rematch of the opening weekend games just over two months ago.

Powell got two players on base in the first inning but was unable to bring them in to score.

Outlaws pitcher Tray Awbrey was dealing early and often, causing Powell to only muster two hits from a Wantulok single in the second and a Schwahn single in the sixth.

“He is easily one of the best pitchers that we have seen this year,” Borders said. “He throws 83 to 85 mph and has a good offspeed. He gave us fits.”

Miles City got on the board first in the second inning, scoring three on Pioneers pitcher Aiden Greenwald.

Greenwald has made a rapid recovery recently, returning to the Pioneer lineup on Friday after he was hit in the head by a baseball during batting practice in Billings. Greenwald had stitches removed around his eye earlier in the day, capping his rapid recovery at a week to help a Pioneer team that has struggled with injuries all season.

The Outlaws extended the lead in the third, putting one more past Greenwald before Stenerson came in for relief.

Miles City put two more on the board, making it 6-0 after three innings.

Kaden Diaz came off the bench in the fifth to relieve Stenerson, and the Outlaws scored three more runs to make it 9-0.

Max Reynolds came on in the sixth inning, allowing one hit but getting three out of four batters out to keep it 9-0.

The game was called in the sixth inning due to the tournament’s run rules.

“I was impressed with Max [Reynolds] and Kaden [Diaz] coming off the bench and pitching well,” Borders said.

Another Sunday game was called off for the Pioneers, as rain canceled the game against the 406 Flyers.

Through four tournaments, the Pioneers have only been able to play four innings of baseball on Sundays due to weather.

After a tournament featuring many highs and lows for the Pioneers, the team will host a pair of conference games this week, going to battle against Lovell (17-9 overall, 1-3 A Northwest) on Wednesday.

“They are good and are playing with a lot of confidence right now,” Borders said. “Lovell is going to be a test.”

Powell and Lovell split the first two matchups in Lovell on June 1, with Borders expecting this matchup to be more difficult as the Mustangs have continued to improve as the month has gone on.

The first pitch on Wednesday is scheduled for 5 p.m. in Powell, and the second game is scheduled to begin at approximately 7 p.m.

Following the Lovell game, the Pioneers will enjoy some much needed rest, taking the rest of the week and weekend off from action.

This rest comes after the Pioneers have played every single weekend since April 24, giving Powell ample time to practice and prepare for Cody the following Tuesday.

“They need a break. They have been going hard since April,” Borders said.