The Powell Pioneers B team’s season came to an end last weekend. 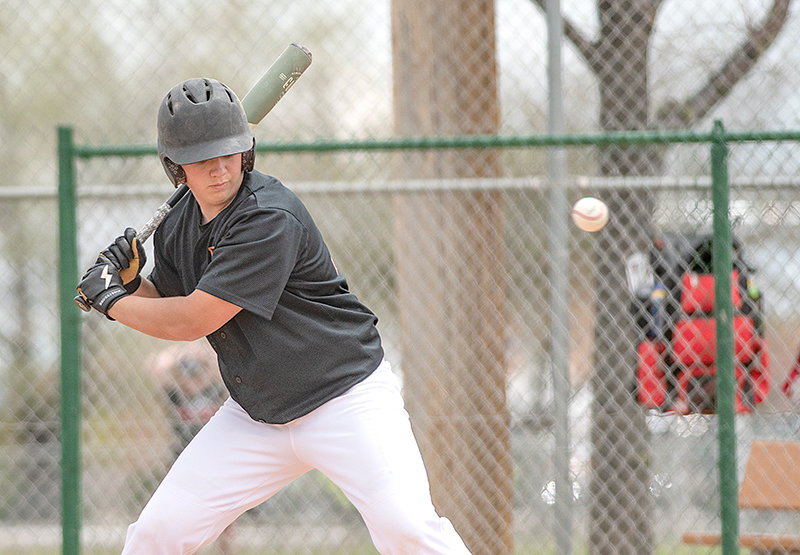 Aiden Greenwald prepares to swing at a pitch in a game against the Lovell Mustangs’ B team in May. Manager Tyler England said the team showed improvement throughout the season.
Tribune photo by Carson Field
Previous Next
Posted Thursday, July 22, 2021 8:05 am
By Carson Field

The Powell Pioneers B team’s season came to an end last weekend.

Powell went 1-2 at the Wyoming American Legion Baseball Class B State tournament in Gillette, beating Bridger Valley 10-9, but falling 10-7 to Cheyenne and 11-1 to Casper. The Pioneers finished the year 15-20.

In the first game, against Cheyenne Post 6 on Thursday, July 15, Powell’s bats got off to a quick start, scoring three runs in the first inning. Pitcher Jacob Gibson kept Cheyenne in check in the first two innings, giving the Pioneers a 3-0 advantage through two.

But in the third, Cheyenne’s bats woke up. Post 6 scored six times that inning to take the lead — one they would not surrender. Though the Pioneers scored a couple more times, it wasn’t enough, as Cheyenne won 10-7.

In a win-or-go-home situation, the Pioneers rallied on Friday. With the game tied 6-6 in the top of the ninth, Aiden Greenwald singled on an 0-2 count to drive in a run and take the lead. The Pioneers scored three more times after Greenwald’s RBI.

Though Powell almost let the lead slip away, the team escaped with a 10-9 extra-inning victory.

“The Bridger Valley game was a battle,” manager Tyler England said. “It became obvious early on that they were going to be a scrappy team with no quit in them. It truly was a war of attrition and I think by the end of the game we were just a little deeper with pitching.”

But on Saturday, Powell didn’t have any of the same energy at the plate. Casper’s arms hardly gave an inch, leading to an 11-1 defeat and elimination for the Pioneers.

“Plain and simple we just didn’t do enough at the plate to give ourselves a chance in that game,” England said.

At 15-20, the Pioneers had ups and downs this year. They showed improvement throughout the season and earned hard-fought wins over strong teams, such as Cody and Lovell. England admitted that not all of his “high expectations” were met, but he still saw the 2021 campaign as one of great growth.

“The amount all the boys grew in the baseball IQ department was impressive and will serve them well going forward,” he said. “Overall, the season went well.”

Before 2022 rolls around, England said he hopes to see continued growth from his players, both on and off the field.

“I would just hope that the boys fully apply themselves to whatever they’re doing,” England said. “Whether it’s school, a job, working out, or other sports, I hope they take anything they do seriously, and realize that they’ll get out exactly what they put into it.”