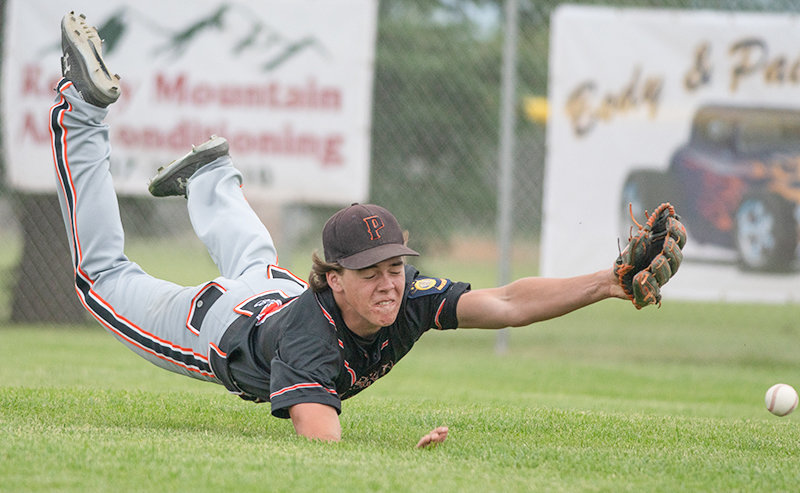 Outfielder Ryan Cordes lays out for a ball Wednesday against the World Showcase team. After a couple underwhelming performances, the Pioneers crushed their competition in Green River, outscoring opponents 42-3 in four games.
Tribune photo by Carson Field
Posted Tuesday, June 29, 2021 8:20 am

Mason Marchant worked six innings of the Pioneers’ 3-1 triumph Sunday morning over Rock Springs, the only real test in Powell’s undefeated showing at the Knight Invitational in Green River. Powell outscored opponents 42-3 in the four games.

Using a “pitching by committee” approach to save pitch count, the Pioneers rolled over Rawlins 10-1 Friday and added big wins over Riverton 15-1 and Bridger Valley 14-0 Saturday. In Friday’s game, Landon Sessions and Ryan Cordes combined for a no-hitter, while Kobe Ostermiller and Brock Johnson “paced the offense” with two hits each.

A couple days prior on Wednesday, June 23, the Pioneers hosted the World Showcase team, which featured players from across the globe. Powell split the doubleheader, dropping the first game 6-5 before taking the next one 10-5.

Though his team was able to pull through for the game two win, Cates called the support from the dugout “silent,” leading to postgame conditioning. His message clearly resonated, as the team won four in a row at the subsequent tournament.

The Pioneers played Lovell in a Monday doubleheader at the south Powell diamond and then are set to host rival Cody in a pair starting at 5 p.m. Thursday. The Pioneers return the doubleheader in a visit to Cody Tuesday, July 6.