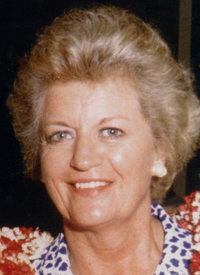 She loved beautiful shoes and flowers, but she cherished her family, good food, BYU football and especially her faith in Jesus Christ and his restored gospel.

Phyllis Jameson Taggart was born Dec. 2, 1928, in Cowley, Wyoming. She passed away early Thursday morning, Feb. 24, 2022, in her Cody home. Born and raised in Cowley, she also called Powell and later Cody home. But Cowley would always be the “pretty little place” she thought of when a Meadowlark sang.

The second oldest of 10 children, Phyllis was one of seven daughters and three sons born to Hyrum Stanley Jameson and Rela Tippets Marchant. She lived the first 10 years of her life in the small family home, in the back of a barber shop, in Cowley, along with as many as five other children. The family later moved a mile from town to a new home just down the road from the cemetery.

Phyllis was salutatorian of her eighth grade class and did well enough in high school to earn a scholarship to Brigham Young University. She claimed she could have done better in high school, but she was too easily “distracted by outside activities,” including band, chorus, triple trio and playing piano for the boys chorus. She also played the part of Cinderella in the high school play.

After two years studying at BYU, she returned to Cowley for the summer to work. That’s when she met Hal Snell Taggart — technically, he kissed her once when she was 12 and, well, Cowley was a very small town. They spent hours together in the Bighorns, fishing in Yellowstone and dancing at the log gym.

Reluctantly — and encouraged by Hal — she returned to BYU for her third year of school. That lasted about three weeks before she used the excuse that her mother was having a baby, so she could return to Cowley and to see Hal, who it turned out was missing her much more than he thought he would. They got engaged, and three weeks later on Nov. 14, 1949, they were married in the Cowley chapel. Six years and two sons later, they were sealed for time and all eternity in the Salt Lake Temple on Sept. 29, 1955.

The marriage produced five children and many wonderful memories, most of them revolving around faith and family. While Phyllis managed the home and cared for their children — Gregory, Jeffrey, Colette, Christopher and Megan — her husband was busy selling life insurance and, for five years, serving as the bishop of the Powell Ward of the Church of Jesus Christ of Latter-day Saints.

Hal suffered a debilitating stroke March 22, 1981, in Powell. For five years, Phyllis cared for him, at first in Powell, then in Cody, in their new home. Hal died Dec. 1, 1985, leaving Phyllis a widow after almost 36 years of a very happy marriage.

As the remaining parent, Phyllis, or Grandma, became the center of gravity of the Taggart family. Her home in Cody was the gathering place for children and grandchildren scattered from Connecticut to California. The Fourth of July, family reunions, Thanksgiving and Christmas were all reasons to return to Grandma’s home.

She didn’t simply sit still in Cody, waiting for family to return, however. She was active in Music Club and in her church. She also served two missions for her church, one 18-month proselyting mission in the North Carolina Raleigh mission, and a 12-month family history mission with her sister Naomi in Salt Lake City. She loved to serve others; her goal seemed always to be an example of Christ-like love.

Phyllis was an avid BYU football and Utah Jazz fan, so much so that she had a cable TV plan that took months to curate in order to maximize her viewing pleasure. She rarely missed a BYU football or basketball game.

And her support for the Jazz? She actually posted on Facebook that “Donovan Mitchell was the best thing to come out of Utah since Brigham Young,” not the school, the prophet.

She was not a couch potato, however. Over the years, she skied, fished and played golf; she even learned to fly. She and her sisters were legends on Foster Gulch Golf Course in Lovell, not because of their low handicaps, but because of their cackling laughter as they chased their golf balls back and forth across the fairways.

Phyllis loved hearing from her family — phone calls were a regular thing in the Taggart household — but she rarely stayed long on the phone. For her, Ma Bell and 60 cents a minute were always a good reason to keep phone calls to less, much less, than six-minutes — even after cellphones and flat-rate calling became the norm.

Grandma’s house was always a warm, safe place to be. Yes, she could correct when necessary, and yes, she had her opinions about what they should or should not do, but anything she said or did was done in love — and her children and grandchildren, even her nieces and nephews knew it. To her family, Phyllis was a peacemaker and a peacekeeper because of her firm faith in the Gospel of Jesus Christ. She preached this gospel through her example. Her family, friends and those who met her understood and felt that.

A viewing will be held Thursday, March 3, from 7 to 8:30 p.m., at the Stake Center of The Church of Jesus Christ of Latter-day Saints, 1407 Heart Mountain Street, Cody, Wyoming. Funeral services at the same location, on Friday, March 4, at 10:30 a.m.

In lieu of flowers, donations can be made to the Northwest College Foundation or to Stillwater Hospice of Northern Wyoming.