A pair of difficult matchups put the Panther volleyball team to the test last week, losing to 4A No. 3-ranked Cody on Thursday 3-0 and winning a tight contest over Buffalo on Saturday 3-2. 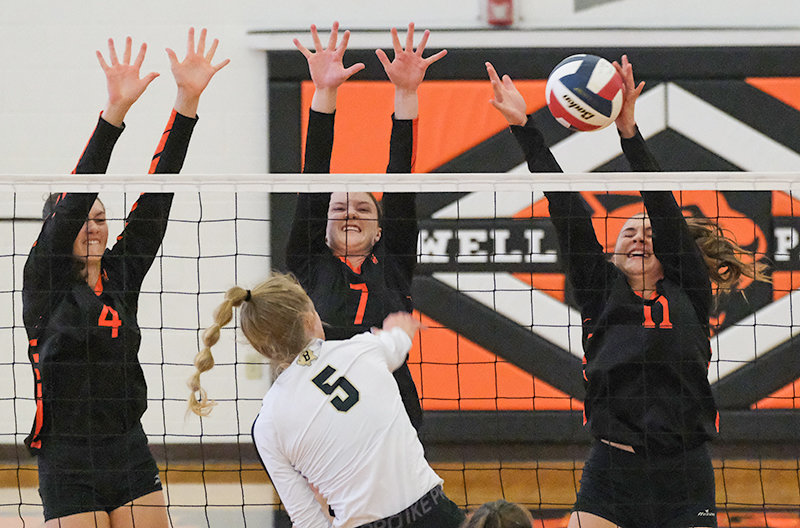 Saige Kidd (left) Waycee Harvey (middle) and Sydney Spomer (right) go up for a block during the Panthers five-set thriller against Buffalo on Saturday.
Tribune photo by Seth Romsa 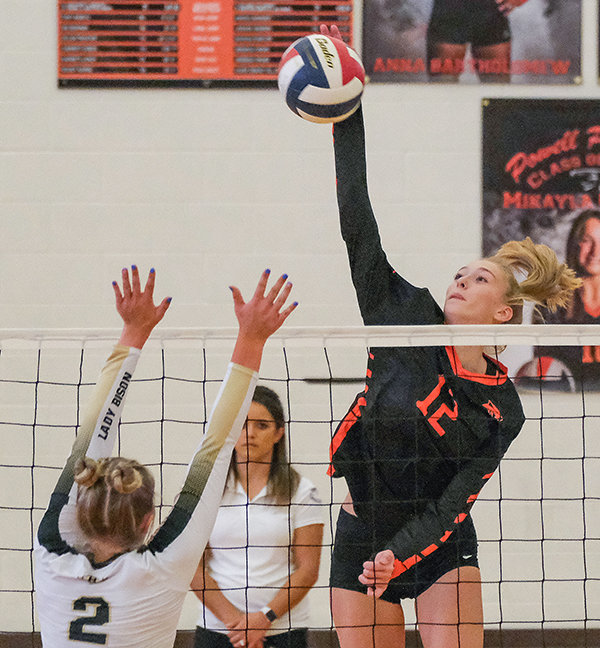 Addy Thorington rises up against Buffalo on Saturday. She finished with a match-high 24 kills in the victory.
Tribune photo by Seth Romsa
Previous Next
Posted Tuesday, September 27, 2022 8:05 am
By Seth Romsa

A pair of difficult matchups put the Panther volleyball team to the test last week, losing to 4A No. 3-ranked Cody on Thursday 3-0 and winning a tight contest over Buffalo on Saturday 3-2.

Making the short trip to Cody on Thursday the Panthers (11-6-1 overall, 2-0 3A Northwest) knew they would have their hands full against their Park County rival Fillies (15-0 overall, 3-0 4A West).

The Panthers came out firing early, putting the hosts on their heels — taking a 7-4 lead and forcing a Cody timeout.

“It was nice to see us compete with them,” coach Lesli Spencer said. “I think there were times where Cody was nervous and did not have an answer for what we were doing.”

Cody answered out of the timeout, taking a 10-9 lead.

Powell remained in the set, trailing 16-14 midway through.

The Fillies were able to pull away, walking away with a 25-19 first set victory.

Powell came into the second set with a close battle ensuing once again down 7-5.

Cody pulled away in the middle of the set, pushing the lead to 18-11 and forcing a timeout by the Panthers.

“Cody made those little runs that we could not take away and stop the bleeding,” Spencer said.

The third set belonged to Cody, jumping out to an early 9-3 lead and forcing a timeout.

After the timeout the hosts continued to push the lead out, making it 17-7 before another timeout.

The Panthers pulled the set back slightly to 18-13, but were unable to make up the early deficit — falling 25-16.

A majority of the stats were even between the two teams, but the Panthers’ struggles in the serve-receive game were their downfall with 17 errors to the Fillies’ four.

Returning home on Saturday the Panthers matched up with another difficult non-conference opponent in Buffalo (12-10-1 overall, 2-1 3A Northeast).

Powell did not come out strong in the first set, with the visitors taking the first six points of the match.

“That is something we have talked about all year is coming out ready to go and not getting ourselves in a hole so we have to dig out of it,” Spencer said.

Not panicking, the Panthers battled back to tie the match 8-8 on a kill by Opps — forcing a timeout by Buffalo.

Powell took the lead out of the timeout on a Thorington ace, but the two teams battled back and forth the rest of the set.

Serving from Buffalo caused problems all day for the Panthers, but in the second set Powell started faster and held a 12-8 lead.

“They have some tough servers who float serve,” Spencer said. “It just dies in the air and drops. They are hard to read in the air, we just need to be quick on our toes and be ready to go get them.”

The Panthers maintained that lead, and pushed it out to 21-15 before a Buffalo timeout.

Another slow start in the third set had Powell trailing 6-1 and calling an early timeout.

Powell started to chip away at the lead, forcing a timeout from Buffalo with the lead trimmed down to one point.

The Panthers tied it out of the timeout on an Opps kill, but the Bison responded with a four point run to make it 18-14.

Powell responded with its own 4-0 run, capped off by a Harvey kill to force another Buffalo timeout.

Buffalo held off the Panther charge, and walked away with a narrow 25-23 victory to take a 2-1 lead.

The Panthers again trailed early in the fourth set, down 11-6 — forcing an early timeout.

Powell came back to tie the set at 12, and later took the lead on an Anna Bartholomew ace to make it 19-18.

A Thorington kill made it 20-18 and forced a timeout.

The Panthers pushed the advantage from there and won the set 25-18 to set up a decisive fifth set.

Buffalo was unable to find its footing, and two key kills from Saige Kidd helped the Panthers run away with the fifth set 15-9.

“Saige is coming on, I think she found her groove towards the end of the Buffalo match,” Spencer said. “She knows how that feels now and she is becoming more aggressive.”

Thorington led the way with 24 kills, Opps had 34 assists and Bartholomew had six aces.

A week full of festivities at Powell High School will include a homecoming match for the Panther volleyball team on Thursday, with a key 3A Northwest matchup against Lovell (9-9-1 overall, 1-1 3A Northwest).