Head to state in Gillette

Staying at home and playing in front of the home crowd proved strong for the Panther tennis teams, with multiple athletes improving their standing over the weekend heading into the state …

Head to state in Gillette 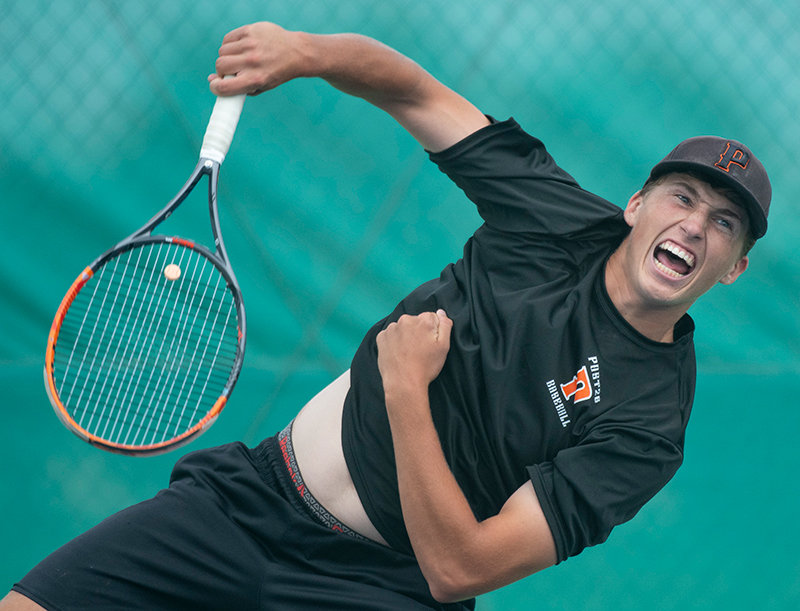 Cade Queen follows through on a serve during his match on Friday. Queen finished in third at the North Regional Tournament.
Tribune photo by Mark Davis 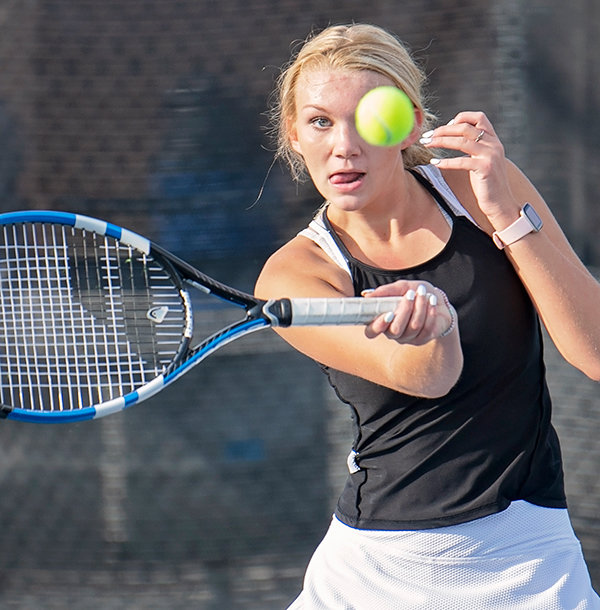 Sydney Hull returns a shot during the No. 1 doubles match on Friday. The Panther tennis teams head to state this weekend in Gillette.
Tribune photo by Carla Wensky
Previous Next
Posted Tuesday, September 20, 2022 8:10 am
By Seth Romsa

Staying at home and playing in front of the home crowd proved strong for the Panther tennis teams, with multiple athletes improving their standing over the weekend heading into the state tournament.

At the No. 1 singles, Cade Queen made a jump by winning the third place match in the regional tournament against Jake Woodrow from Sheridan.

Queen finished with a 3-1 record on the weekend, with the only loss being to eventual champion Campbell Gervais in the semifinals.

“I love playing in front of my friends and family and in Powell too,” Queen said. “Competing is one of my favorite things in the world.”

He said that a lot of practice over the summer allowed him to make the jump from No. 2 doubles to No. 1 singles this year and the results are starting to show.

Queen said throughout the weekend he got more used to the tournament format, and is looking forward to competing for a top finish at the state tournament.

At No. 2 singles, Nathan Preator made a jump by making a run to the third place game on Saturday.

Preator finished with a 2-1 record, with his final match being rained out and dropping to the fourth seed due to regular season head to head against Kelly Walsh’s Isaak Mamot. Preator’s only loss on the weekend came in three sets to eventual champion Hayden Clark.

In doubles, No. 1 competitors Kalin and Keegan Hicswa battled and finished with a 1-2 record on the weekend.

No. 2 doubles had Isaac Stensing and Seeger Wormald battling in a difficult competition, finishing with an 0-2 record.

No. 3 doubles saw a jump from their regular season record, where Ryan Barrus and Taeson Schultz finished with a 2-1 record, advancing to the semifinals and third place game but finishing in fourth after being rained out.

“They made a fun run and were in position to move up to the third spot,” coach Joe Asay said. “Coming away with fourth is an improvement, they did a great job this weekend competing well.”

For the girls, No. 1 singles Chase Anderson finished with a 1-2 record on the weekend.

“In the No. 1 singles it was a challenge,” Asay said. “She battled really well against the girl from Sheridan, but came up a little short in a really solid game.”

In No. 2 singles, Lachelle Lee finished with a 1-2 record.

The duo of Alli Harp and Sydney Hull finished with a 1-2 record in No. 1 doubles.

“They had the opportunity to finish in third place but the fourth spot is a good finish for them,” Asay said.

Maya Landwehr and Lucy Whipple competed for the Panthers at No. 3 doubles, but fell short in the consolation rounds in a three set match to finish 0-2.

The girls finished seventh overall as a team, but were just six points behind fourth place Natrona County.

Powell now heads into its final weekend of the year, heading to Gillette to take part in the state tournament.

“At all levels they are still looking to add more shots to their selection,” Asay said. “They continue to work on those things and the thing I hope they do when they step out on those courts at state is trying to make the right shot selections.”

He hopes they continue to keep their focus on the game, and understand what is working and what is not during the matches in the final weekend.

The tournament will take place over three days from Thursday to Saturday.