Much has changed since the Wyoming Coaches Association named Joe Asay the boys’ tennis coach of the year. 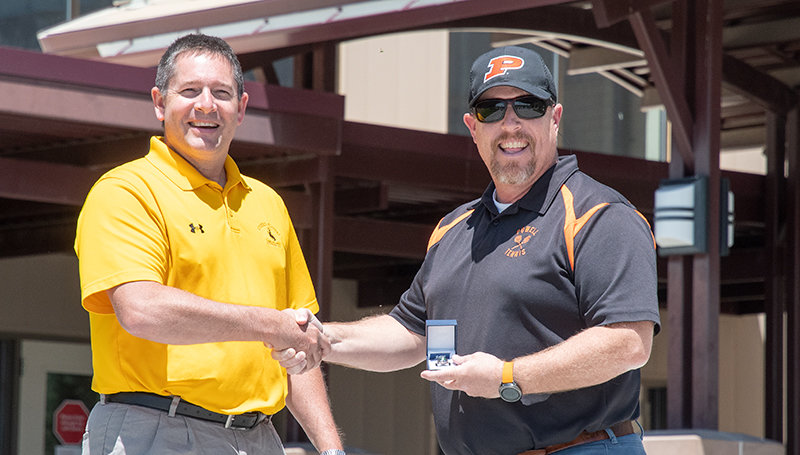 Powell High School tennis coach Joe Asay (at right) receives his award for boys’ tennis coach of the year from Wyoming Coaches Association Past President Mike Lashley. Under Asay’s leadership, Powell won its first-ever boys’ tennis title in 2019. Asay was set to receive the award at a banquet this month, but Lashley hand-delivered it after the event was canceled.
Tribune photo by Carson Field
Posted Tuesday, July 7, 2020 8:20 am
By Carson Field

Much has changed since the Wyoming Coaches Association named Joe Asay the boys’ tennis coach of the year.

After winning Powell High School’s first state championship in program history, Asay was set to be honored at the 2020 Summer Coaches’ Clinic in mid-July. Then COVID-19 struck.

As a result of the global pandemic, the association canceled the 2020 event to avoid putting patrons at risk. But rather than axing the celebration altogether, WCA Past President Mike Lashley came up with an idea: the Banquet Tour.

“We wanted to go around and make it as special as we could with all these coaches,” Lashley said. “It is a special deal to receive a coach of the year honor.”

Lashley spent the week of Monday, June 29 to Friday, July 2 traveling across the state and presenting more than 50 recipients with their coach of the year honors. On Wednesday, he arrived in Powell and delivered the award to Asay in front of some of his athletes.

“… I told him, we just want to let the coaches know that the Coaches Association is thinking about him,” Lashley said.

“It would have been fun to have that recognition [at a banquet], but I looked around and went, ‘Oh, I wouldn’t have had a lot of these bodies probably if we had done it down there,’” he said. “It was really cool to have some of the kids here, so it’s super awesome.”

Championships and accolades are always a goal, but more than that, Asay hopes to once again create a positive atmosphere for his athletes.