A group of Powell High School students recently won a statewide award in a STEM contest for an innovative greenhouse project they’re designing, with the prize valued at $6,500. 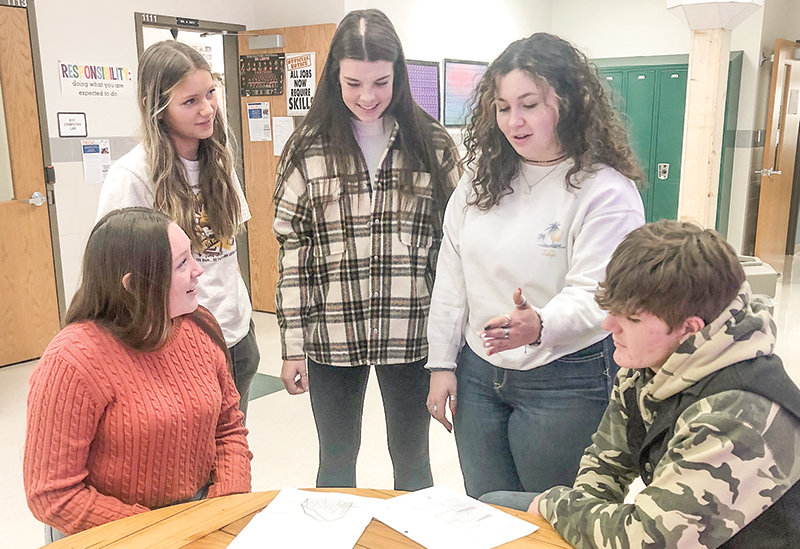 A group of Powell High School students recently won a statewide award in a STEM contest for an innovative greenhouse project they’re designing, with the prize valued at $6,500.

PHS was named one of two state winners for Wyoming in the Samsung Solve for Tomorrow Contest — a nationwide competition for students to creatively use STEM (science, technology, engineering and math) to address problems in their communities.

For their project, a group of students from Wendy Smith’s environmental science classes chose an issue very familiar to Wyomingites: freezing temperatures.

“Our problem is that we have a very short growing season,” said Lilly Morrison, a PHS junior who is involved in the project.

Since cold weather makes it impossible to grow plants for much of the year in the Powell Valley, the students proposed building a greenhouse to extend the growing season.

“With this, we should be able to grow stuff in the greenhouse year round, which means we could plant in December and be growing in January and February,” said Stetson Davis, a PHS junior. “... it can stay a nice ambient temperature in the greenhouse.”

While students haven’t decided exactly what they’ll plant in the greenhouse, Davis said they’d like to grow produce that they can easily distribute to people in the community, as a way to give back.

“With growing it year round, we could help people who maybe don’t have that much food during the holidays and in the colder seasons,” Morrison added.

Students proposed using recycled materials to build the structure, such as metal sheeting, windows and plastic tubing. They also plan to engineer a circulating water system between a compost pile and tubing on the greenhouse’s floor to maintain the right growing temperatures.

“The compost is the way they’re going to heat the water to go under the ground into the greenhouse,” Smith said.

The warm water will also help keep the greenhouse warm, she said.

“We’re also going to have solar panels on it to generate all the electricity that they’re going to need and the motors to run the pump for the water, and maybe a heat source,” Smith said.

While this winter hasn’t been too bad, “we’ve got to think of how we’re going to keep the greenhouse warm when it’s 20 below,” she said.

“We want to make it so that we’re not using any fossil fuels,” Smith said.

Samsung announced the PHS award in a letter to the teacher last month.

“As an educator, you’ve experienced a unique set of challenges within the past year, and we thank you for your effort, commitment to STEM learning and inspiring perseverance,” the Samsung Solve for Tomorrow Team wrote to Smith. “...Our judges read the best quality applications, and yours stood out as one of the exceptional ones.”

PHS students now have the opportunity to advance to the next level of the contest, and they must record a video next month to showcase their project. Samsung is providing a video kit, in addition to the $6,500 that can be redeemed on Donorschoose.org.

With the PHS project getting a big boost with the Samsung award, students are now getting to work and figuring out how to bring their ideas to fruition.

“There’s going to be a lot of research for these guys,” Smith said.

They’ll also be figuring out specifics of the project, such as the dimensions of the greenhouse and where it will be located.

“We’re still in the design phase,” Davis said. “We plan on getting them printed off by the CAD kids and having them design it perfectly with computers … that’d be a big help.”

Working on the greenhouse project wasn’t a class requirement, Smith said — rather, students volunteered to get involved, starting with writing the grant paper.

All of the students are juniors, so if they advance in the contest, they will be able to see the project through next year, Smith said.

Across the country, 100 state winners — two from each state — were selected from a pool of over 1,000 applicants. The other Wyoming state winner was Newcastle High School. Students there are seeking to develop a radon mitigation system that would be more environmentally friendly and cost effective than existing technologies.

“Joining the ranks of the 100 state winners is an incredible accomplishment, and we look forward to following along with you as you embark on this next phase of the program,” Samsung Solve for Tomorrow organizers wrote.

State winners will compete to be named a national finalist, with an award valued at $50,000. Three schools will ultimately be chosen as national winners, receiving $100,000 in classroom technology and supplies.