PHS gym cleared to host up to 700 spectators

Up to 700 fans will be allowed into the Panther Gym for volleyball games this fall, though they’ll be required to either sit apart or wear face coverings.

On Tuesday — just in time for …

PHS gym cleared to host up to 700 spectators 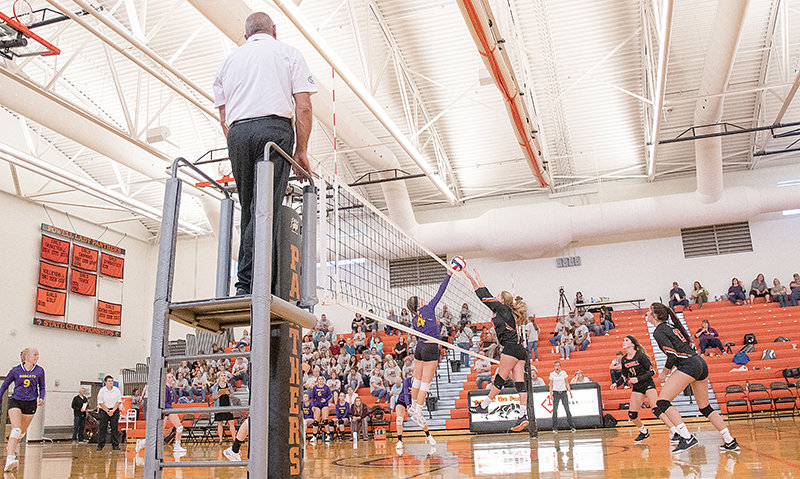 Up to 700 spectators will be allowed into the Panther Gym for tonight’s (Thursday’s) Powell High School volleyball game against Cody, though COVID-19-related precautions will lead to the stands looking different than they did during this 2019 match against Thermopolis. Social distancing and/or facial coverings will be required.
Tribune file photo by Don Cogger 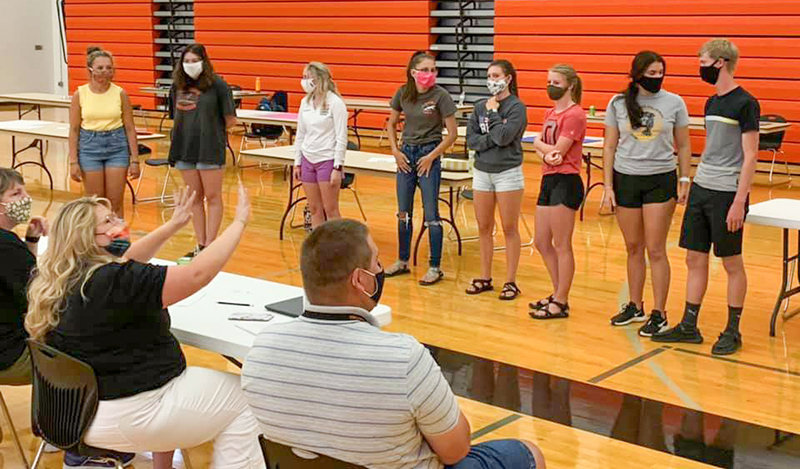 Members of Powell High School’s Ignition mentoring group work with school staff to plan welcoming activities for incoming freshmen in the Panther Gym on Aug. 12. Up to 700 spectators are being allowed into the gym this fall.
Photo courtesy Powell High School
Previous Next
Posted Thursday, September 3, 2020 8:15 am
By CJ Baker

Up to 700 fans will be allowed into the Panther Gym for volleyball games this fall, though they’ll be required to either sit apart or wear face coverings.

On Tuesday — just in time for this (Thursday) evening’s volleyball match against Cody — State Health Officer Dr. Alexia Harrist approved an exception request that will allow Powell High School to exceed the state’s current 250-person cap on indoor events. The exception allows the Panther Gym to be filled to 35% capacity.

Powell and Cody high school activities directors Scott McKenzie and Tony Hult had jointly submitted the exception request last week, as it also clears the way for up to 680 people (32% capacity) to gather at the CHS gym.

“While we are most appreciative that Governor [Mark] Gordon and Dr. Harrist have eased concerns over public gatherings outdoors [where up to 1,000 attendees are allowed], we are certain that we can increase numbers and hold indoor events that are safe and will not contribute to the spread of the COVID-19 virus,” McKenzie and Hult wrote in asking to exceed the state’s 250-person cap.

Both gyms can hold more than 2,000 spectators under normal conditions. In coming up with their requests for 700 and 680 people, PHS and CHS officials calculated how many people could be seated with 6 feet of space between them.

Between those calculations and guidelines from the Wyoming High School Activities Association, McKenzie and Hult said they felt “confident” in their Aug. 27 request. They said announcers would remind spectators of the social distancing protocols and expectations, while “signs will [be] posted at every entrance to the facilities, checking for symptoms, encouraging mask usage and emphasizing sanitation procedures.”

Park County Health Officer Dr. Aaron Billin approved the plan the following day, but with one change, as he didn’t feel that encouraging spectators to wear a mask went far enough.

“All spectators shall wear a face covering unless they are seated and socially distance 6 feet from other family groups,” Billin wrote in his approval.

Dr. Harrist — who has the final say on all exception requests — agreed on Tuesday.

“... Face coverings are required for all spectators when 6 feet of distancing from other groups/households can’t be maintained,” Harrist wrote, underlining the word “required” later in the document.

Additionally, all of the state’s other requirements on indoor gatherings of more than 50 people still apply, she noted. Those rules include generally limiting attendees to sit in groups of no more than six people, unless they all live in the same household; prohibiting close contact between members of different households; screening athletes for symptoms of and exposure to COVID-19; thoroughly cleaning the gym; having event staff wear appropriate protective equipment; and practicing common sense disease prevention measures, like covering coughs and sneezes.

The current rules — which are in addition to precautions crafted by the WHSAA — have been in place since mid-July and were recently extended through at least Sept. 15 by Gordon and Harrist.

At an Aug. 25 school board meeting, Park County School District No. 1 Superintendent Jay Curtis had predicted that the district might only be cleared to have 350 or 400 spectators. As it turned out, the full 700-person request was granted, but the district has also made arrangements so that Panther fans won’t have to show up in person to track the action.

“The more people that come in person, the greater the chance that we’re going to ask you to wear your mask,” especially indoors, McKenzie said Wednesday. He asked people to bring a mask to Panther events “just in case.”