Exciting memories and one final victory at home sent the seniors of the Panther girls’ soccer team off in style as Powell tied with Lyman 1-1 on Thursday and defeated No. 4 ranked Mountain View … 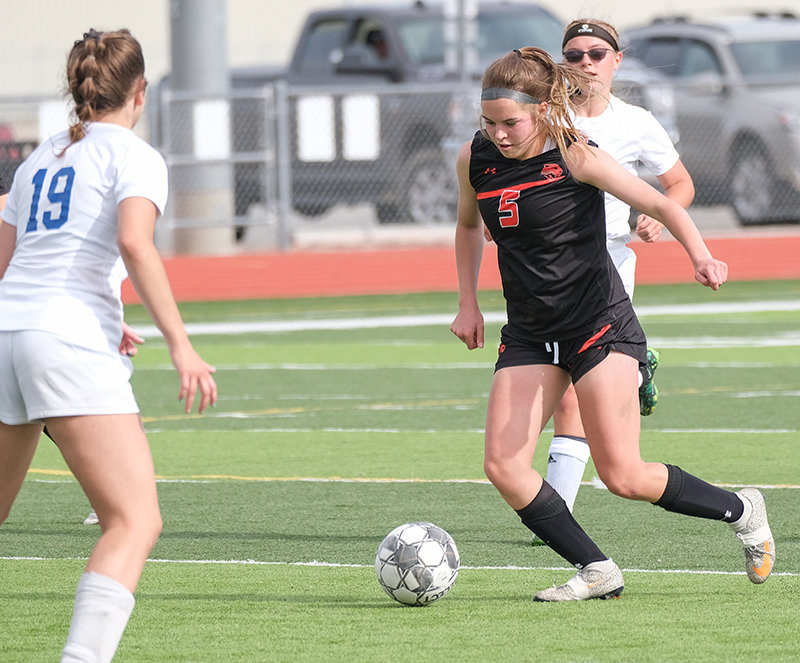 PHS sophomore Aubree Fisher (right) helped lead an improved attack on Thursday and Friday as the Panthers tied with Lyman 1-1 and defeated No. 4 ranked Mountain View 1-0. The Panther girls season comes to a close as they face Worland on the road Thursday at 4 p.m.
Tribune photo by Seth Romsa
Posted Tuesday, May 10, 2022 8:25 am
By Seth Romsa

Exciting memories and one final victory at home sent the seniors of the Panther girls’ soccer team off in style as Powell tied with Lyman 1-1 on Thursday and defeated No. 4 ranked Mountain View on Friday 1-0.

The game did not start strong for the Panthers.

Lyman got on the board first, after a long throw-in took a high bounce over the Panther defense and found its way to a streaking Eagle attacker.

She put it far post past Panther goalkeeper Taylor SanFilippo and gave the visitors a 1-0 lead just six minutes in.

The Panthers did not lie down.

Just a minute later, junior Jordyn Dearcorn sent a through ball past the defense and found freshman Emily Orr up the left wing.

Orr scored from a tight angle and tied the contest 1-1 with her second goal of the season.

Both teams continued a back and forth battle throughout the rest of the first half, but neither team found a finish to take the lead.

Early in the second half the Panthers found better opportunities attacking, but were unable to find the back of the net.

Just over 11 minutes into the second half, the Panthers had their chance to take the lead.

A handling in the penalty area by a Lyman player gave Powell a penalty kick.

Senior Kabrie Cannon stepped up to the spot, and shot the ball hard to her left.

The ball got air underneath it, and hit the crossbar.

After it hit the crossbar it bounced back to Cannon, who was called for an illegal second touch as the goalkeeper did not touch the ball — awarding a free kick to the Eagles.

Both teams had opportunities down the stretch, but the best chance came from Lyman as they put one past the post with minutes left to play.

Heading into overtime both teams had attacking opportunities, but neither goalkeeper was tested as the game ended in a draw.

After a tiring draw on Thursday night, the Panthers had a quick turnaround heading into Friday as they welcomed No. 4 ranked Mountain View (6-4 overall, 5-4 3A West) in their regular season home finale.

After a 4-0 loss earlier in the season on the road, Powell constantly changed its line-up of defenders in order to try and stop a fast-paced Mountain View attack. This included moving Orr from her forward position back to a defensive role.

“She [Orr] played an outstanding game,” Panther Girls Head Coach Kaitlin Loeffen said. “Limiting No. 3’s options allowed our defense a break and they did a great job marking the rest of the offensive attack.”

The Panther defense held the Buffalos from taking any serious attempts on goal, as they continually forced Mountain View into taking long shots that SanFilippo saved with ease.

After a scoreless first half, Powell settled into the game on the attack.

Against the run of play, the Panthers got the winning goal.

After six minutes of strong defense, freshman Kenna Cannon took space in the middle of the field and found a through ball to sophomore Aubree Fisher up the left side.

Fisher’s left-footed cross turned into a shot and hit the crossbar.

Sophomore Kenzie Fields was in the right place at the right time.

The ball bounced back down to Fields, who headed the ball back into an empty net to give the Panthers the 1-0 lead.

After that goal, Powell continued to be on the front foot for a majority of the second half as they started stringing together opportunities.

The Panthers continued to hold strong on the defensive end, as the back line continued to fluster the Mountain View attack.

Powell and Mountain View were both unable to take advantage of opportunities at the attacking end of the field, and the Panthers walked away with the 1-0 victory.

“It was a great weekend for Panther soccer all around,” Loeffen said. “I am beyond proud of my girls for gutting out 180 minutes of soccer this weekend with the overtime game Thursday and a tough match Friday.”

Despite the undefeated weekend, the Panthers were eliminated from postseason contention over the weekend.

A victory by Worland (7-5 overall, 5-5 3A West) on Saturday in Pinedale put them at 15 points, just out of reach of the Panthers, who sit in fifth with 10 points.

“We know the end is in sight, but competitive players do not stop working until the last whistle blows,” Loeffen said. “I hope we show our best team Thursday and can finish the season on a high note.”

The Panthers head on the road to take on the Warriors on Thursday at 4 p.m.