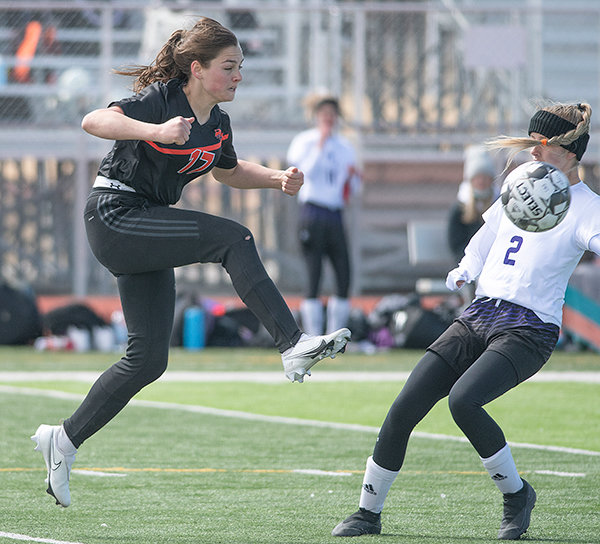 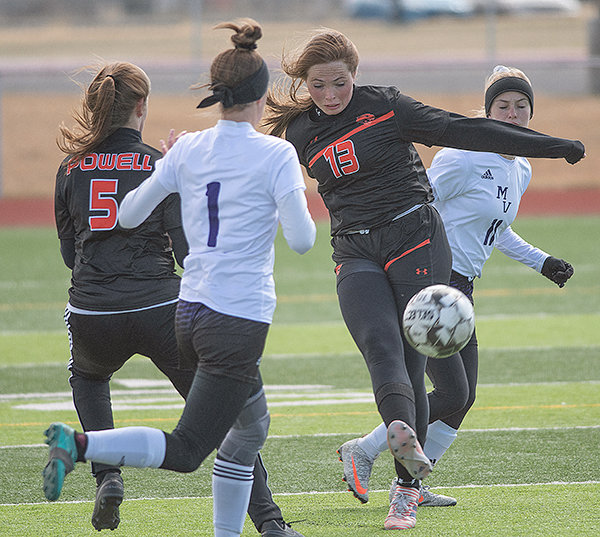 Paije Johnson goes for a ball Friday against Mountain View. Before facing Lander Valley and Pinedale this weekend, the Panthers will focus on taking advantage of offensive chances.
Tribune photo by Carson Field
Previous Next
Posted Tuesday, April 20, 2021 8:05 am
By Carson Field

Powell High School girls’ soccer dropped two more games last weekend, falling to Mountain View and Lyman on Friday and Saturday. The Panthers dropped the first match of the weekend 3-0 against the Buffalos and lost 1-0 to the Eagles the next day.

While they couldn’t come away with a win, the Panthers competed better than they have all season.

Against Mountain View, the Panthers surrendered just two goals in the first half, despite playing against the wind. PHS head coach Kaitlin Loeffen noticed improvement from her defense’s back line.

“Wyoming weather always brings an interesting element to the game, and I felt our defensive line adjusted well,” Loeffen said. “They judged long balls and played many runs out the end line knowing Mountain View’s offense would not get to them. Their communication was key to limiting offensive opportunities; I am very proud of their hard work.”

In both matches, the Panthers logged shots on goal and kept the scorelines closer than most other contests this year. PHS scored a goal in the Lyman game, but it was called back due to offsides.

“Offensively the ladies are starting to click and gain confidence in themselves,” Loeffen said. “I think they are seeing their hard work pay off and the importance of first touch and combinations.”

The coach was proud of her team’s tenacity in the narrow loss to the Eagles.

“Our team put together their best performance yet against Lyman,” Loeffen said. “As devastating as a close loss can be, I can’t express how proud I was of our ladies’ effort. They played an entire 80 minutes and fought for nearly every ball.”

With Saturday’s tilt being so close, Loeffen thinks it could grow her squad’s competitive spirit.

“The experience is invaluable,” she said. “We win as a team; we lose as a team. We will keep fighting, as we know we truly only lose if we give up. The ladies had a taste for victory and with half the season left they are ready to show their improvement.”

While Loeffen said there were several girls who stood out against Mountain View and Lyman, the coach singled out Mary Shopa, who played her first varsity match on Saturday.

“Her effort is relentless, and her speed is something we very much need,” Loeffen said. “I am excited to see her ball skills improve.”

With the loss, Powell is now 0-8 overall this year. The Panthers next take the pitch at 3 p.m. Friday, when they face Lander Valley on the road, followed by a home test against Pinedale the next day.

Throughout this week, Loeffen said, “we will continue working on finishing and capitalizing on every opportunity we get in front of the net.”