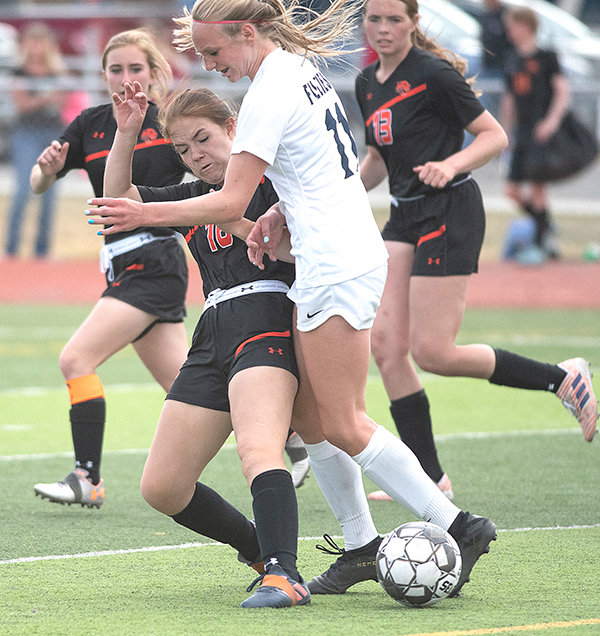 PHS sophomore Madelyn Hedges attempts a tackle in Powell’s Thursday loss to Cody. The Panthers hope to build on their recent improvement as they wrap up the regular season, facing Mountain View and Lyman on the road this week.
Tribune photo by Carson Field 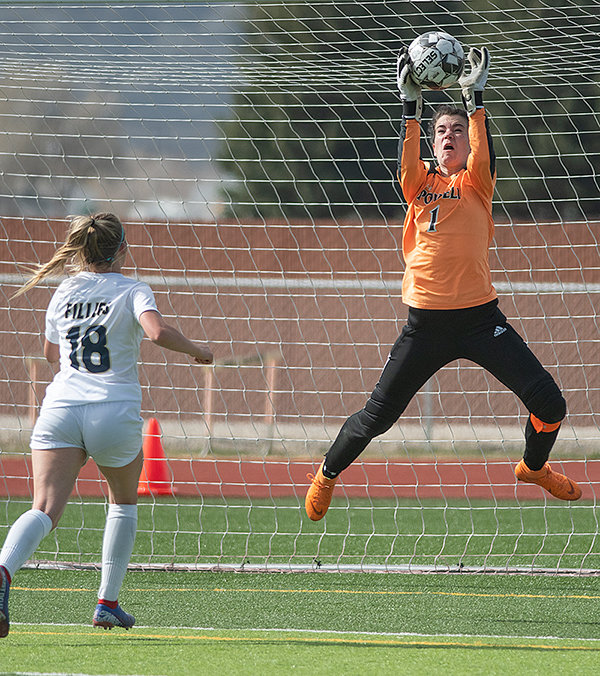 Mattie Larsen makes a save Thursday in Powell’s 7-0 loss to Cody. Larsen played both in goal and in the field in the senior night match.
Tribune photo by Carson Field
Previous Next
Posted Tuesday, May 4, 2021 8:05 am
By Carson Field

While PHS wasn’t able to earn its first win of 2021, falling 7-0 against Cody, the team showed growth from its first meeting against Cody.

In her first year coaching the squad, Kaitlin Loeffen stressed the impact this group has had.

“The senior class has shown time and time again their resilience and will to never give up,” the coach said. “This season has likely not played out like they had hoped, but they continue to show up, lead by example, and put in maximum effort during practice and games regardless of the outcome.”

Thursday was one goal closer than Powell’s first meeting with Cody, but more than that, the overall play was better. The Panthers played better defensively, made more runs in the midfield and logged more shots than the first time.

“It’s easy to compare scores from one’s first meeting and their second, but I saw much more than that,” Loeffen said.

Larsen, the Panthers’ starting goalkeeper, asked to play in the field for the second half and Loeffen fulfilled this request. It was an opportunity for Larsen to play minutes in a new area while giving experience to her backup, sophomore Taylor SanFilippo.

“As it was senior night, I felt it was the right time to pull her and give her that opportunity,” Loeffen said. “Her smile and hustle spoke volumes and I was happy we made that choice.

“This also gave us a glance at what to expect next year,” the coach added. “While she has big shoes to fill, Taylor [SanFilippo] will rise to the occasion and I am very happy to see her excel in the goal.”

Loeffen singled out the five seniors who played — Asher is out for the remainder of the season due to a leg injury — as standouts in the loss.

“Each of them has been monumental in establishing a new culture in the program,” she said of the group, “and I am forever thankful they have ridden out this first-year coaching journey with me.”

With the home slate now behind them, the Panthers — now 0-10-1 — have three regular-season games remaining on the road. They face Mountain View at 4 p.m. Friday and Lyman at 10 a.m. Saturday.

Powell played both Mountain View and Lyman close in their first meetings, and Loeffen said the team could see its first win if it executes in every area.

“The game plan hasn’t changed; we need to find the back of the net,” Loeffen said. “This week we will focus on making runs and finishing quickly. We will be sure to work out any kinks in the back line, as the team that limits goals and scores once or twice will be the team that comes out on top. We are hungry for our first win!”