Throughout the 2021 season, the Powell High School girls’ soccer team has shown steady improvement, and Saturday was the pinnacle of its growth.

The Panthers earned a 0-0 draw against … 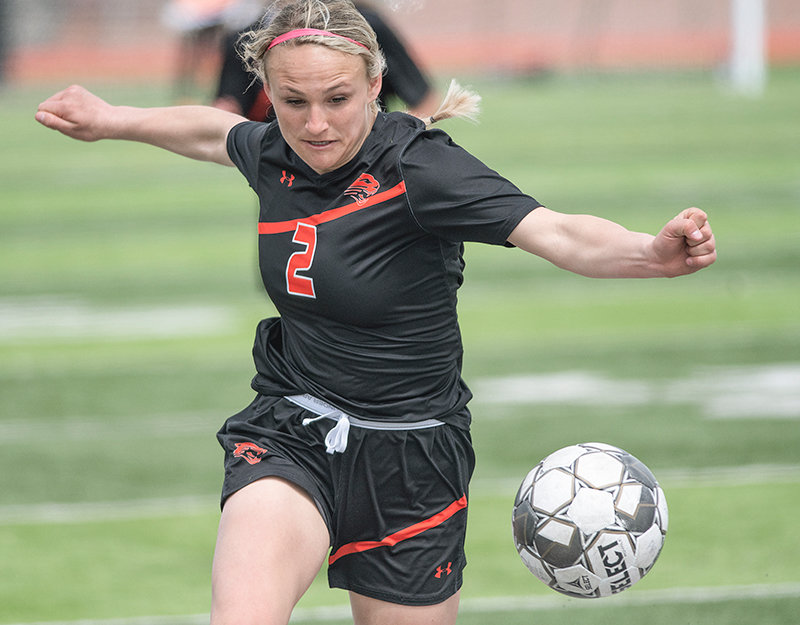 Sidney Karst tries to stop a ball Saturday in Powell’s game versus Pinedale. The Panthers earned a draw in what coach Kaitlin Loeffen described as the team’s best outing of the season.
Tribune photo by Carson Field 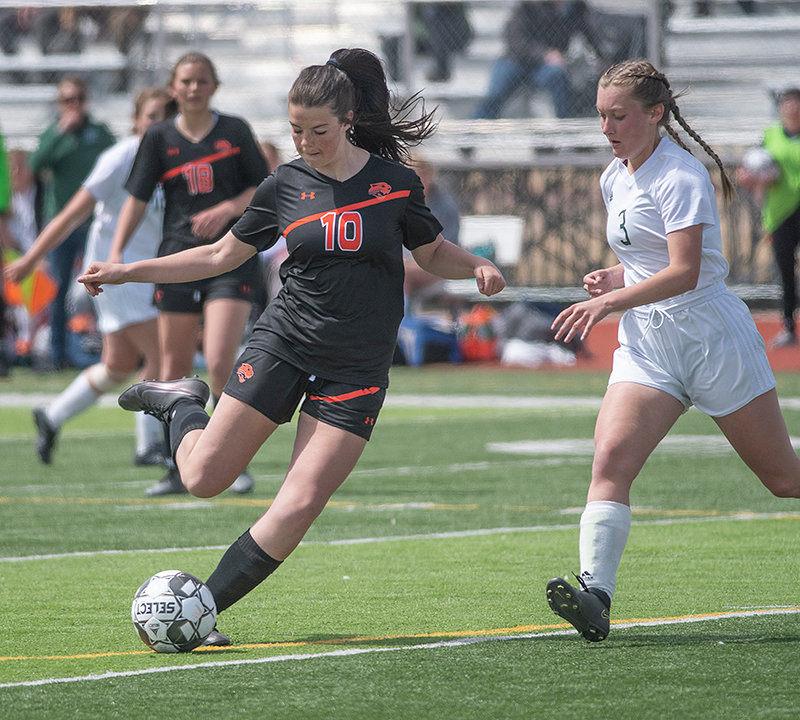 Gracie Trotter passes downfield Saturday against Pinedale. Though the match ended in a 0-0 draw, PHS logged 16 shots on goal.
Tribune photo by Carson Field
Previous Next
Posted Tuesday, April 27, 2021 8:05 am
By Carson Field

Throughout the 2021 season, the Powell High School girls’ soccer team has shown steady improvement, and Saturday was the pinnacle of its growth.

The Panthers earned a 0-0 draw against Pinedale Saturday, a day after falling 7-0 to Lander Valley. They are now 0-9-1 overall.

Though they couldn’t find the back of the net, PHS recorded 16 shots in the tie. They controlled the possession for the majority of the second half, stemming from strong communication.

“The girls trusted each other and each one of them put in maximum effort while they were on the field,” coach Kaitlin Loeffen said. “They were first to most balls, had better first touches, and looked up to play the ball to each other, resulting in numerous successful runs.”

Aubree Fisher had the most shots on the team with five, while Sidney Karst, Sarah Hampton and Kenzie Fields also had multiple shots. Because of the Panthers’ stellar defense, Pinedale had very few offensive opportunities, leading to a low number of saves for goalkeeper Mattie Larsen.

This impressive outing came just a day after Powell’s match against Lander. While Loeffen admitted it was somewhat disappointing to not earn a win, she noted it as the team’s best performance of the season.

“I couldn’t have been more proud of their effort!” the coach said. “Some gals played 100 minutes and never gave in. While others didn’t see as much time on the turf, they showed excellent grit and determination when they were out there.

“Playing a team to a tie is just about as close to a win as one can get, and I felt the contest on Saturday was truly a win for our program,” she said.

And while Friday’s loss to the Tigers was lopsided, it was a better performance than Powell’s first contest with Lander, when it fell 9-0. Unlike the first match against LVHS, PHS saw a few offensive chances, resulting in four shots.

“I was very impressed with our ladies’ effort against a tough, well-coached Lander squad,” Loeffen said. “While the overall score was still very lopsided, we did play them closer than we did in the first contest. I expected the ladies to play a different formation then we have this season and they rose to the occasion and kept pressing.”

Loeffen has seen improvement in the team’s cohesion, while she said the girls still need to get better at defending give-and-go’s.

This week, PHS hosts Cody for senior night at 4 p.m. Thursday. The Panthers fell 8-0 to the Broncs last month but have steadily improved since then.

As the Panthers continue to grow as a team, Loeffen hopes to see the girls remained focused.

“From the beginning I have told the ladies they will need to trust the process and I think the underclassmen are starting to buy in. Every practice and every game gives them an opportunity to improve,” the coach said. “I am hoping they will invest in the program during the offseason to continue moving forward.”