A long road trip across the state to Afton led to a second straight loss for the Panther football team, as they dropped Friday’s road contest to the Star Valley Braves, 29-13. 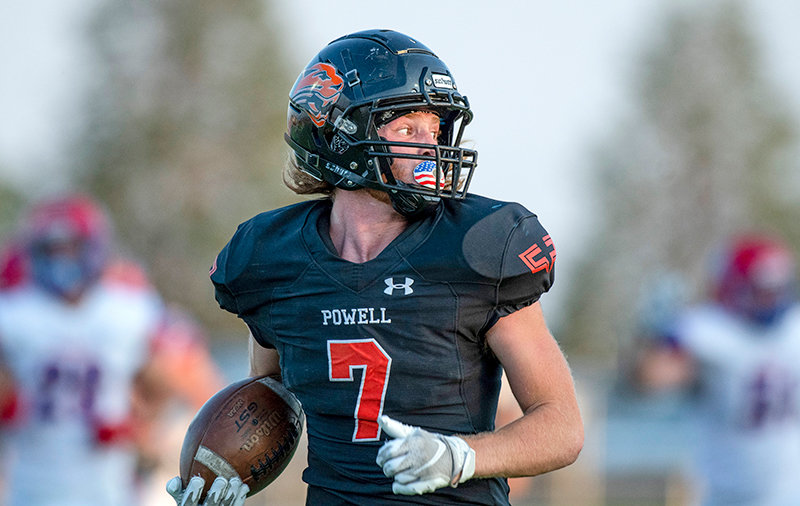 Powell’s Sam Whitlock returns an interception for a touchdown against Douglas last month. Whitlock returned a kick off for a 99-yard touchdown in the Panther’s loss on the road to Star Valley in Afton Friday.
Tribune photo by Mark Davis
Posted Tuesday, October 5, 2021 8:20 am
By Seth Romsa

A long road trip across the state to Afton led to a second straight loss for the Panther football team, as they dropped Friday’s road contest to the Star Valley Braves, 29-13.

The Panthers (4-2 overall, 0-2 3A West) went into the game missing three of their starting offensive and defensive linemen, as Karson Lamb was sidelined for the second straight week, along with Lane Shramek and Sheldon Shoopman.

With those starters out against the Braves (3-3 overall, 1-1 3A West), coach Chase Kistler decided to start younger players on both sides of the ball; some of the Panthers’ linemen were outweighed by the Braves by nearly 100 pounds.

“Their size up front gave us some issues,” Kistler said.

Along with the three linemen out due to injury, the Panthers were without wide receiver/defensive back/kicker Hawkin Sweeney due to COVID-19 protocol, but Kistler said he’s expected back early in the week.

With all of the changes on defense, Kistler said they decided to change from their base defense, which the youth of the team handled well.

He said Star Valley came with a mix of running and throwing as Braves quarterback Taft McClure threw for 237 yards and three touchdowns, and Winston Green added 180 total yards and a rushing touchdown.

With a young line, Kistler also decided to go to the air more often, and he said sophomore quarterback Jhett Schwahn played well in a pass-centric offense.

The two scores for the Panthers came on a 99-yard kickoff return for a touchdown by Sam Whitlock along with a rushing score from senior Toran Graham.

The Panthers were led on both sides of the ball by Graham.

“Toran was all over the field again,” Kistler said.

After the game, the coach said he felt both the youth and the whole team handled the road trip well and even had a chance to come back at the end of the game before running out of time.

“Star Valley is one of the top teams in the state for sure,” Kistler said.

The coach said he is hopeful that all of the injured lineman along with those out with illnesses will be at full strength by Wednesday, but he does not plan to push their limits this week in practice.

This week Kistler plans to get back to fundamentals and continue to develop the youth of the team to improve depth.

The Panthers return home this Friday at 6 p.m. to take on Green River (0-5 overall, 0-2 3A West), looking to earn their first conference victory.

The Panthers are hoping to get back on track and continue their march toward the 3A playoffs in three weeks.