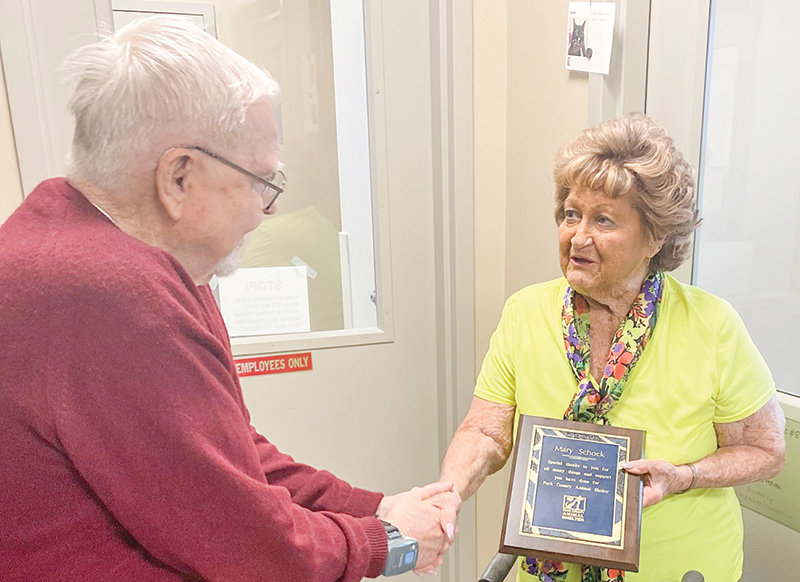 Park County Animal Shelter’s board of directors presented longtime shelter supporter and former board member Mary Schock with an award to celebrate her many years of dedication and service to rescuing animals in Cody and surrounding areas.

Schock was a founding member of the organization and has been involved since the Park County Animal Shelter (PCAS) was established in 1990.

“We had a lot of ups and downs over the years,” said Schock. “I remember times when we weren’t sure we would make it through. But we always found a way.”

Between 1990 and 1996 (the year that PCAS became a no-kill shelter), Schock and many others involved in the early years had a difficult time securing enough funding for a brick-and-mortar shelter. They relied on volunteers to foster animals while they worked on rehoming or reuniting them with their families.

In 1996, PCAS began renting space out of a local veterinary clinic on the Meeteetse Highway (Wyo. 120), which served as the organization’s first shelter. Schock kept it running before the group was able to hire paid staff, and stayed on as a volunteer to help with daily cleaning and scheduling for many years. Schock also served as a board member until June 2018.

Schock and Gerry Patterson were well known in the community for checking on animals after they’d been adopted, and for providing food and water to pets in the community who were being neglected.

“This one time, no one was home but these two dogs just started following us back to the car. They jumped right in and looked at us like ‘you’re not leaving without us, are you?’ So we took them back to town and stopped by Dr. [Malcolm] Blessings’ place and he said, ‘You just stole those dogs, Mary!’” Schock laughed, reflecting on some of her most memorable rescue moments. “That’s how we became known as the two old ladies in the Toyota Camry.”

Having grown up on a farm in Powell, Schock has committed much of her life to raising and caring for animals. When asked why she’s supported PCAS for so long, Schock’s reason is simple: “For me, it was always about my love for animals. It always comes down to that.”