The Powell Panthers continued their undefeated campaign, holding the Douglas Bearcats to 141 yards of total offense during a Homecoming win on Friday.

The game began back and forth with penalties … 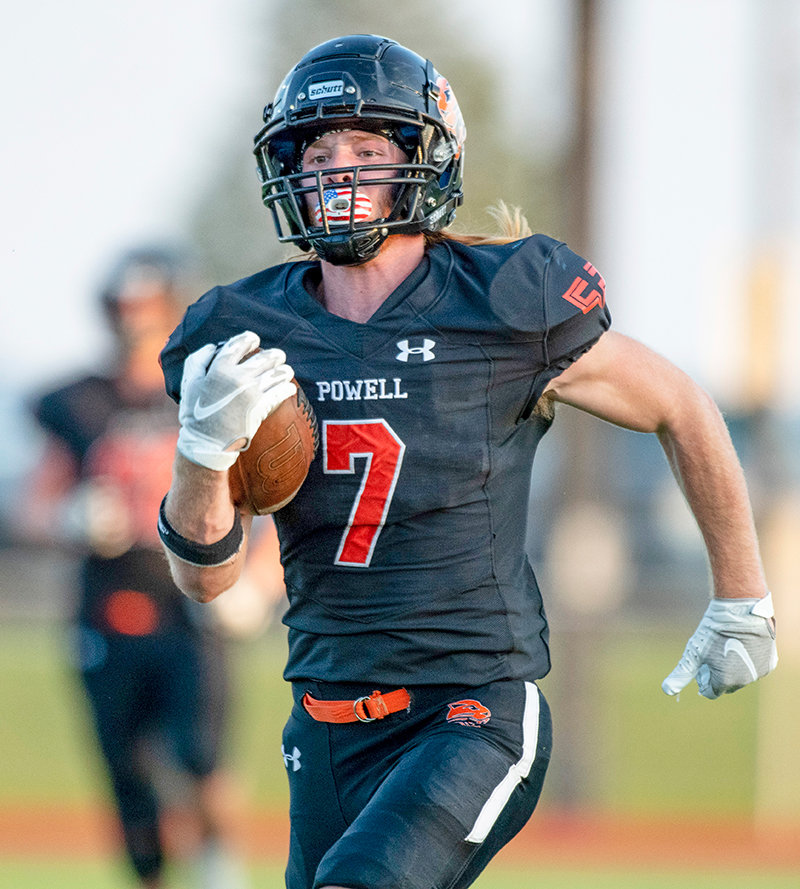 Panther tight end Sam Whitlock strides into the end zone for a 69-yard touchdown on Friday night. The score late in the second quarter put the Panthers up 14-0 over the visiting Douglas Bearcats.
Tribune photo by Mark Davis
Posted Tuesday, September 21, 2021 8:25 am
By Seth Romsa

The Powell Panthers continued their undefeated campaign, holding the Douglas Bearcats to 141 yards of total offense during a Homecoming win on Friday.

The game began back and forth with penalties and stalled drives by both the Panthers (4-0) and the Bearcats (2-1), but it was broken open by a 42-yard interception return for a touchdown by PHS senior cornerback Zach Ratcliff in the second quarter. That helped the Panthers defeat the Bearcats 17-0.

“I was impressed with our secondary, they really stepped up,” coach Chase Kistler said.

Entering Friday night, the Panthers had forced seven turnovers during their previous two games against Worland and Lander.

From the outset of the Homecoming match-up of two unbeatens, both teams struggled to get their feet under them.

The Panthers took their first drive 48 yards and were stopped on a fourth-and-3 play from the Bearcats’ 35-yard line. After a short three-and-out, Powell’s second drive stalled out near midfield before punting back to the Bearcats. The Panther defense then shut down Douglas and, aided with a targeting penalty on the punt return, the Panthers started their third drive at the Bearcat 43-yard line.

“That [Ratcliff’s interception] was huge for the first half, it caused us to get the sideline and crowd back into it,” Kistler said. “It gave us a little bit of breathing room, which led us to believe we can get this rolling now.”

Throughout the season the Panthers have accumulated nearly all of their offense through their rushing game, but a 69-yard touchdown pass from sophomore quarterback Jhett Schwahn to senior tight end Sam Whitlock helped put the Panthers up 14-0 and capture all of the momentum going into halftime.

However, the Panthers took a hit to their defensive line on the first play of the second half when senior Karson Lamb went down with an apparent knee injury.

“We had to shift up a lot of kids that put a freshman and a sophomore on the line of a varsity game against a team that is a rival game,” Kistler said.

Throughout the second half, the Panthers were only able to generate 15 yards of rushing on their 13 attempts. But the PHS defense dug in its heels in the second half and held the Bearcats to only one sustained drive, which ended when the Panthers stopped Douglas on the 11-yard line on fourth-and-6.

The scoring was capped off by a 34-yard field goal by Sweeney with 55 seconds left in the game.

It was the first time that the Bearcats had been shut out since October 2017.

The Panthers head into a rivalry game this week, as they open up Class 3A West conference play at undefeated defending state champion Cody (3-0) at 7 p.m. Friday.

What are the plans heading into the game against Cody?

“Get healthy and focus on us,” Kistler said. “That has been our thing. It is still really early in the season for us, first conference game; we just gotta continue to get better, get healthy and get guys rolling.”