Facing the No. 1 team in Class 3A, the Powell High School boys’ soccer team controlled the ball for the majority of the contest and got more shots on goal. But that didn’t have an effect … 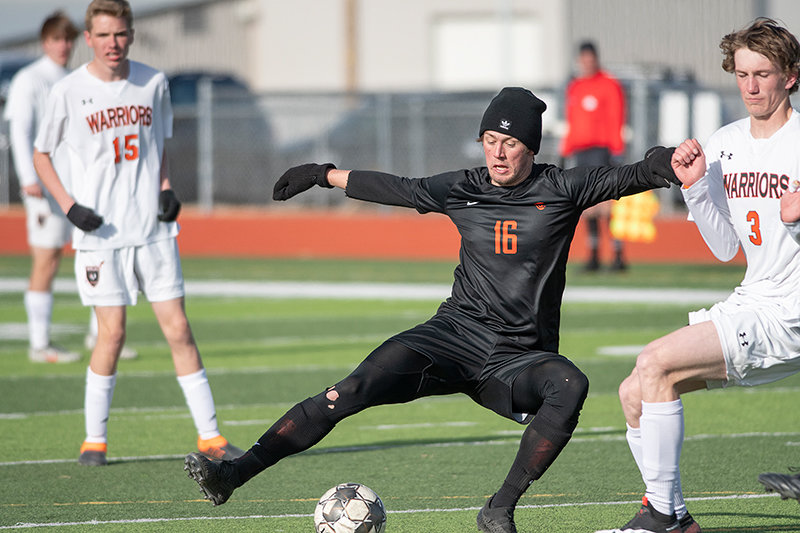 Facing the No. 1 team in Class 3A, the Powell High School boys’ soccer team controlled the ball for the majority of the contest and got more shots on goal. But that didn’t have an effect on the outcome of Tuesday’s home match against Worland.

PHS dropped its first contest of 2021, falling 1-0 to the Warriors in extra time. Worland’s lone score came with two minutes remaining in the first half of extra time, when Cole Venable struck a ball past Ashton Brewer.

“Credit to them,” he said of the Warriors. “They’re a good team.”

Particularly in the first half, Powell controlled the ball. But the Panthers were unable to get many shots, as the Warriors played conservative defense and consistently stymied their opportunities.

“They countered our attack well,” Gilliatt said. “They studied our method of attack and played more conservative defense.”

Other than allowing Venable’s extra-time goal, the Panthers’ back line played exceptionally. That unit — which consists of Reese Bauer, Matthew Hobbs, Landon Sessions and Steven Stambaugh — “worked their butts off,” said Gilliatt.

Overall, the coach was pleased with his team’s performance. Gilliatt said the match could have gone either way, depending on if they had a few more passes, shots or calls that went their way. But from the start of the match to the final whistle, PHS never surrendered its fight.

“I don’t think we got outworked,” Gilliatt said. “We need to keep our intensity and work rate.”

That said, he noted a few areas that could use work. Some of those include becoming slightly more accurate with passing and being more patient in the attack.

“If we make some minor tweaks, that’s potentially a different outcome,” Gilliatt said.

But this isn’t Powell’s only chance at the Warriors. The Panthers — now 3-1 overall — wrap up the regular season in Worland on May 14.

Before then, Gilliatt sees this early season defeat as an opportunity for his team to grow.

The Panthers next play on Friday, April 9, hosting the Lander Tigers.