A fast start saw the Panthers gain all of the momentum in their rivalry game with Cody, but big plays and self-inflicted wounds saw the Broncs run away with a 38-14 victory Friday night. 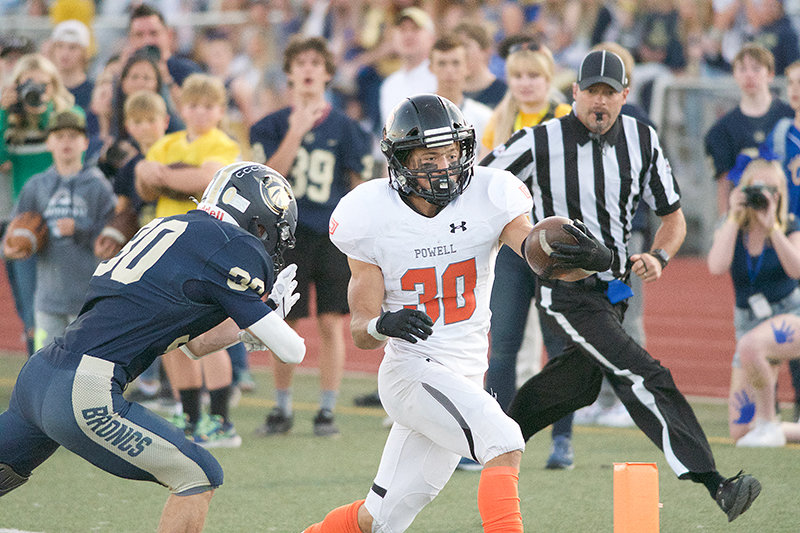 Senior running back Reed Smith reaches over the goal line as the Panthers struck first against Cody Friday night. However, the Powell team ultimately fell 38-14 for its first loss of the season.
Tribune photo by Seth Romsa 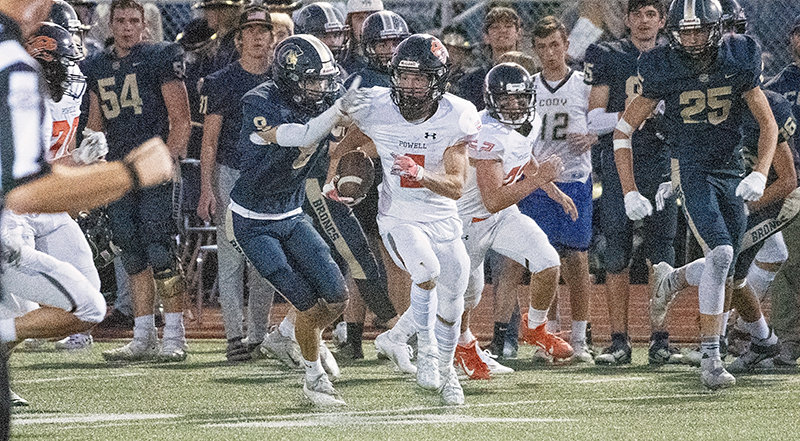 Senior Zach Ratcliff looks to avoid a Bronc defender as he moves upfield after a Friday reception. The Panthers had 74 passing yards in the game.
Tribune photo by Carla Wensky
Previous Next
Posted Tuesday, September 28, 2021 8:20 am
By Seth Romsa

A fast start saw the Panthers gain all of the momentum in their rivalry game with Cody, but big plays and self-inflicted wounds saw the Broncs run away with a 38-14 victory Friday night.

The game opened on a 61-yard rush by Powell High School senior Reed Smith, which put the Panthers (4-1 overall, 0-1 in conference) in the red zone. Smith then finished off the quick scoring drive with an 8-yard touchdown run, followed by a Hawkin Sweeney extra point to make it 7-0 Powell.

After a three-and-out by each team, the Broncs (4-0, 1-0) seized momentum on a 45-yard touchdown pass from Luke Talich to Drew Trotter.

The Panthers blocked the extra point, but then mistakes began to plague the squad in the second quarter.

“We were our own worst enemies,” PHS head coach Chase Kistler said.

The ensuing kickoff saw Powell’s return brought back after an illegal block in the back.

Then after a short drive, a high snap over the punter’s head gave the Broncs the ball inside the 20-yard line.

The Broncs took advantage and scored on a 7-yard run by Jackson Schroeder on the next play. After an unsuccessful two-point try, Cody led 12-7.

Another stalled drive by the Panthers led to a punt.

“We knew what they were going to throw at us,” Kistler said. “They actually lined up the way we planned it all week long.”

The next drive by the Broncs appeared to be stalled, but a targeting call on a hit across the middle of the field extended the drive.

Facing a fast-paced offense, Kistler called a timeout midway through the second quarter for his team to catch its breath. The Panthers stopped the Broncs on three consecutive plays and forced a field goal attempt.

PHS then blocked the kick, with a decent return giving the team some momentum with the first half winding down.

The Panthers were unable to capitalize, however, as the Broncs continued to control the line of scrimmage. This led to another punt by the Panthers, and the point at which Cody seized control.

The Broncs scored on a 64-yard run by Schroeder, though another failed two-point try made the score 18-7.

After another short drive, the Panthers punted to the Broncs again with under two minutes left, and a large return coupled with a late-hit out of bounds gave Cody another opportunity in the red zone.

The Broncs scored on a quarterback keeper from Talich, making the score 25-7 going into halftime.

“It is tough for our team because we are bigger so we are not as good at that high pace,” Kistler said.

The Broncs came back from halftime and scored a touchdown on their first drive, making the score 31-7 after another failed two-point conversion.

The Panthers strung together multiple drives in the third and fourth quarters that saw them enter Bronc territory. But again, mistakes led to turnovers, as a pass fell through a receiver’s hands, leading to an interception, and a snap over quarterback Jhett Schwahn’s head prevented the Panthers from getting any points.

The Broncs added another touchdown in the fourth quarter, which made the score 38-7.

The Panthers made one more drive in the fourth quarter, led by big runs by senior running back Toran Graham, and finished off by senior Sweeney to make the final score 38-14.

“We just need to figure out a way to get better and execute better in these big games,” Kistler said. “It is OK to lose the game when the other team out-executes you, but when you have those little mistakes for two quarters straight it is frustrating.”

Despite not being able to string any drives together for most of the game, the Panthers ended with 274 yards of offense. Smith led the Panthers on the ground with 138 yards and Schwahn added 74 yards in the air.

The Panthers defense gave up 338 yards on the ground, and 134 yards through the air.

The Powell team had multiple lineman injured in the loss, and many hobbled players throughout the game were held off the field during the last few drives due to injury concerns.

“They are all concerns,” Kistler said. “We need to figure out which injuries are a problem and which ones are OK in a couple days.”

The Panthers road does not get any easier, as they travel down to Afton on Friday to take on Star Valley (2-3, 0-1). Despite their record, the Braves narrowly lost to No. 3 Jackson on the road, taking a 22-0 lead before giving up 28 straight to end the game.