Panthers leap out to best start in three years

Starting a new season brings a new set of expectations. The Powell High School girls’ basketball team kicked off their season with a winning 2-1 record, defeating 2A opponents Tongue River and …

Panthers leap out to best start in three years 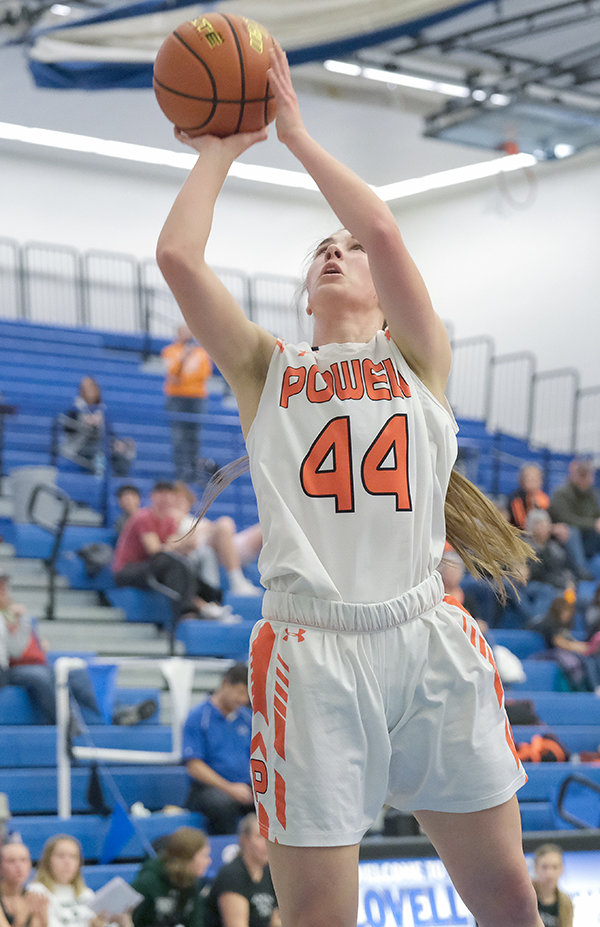 Powell High School junior Megan Jacobsen goes up for a layup during the Panther’s season opening win against Tongue River on Friday at the East/West Invitational in Lovell. The Panthers opened the season 2-1.
Tribune photo by Seth Romsa
Posted Tuesday, December 14, 2021 8:10 am
By Seth Romsa

Starting a new season brings a new set of expectations. The Powell High School girls’ basketball team kicked off their season with a winning 2-1 record, defeating 2A opponents Tongue River and Big Horn and dropping a game to 3A Buffalo at the East/West Invitational in Lovell.

Going into their first game of the season, the Panthers were looking to establish a tone by putting in a full team effort, as PHS only returned three players with significant varsity experience.

Friday’s game against Tongue River (0-3) started slow. Sophomore Waycee Harvey got the first basket of the season for the Panthers, but scoring was few and far between. The Panthers and Eagles remained tied at 2-2 until junior Megan Jacobsen hit a layup at the 2:30 mark to give PHS the lead for good.

“The girls were itching to play someone other than themselves and I felt like in our game against Tongue River we came out and executed transition fairly well,” Panther head coach Chelsea Buher said.

The Powell lead began to swell in the second quarter, as the smaller, faster Panthers started to get out in transition and find easy layups, while forcing Eagle turnovers. The Panthers also scrambled to get offensive and defensive rebounds which gave them opportunities to either work in transition or earn extra possessions.

Harvey and Jacobsen combined for 16 of the team’s first 18 points. Harvey finished as the team’s leading scorer with a 14 point and 10 rebound double-double in her first varsity game, and Jacobsen finished closely behind with 13 points.

“She [Harvey] does a great job of attacking the defense and creating opportunities for herself and her teammates,” Buher said. “Megan [Jacobsen] is a go-getter; she works hard in every facet of the game.”

Opening her first season of significant varsity experience, senior Kaili Wisniewski “did a good job with playing hard and communicating on the floor,” Buher said.

On the defensive side of the floor, Kami Jensen and Jacobsen were tasked with guarding Tongue River’s best players, and the coach said their pressure allowed junior guard Maddie Campbell to get five steals.

Campbell, along with Harvey, are the primary ball handlers for the Panthers, and Buher is hopeful to get more offensive production from Campbell in her junior season.

Early season tournaments bring fast turnarounds and the Panthers were given only a few hours break before they were thrown into action against Big Horn (0-3).

A quick drive and foul in the first minute by Harvey gave the Panthers a 1-0 lead, and the Panthers went on to lead their second contest wire-to-wire.

It wasn’t until the 6:56 mark in the second quarter — with the Panthers leading 13-0 — that Big Horn got its first points of the game. PHS led 19-4 at halftime.

“I told the girls we are going to have to do well at boxing out and then also going and getting the rebound,” Buher said. “I felt like we were able to get tips on a lot of rebounds to keep the ball alive and allowed us a better opportunity to come up with it.”

A free throw by the Rams just over a minute into the second half was their only point of the third quarter as the Panthers took a 32-5 lead into the final period. Buher put in her bench the last four minutes of the game to finish out the 44-18 victory.

Harvey again led the Panthers with nine points, followed by Jensen, Jacobsen and freshman Catelynn Floy, who all finished with eight points.

After not trailing in either of their first two games, the Panthers knew Saturday’s matchup against Buffalo (2-1) would be tough.

A slow start mixed with intense pressure from the Bison threw the Panthers off early in the game. PHS trailed 6-0 about midway through the first period, but battled their way back. A free throw from freshman Saige Kidd pulled the team within a point and PHS only trailed 14-12 going into the second period.

The Bison pushed the lead back to six in the second quarter, but a Harvey layup late in the period made it 23-20 Buffalo at halftime.

“I really felt like once we settled into that Buffalo game, we played a great first half of basketball,” Buher said. “Going into half down three, versus a team that has several returners and upper classmen, we handled ourselves well.”

In the second half, Powell came out flat. Down a player due to Jensen taking the ACT in the morning, tired legs began to set in.

Turnovers began to pile up for PHS — they would finish the game with 35 — as the pressure from Buffalo continued to mount. The Bison outscored Powell 16-5 in the third quarter and went on to win 51-33.

“Buffalo is a team we always expect to get a lot of pressure from,” Buher said. “It is difficult to simulate that type of intensity in practice, but it is something I am continuing to stress to my players, as that is the only way to continue to grow.”

Jacobsen was the leading scorer for the Panthers, putting up 10 points.

One more game waits for Powell before the Christmas break, as they will host Cody at 5:30 p.m. Friday.

“Cody has a tough returning team, who has proven to continue to excel at the 4A level,” Buher said.

She said they will put focus on this week like any normal week, and will focus on things that they did not do particularly well this past weekend, looking to build on their first winning record in three years.