Panthers get back on track

Rain didn’t deter the Powell High School football team on Friday, as the Panthers came into their game against Green River looking to snap a two-game losing streak and make a statement.

Panthers get back on track 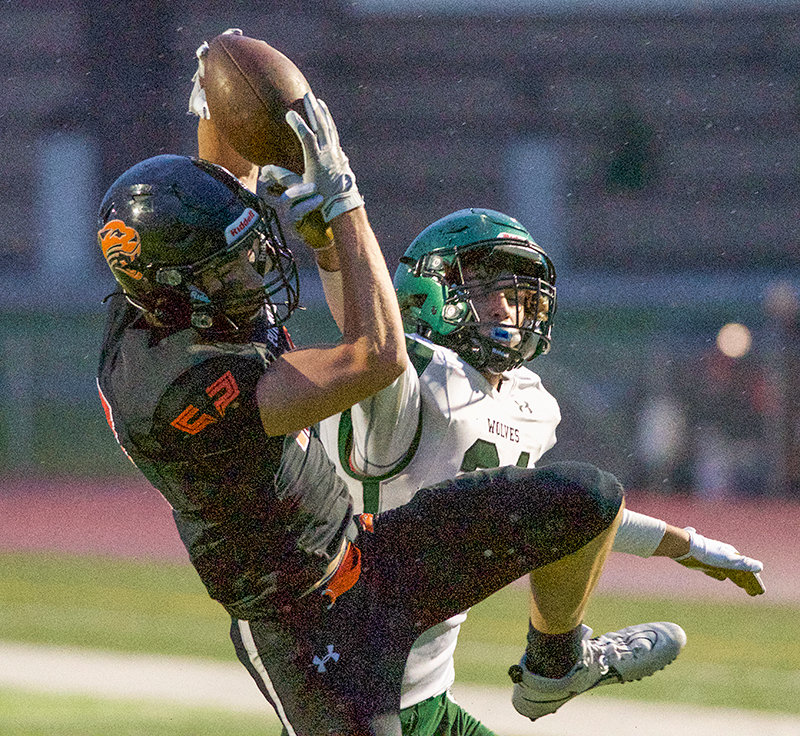 PHS junior tight end Nathan Feller hauls in his second touchdown grab of Friday’s first half as the Panthers rolled to victory over the visiting Green River Wolves.
Tribune photo by Seth Romsa 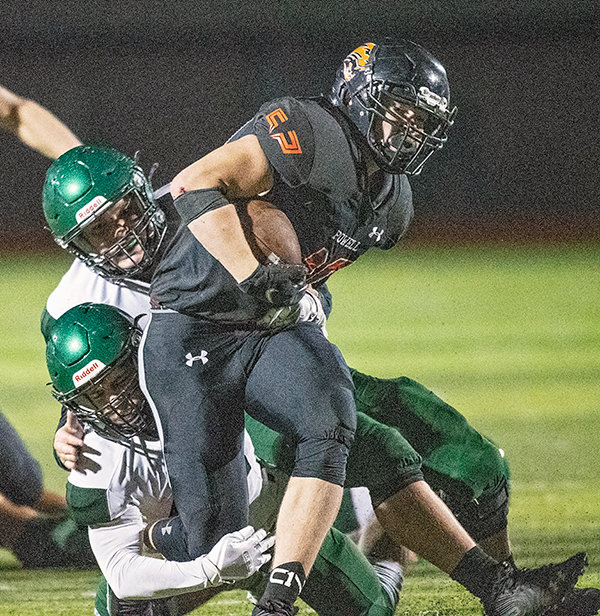 Panther running back Toran Graham drags two Green River defenders with him during Friday’s game. He ran for 67 yards in Powell’s 48-0 win.
Tribune photo by Carla Wensky
Previous Next
Posted Tuesday, October 12, 2021 8:20 am
By Seth Romsa

Rain didn’t deter the Powell High School football team on Friday, as the Panthers came into their game against Green River looking to snap a two-game losing streak and make a statement.

The Panthers (5-2 overall, 1-2 in 3A West) raced to a 48-0 victory over the Wolves (0-6 overall, 0-3 3A West) behind a four touchdown performance by sophomore quarterback Jhett Schwahn.

The Panthers started the game off with a quick drive and finished with a 13-yard play action touchdown pass from Schwahn to Nathan Feller. Coach Chase Kistler followed that drive up with the aggressive decision of going for an onside kick.

“We wanted to do the onside kick at the start of the game,” Kistler said. “We wanted to come out quick and get us back on track.”

The onside kick failed, but the Panther defense was up to the challenge — stuffing the Wolves and forcing a punt.

On the ensuing drive, Schwahn’s throw was intercepted, but that was the only blemish for his night, as he finished 10 for 16 with a career high 205 passing yards. He also collected an interception on defense.

Schwahn continued his connection with Feller as they converted a 25-yard touchdown pass midway through the
second quarter to make the score 14-0.

Not to be outdone, senior running back Reed Smith added a 10-yard TD run just over two minutes later to finish the next Panther drive and extend the lead to 21-0.

After another quick three-and-out by the Wolves, the Panthers had just under three minutes to try and find another score before the half.

Another play action pass led to a 43-yard touchdown from Schwahn to Austin Graft to make the score 28-0 at halftime.

Schwahn intercepted the Wolves on the first drive of the second half, and then led the Panthers on a four minute drive — capped off with another 12-yard touchdown pass to Graft. A failed PAT left the score at 34-0.

“He is capable of doing so much,” Kistler said about Schwahn. “He has been a great quarterback for us this year; he has been consistent and that’s the thing — he plays like that every game.”

The Wolves would not go away quietly, as they had two drives deep into Panther territory in the third and fourth quarters, but the Panthers stopped Green River on fourth down.

“We did not want to give up that shutout,” Kistler said. “Those guys earned it. They worked hard for it for four quarters and I was happy and proud of them that they got that shutout.”

With the game in hand, Smith added another touchdown from 28 yards out and Cody Seifert capped the scoring with a 3-yard touchdown to finish the game at 48-0.

Coming into the contest, the Panthers had injury concerns on their offensive and defensive lines, but they came back at full strength and didn’t overstress their players throughout the game.

Kistler said the squad played all of the players were missing last week due to injuries or COVID-19 protocols, but alternated many of the two-way players between offense and defense throughout the game to avoid re-aggravating those injuries.

PHS held the Wolves to only 40 yards on the ground and 153 yards through the air.

The Panthers will look to continue their momentum as they enter into the final stretch of the regular season and attempt to improve their seeding for the 3A playoffs, which arrive in just over two weeks. However, the road does not get easy for PHS going forward, as the team travels to Jackson on Friday to take on the Broncs (6-1 overall, 3-0 3A West) at 5 p.m.

The Panthers have not locked down a position in the playoffs, and are currently tied with Evanston and Star Valley in the western conference playoff race for third and fourth.

Powell and Evanston both have a better overall record, but Star Valley currently holds the head-to-head tiebreaker over the Panthers. The Braves and Red Devils are set to face off on Thursday.

Heading into the Jackson matchup, Kistler said he is thankful the team is healthy — and he said they’ll prepare for the Broncs just like any other team.