Worland proved to be the Powell High School boys’ soccer team’s Achilles heel in the 2021 season.

The Panthers fell 1-0 in the 3A state championship Saturday afternoon, dropping … 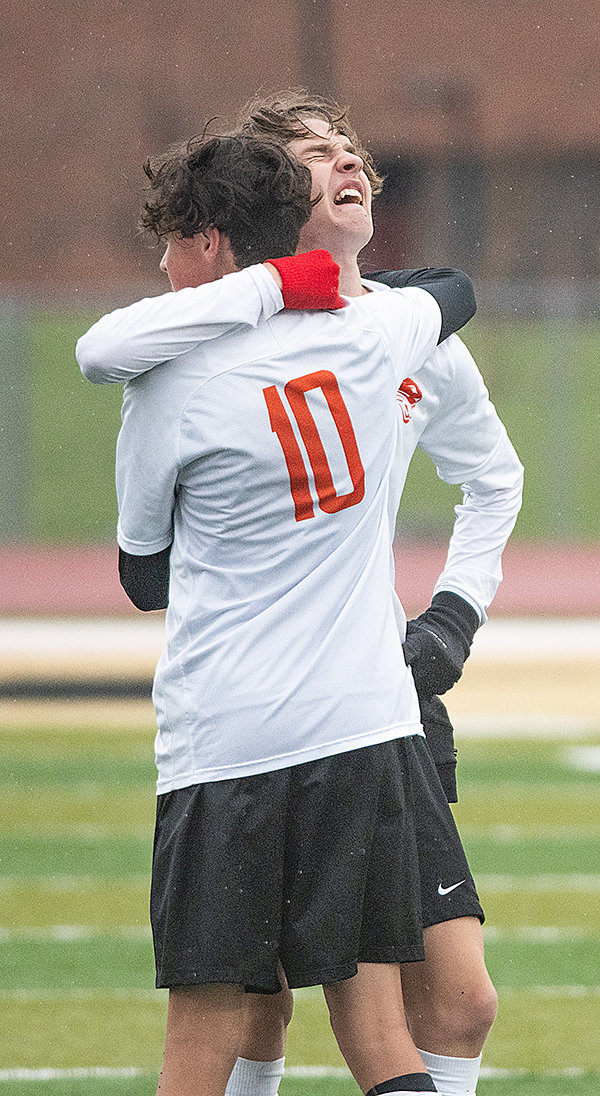 Garrett Morris embraces Gunnar Erickson (No. 10) seconds after the final buzzer sounded at the 3A state championship game. Powell lost just three times in 2021, each at the hands of Worland.
Tribune photo by Carson Field 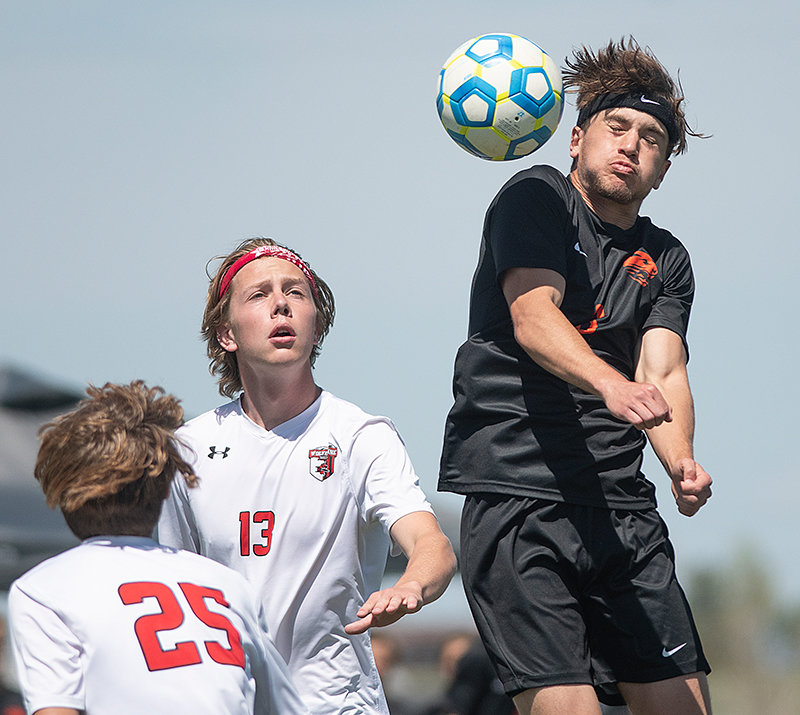 Jack Pool goes for a header Thursday in Powell’s 3-2 win over Riverton. Pool is one of several seniors who will graduate from the program.
Tribune photo by Carson Field 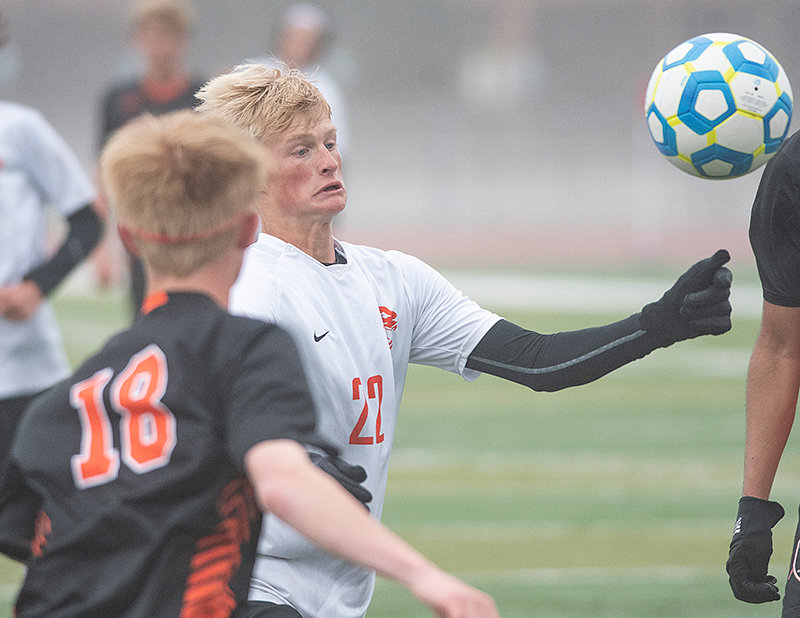 Chance Franks hits a ball with his chest Saturday in Powell’s loss to Worland. Despite inclement weather and a 1-0 deficit, the Panthers showed fight late in the championship loss to the Warriors.
Tribune photo by Carson Field 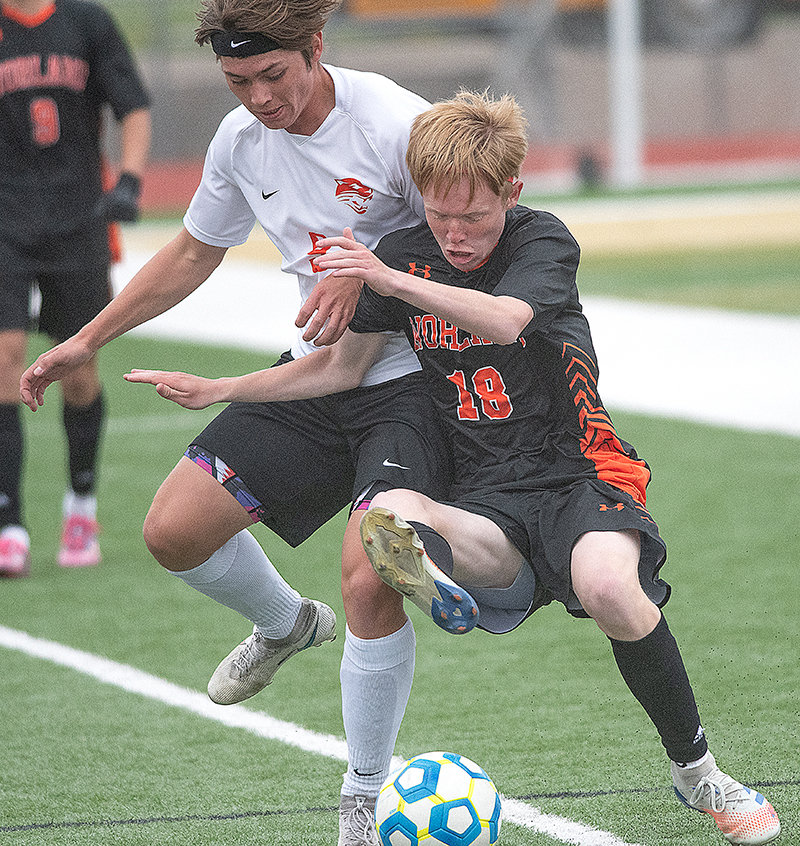 Junior Hawkin Sweeney fights for a ball with Worland’s Jackson Wassum. As soon as Powell lost, head coach David Gilliatt’s focus switched to next season, he said.
Tribune photo by Carson Field
Previous Next
Posted Tuesday, May 25, 2021 8:15 am
By Carson Field

Worland proved to be the Powell High School boys’ soccer team’s Achilles heel in the 2021 season.

The Panthers fell 1-0 in the 3A state championship Saturday afternoon, dropping their third match of the season to the No. 1-seeded Warriors. All three of Powell’s losses this year came against Worland.

“It was very difficult,” head coach David Gilliatt said. “You want to win for your own selfish reasons and want to get that success at the end of the road.”

Both teams’ defensive prowess was on full display for the match’s entirety, with time of possession split down the middle. Junior Reece Bauer in particular stood out in containing WHS standout Cole Venable, allowing very few shots.

“We knew their method of attack,” Gilliatt said. “We were able to bottle up Cole [Venable] and bottle them up as a team.”

The game’s only goal came in the 20th minute, when the Warriors converted on a penalty kick. Gilliatt admitted it was hard to tell if the penalty call was accurate, but the official said a defender made contact with Worland’s striker’s thigh.

“At the end of the day, you just have to roll with it,” the coach said.

PHS returned from halftime still in the 1-0 hole, and just three minutes into the second half, a lightning and rain delay halted the game. The inclement weather stalled the match for almost an hour.

But once the rain subsided, the Panthers returned sharp.

They saw several opportunities on goal and even were awarded a free kick from just a few yards out after the Warriors were called for obstruction. Unfortunately for PHS, the team couldn’t capitalize on these chances.

With under 15 minutes remaining in the match, refs stopped play after a ball appeared to hit a Worland defender’s forearm. After a few minutes of discussion, the officials didn’t award PHS a penalty kick; instead, Worland got a drop ball.

“Naturally, that was a little frustrating not to get the call after he blew the whistle,” Gilliatt said. “For different refs, that would be a handball.”

When the final buzzer sounded, the tears streamed down the faces of Powell’s players. They made it so far, just to lose in the 3A title game.

After collecting his thoughts, Gilliatt’s message to his players was to be proud.

“State championship is a symbol of success, but not the symbol of success,” the coach said. “It’s the growth we experienced as players, coaches, teammates along the way that has the greater value. I just told them they played extremely well and should have no regrets.”

PHS picked up two wins earlier in the tournament to get to the title game.

On Thursday, PHS took down Riverton 3-2 in the quarterfinals. Facing a Wolverines squad that played very defensively — with nearly all 11 players in the box for most of the match — the Panthers still saw plenty of offensive opportunities.

Garrett Morris drew a penalty in the box early in the first half to give the Panthers a 1-0 lead at the break. And Landon Sessions and Jesse Trotter scored goals in the second half to give Powell a 3-0 cushion.

By the time Riverton scored back-to-back goals, there were only two minutes left. Powell’s back line and midfielders played keepaway well enough to escape with the one-goal win.

The next game, a semifinal contest against Torrington, Powell was in an unfamiliar position.

The Panthers trailed Torrington 1-0, falling behind for just the third time this season. Torrington had turned a successful counterattack into a goal midway through the opening half; before that, PHS senior Sam Bauer hit the back of the net in the 17th minute but was ruled offside.

Although the Panthers dominated possession for the entire half and had several shots on goal, they weren’t able to capitalize — until they did.

“We did not panic,” Gilliatt said. “We just needed to have a little more composure in front of goal.”

In the 38th minute — two minutes before halftime — junior Hawkin Sweeney hit an equalizer in the box to make the halftime score 1-1.

“It was very well-timed,” Gilliatt said. “I knew we could still fight back if we went to halftime down a goal, but it sparked us even further going into halftime.”

Powell never looked back: After returning from the locker room, PHS added two more goals, winning 3-1 over the Trailblazers for a spot in Saturday’s 3A State Championship game.

Sweeney scored his second goal of the game on a cross from Trotter before Morris struck one past Torrington’s keeper in the last 15 minutes. Between a strong performance in goal from Ashton Brewer and exceptional defense from Matthew Hobbs and Sessions, the Panthers prevailed with a comfortable semifinal victory.

With the two wins and one loss at state, the Panthers finished the year 14-3 overall and second place in Class 3A.

For several players, the tournament marked their last donning the orange and black kits. But with several underclassmen on this year’s roster, the program’s outlook is bright.

“As soon as the game was over, next season already started for me,” Gilliatt said. “We’ve got a sickness, an obsession. We’re already planning out our pickup schedule for the summer.

“It’s all about improving between now and then and who we have coming up from middle school,” he said. “We’ve started the next season.”