Take No. 2 seed to state this weekend

Constant rainfall and smaller field conditions mixed with a matchup against the No. 1 team in the state brought out the fireworks on Thursday. Unfortunately, the Panthers boys’ soccer team came …

Take No. 2 seed to state this weekend

Needing a fast comeback in the second half, PHS senior Hawkin Sweeney takes a long shot and finds the back of the net to help drive the Panthers comeback. The Panthers came up short in Worland on Thursday, and head to the state tournament in Cheyenne as the No. 2 seed.
Photo courtesy Alex Kuhn, Northern Wyoming News 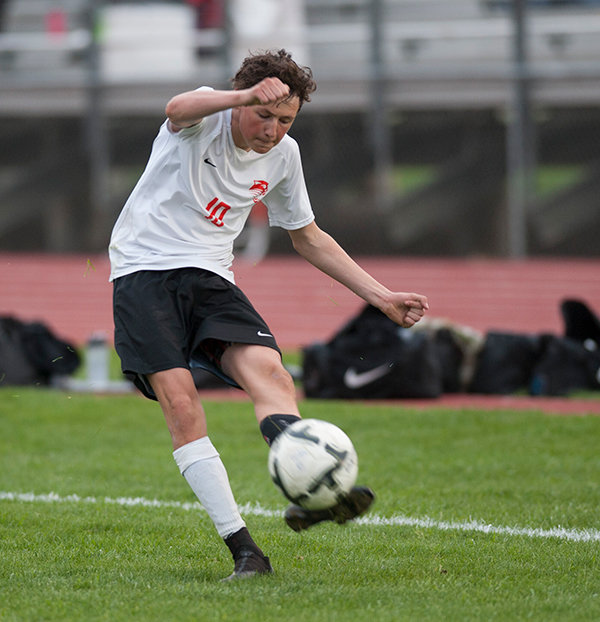 Needing to control the midfield in a fast-paced game, Panther sophomore Gunnar Erickson plays a long ball upfield as the Panthers comeback came up short to Worland 5-4 on Thursday.
Photo courtesy Alex Kuhn, Northern Wyoming News
Previous Next
Posted Tuesday, May 17, 2022 8:05 am
By Seth Romsa

Constant rainfall and smaller field conditions mixed with a matchup against the No. 1 team in the state brought out the fireworks on Thursday. Unfortunately, the Panthers boys’ soccer team came up short in the regular season finale in a 5-4 loss on the road to Worland.

Constant rain, wind and a smaller field in the Warriors football stadium allowed both teams to attack from the offset.

Worland got the first goal 11 minutes into the contest after a long diagonal through ball found its way behind the Panther defense.

The ball was taken down, and a Panther defender slipped when trying to break down, allowing the Worland striker to put it past the keeper to make it 1-0.

“It is hard to prepare for a field that size,” Panther Boys’ Soccer Head Coach David Gilliatt said. “The first half was super wet and windy and threw us off.”

Powell responded, as a quick throw-in from senior Kaleb Brown found sophomore Chance Franks. Franks got behind the Warrior defense and put it in the back to tie the game with 21 minutes remaining in the half.

Worland took the lead back with 8:30 left, as they found the back of the net on a corner kick that failed to get cleared out and was struck hard into the top left corner.

That score was the final one of the first half, as the Panthers trailed 2-1 heading into the break.

Worland got a third goal just over a minute into the second half. Worland extended the lead out to two as they tried to pull away from Powell.

Powell did not lie down.

Three minutes after the lead was extended out to 3-1, senior Hawkin Sweeney took advantage of the Worland keeper being out of position. Sweeney kicked a shot from 25 yards out and found the bottom corner — cutting the lead to 3-2.

Another three minutes passed before Sweeney headed on a ball that found Brown at the back post. Brown tapped it in to tie the game at 3-3 as the Panthers responded in a short amount of time.

The Panthers were not done.

With 26 minutes showing on the clock the ball found its way to senior Keaton Rowton on a corner kick who rifled it past the keeper — completing the comeback in just 12 minutes for Powell.

Worland was not done with the scoring.

Worland got the game-tying goal at 1:40, setting up a final 25 minutes riddled with opportunities trying to find a winner at both ends of the field.

Both teams had attacking opportunities, but Worland found the game winner.

With just under eight minutes remaining, a controversial penalty was called on a throw-in, giving the Warriors a shot from the mark to try and win the match.

The penalty scored, and Worland walked away with a 5-4 victory.

“It was difficult to coach your players the type of physicality to play when the calls are inconsistent,” Gilliatt said.

After the loss the Panthers suffered a second blemish on their record and first defeat in conference, dropping Powell down to the No. 2 seed out of the west at the state tournament.

Powell now heads to the state tournament in Cheyenne in hopes of finishing the season on top and winning the program’s first state championship.

The Panthers start at the tournament, as the team plays in the first game on Thursday at 9 a.m.

Powell matches up in the first game against east No. 3 seed Riverton (9-7 overall, 7-3 3A East), in a rematch of the first game from last year’s state tournament the Panthers won 3-2.

“I am not going to overlook them,” Gilliatt said. “We are strategizing how to play based on how they play.”

Gilliatt is hoping the early kickoff on Thursday will allow for the Panthers to have extra rest in between games on Thursday and Friday.

If the Panthers lose on Thursday they will play again on Friday at 9 a.m. against the loser of Lander and Torrington.

Should the Panthers win both games they will advance to the championship game on Saturday, which is slated to start at 3 p.m.