A state tournament in which the Panther boys’ soccer team was hoping to be hoisting its first state championship ended in disappointment, as the Panthers lost in the semifinal to Torrington 1-0 … 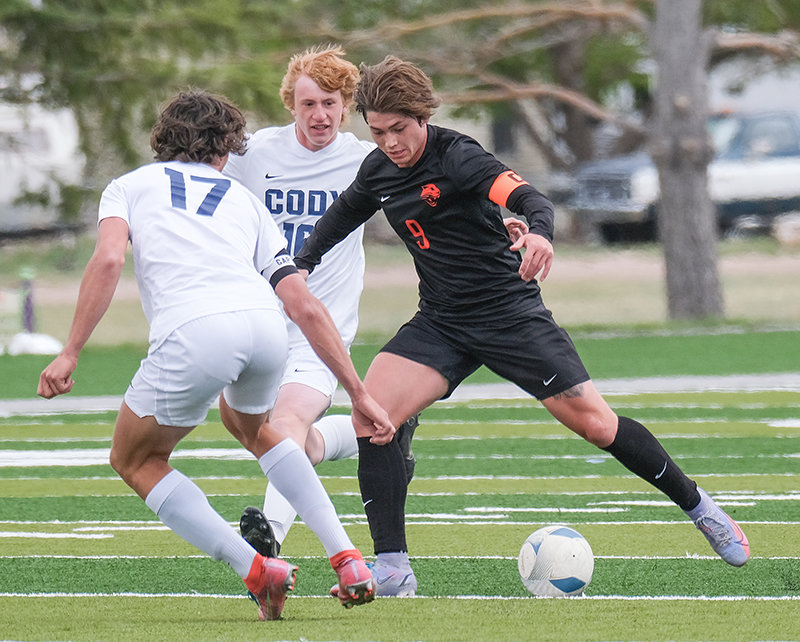 Looking for one last victory against rivals Cody, senior Hawkin Sweeney pushes the ball up the field on Saturday in the third place game in Cheyenne. Sweeney finished with the second most goals in class 3A this season.
Tribune photo by Seth Romsa 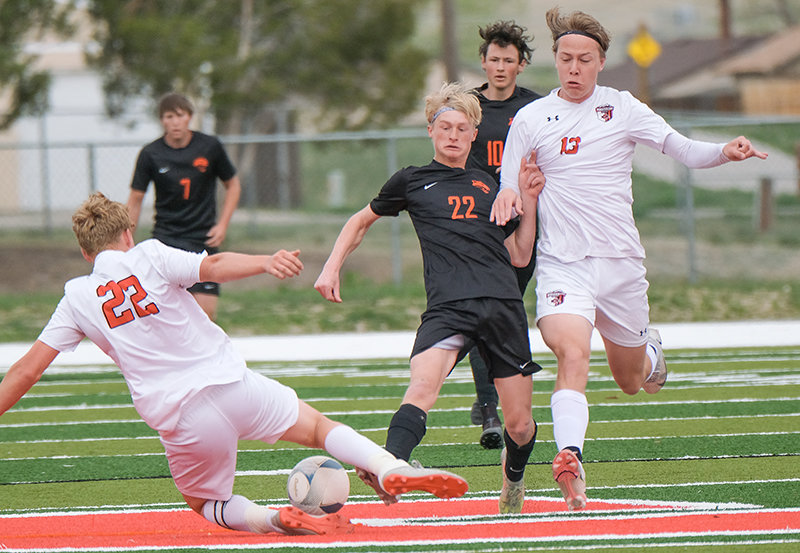 The Panthers got off on the right foot to start the tournament against Riverton as the Panthers cruised to a 3-1 victory in the opening round. PHS sophomore Chance Franks expects to be a key part of the Panther squad moving forward.
Tribune photo by Seth Romsa
Previous Next
Posted Tuesday, May 24, 2022 8:10 am
By Seth Romsa

A state tournament in which the Panther boys’ soccer team was hoping to be hoisting its first state championship ended in disappointment, as the Panthers lost in the semifinal to Torrington 1-0 but rebounded to place third, defeating Cody 1-0.

The tournament started strong for the Panthers, as Powell (14-3-1 overall) took on the No. 3 seed out of the east Riverton (9-9 overall) in the opening quarterfinal match of the tournament.

Blustery conditions affected the game at both ends of the field, as Riverton packed the box in order to defend Powell’s strong attack.

The defense did not stand long.

Sophomore Chance Franks got the Panthers on the board immediately, as he scored less than a minute into the game to give Powell an early advantage.

Riverton remained in its deep-set defensive position, but Powell broke through again early.

Senior Hawkin Sweeney scored less than two minutes after Franks as the Panthers were rolling early.

“Our plan was to play that game like it was 40 minutes long and attempt to win the game in the first half,” Panther Boys’ Soccer Head Coach David Gilliatt said. “We just knew we would need to rotate players as soon as possible if we were going to be able to effectively play three games.”

The Panthers continued to build on that early success, as Sweeney added a second goal 16 minutes into the game, and Gilliatt rotated players into the game in order to preserve energy.

In the second half, Powell played into the wind, and the game evened out for opportunities to score as Riverton found some opportunities on the counter attack.

Riverton got its goal when a long shot got caught underneath the wind and found its way into the back of the net to make it 3-1 with under a minute remaining.

Despite the victory, the Panthers did not come out of the game unscathed. Starting defender, junior Steven Stambaugh, suffered a sprained ankle in the contest that held him out the rest of the weekend.

Heading into the semifinal, the Panthers were faced with an opportunity to make their third consecutive championship game, as Powell matched up with east No. 1 seed Torrington (13-5 overall).

The conditions shifted significantly from Thursday, as snow had fallen overnight and temperatures remained in the 40s along with a consistent breeze.

Powell again got the wind in the first half and applied constant pressure to the Trailblazer backline.

The Panthers had multiple opportunities to take the lead. They hit the frame on multiple occasions but were unable to find a way past the Torrington defense.

In the second half the same story continued, but Torrington created more opportunities.

With both teams still unable to find the net, the game remained tied 0-0 heading into the final five minutes.

Torrington got its breakthrough, as a Panther defender fell down and an immediate shot from a Torrington attacker 25 yards out found its way across the frame into the top corner to make it 1-0 with 3:30 left.

“It is very frustrating to dominate possession but struggle to score in the end,” Gilliatt said. “I do not know the exact number of shots we had, but we certainly outshot them by a wide margin. In the end, they successfully packed the box and prevented us from finding the net.”

Powell tried to find an answer but was unable to, and the Panthers fell short of a championship rematch with Worland.

Without Stambaugh, Gilliatt said that junior Morgan Hobbs and freshman Landon Hernandez did a good job rotating in to cover his position in shifts. Gilliatt said senior Garrett Morris was also battling injury throughout the weekend as he dislocated his shoulder in the regular season finale against Worland; he went on, however, to play nearly every minute of the tournament.

After the loss, Gilliatt said he allowed the team to process the loss that night before turning its focus to Cody (9-8 overall) on Saturday in the third place game.

Cody, much like Torrington and Riverton, came out early with the intent to pack the box and prevent the Panthers from scoring while attempting to score on the counter.

Both teams had opportunities to score, but the teams went into halftime deadlocked at 0-0.

In the second half, Powell was able to get its winner, as senior Kaleb Brown found the back of the net to give the Panthers the win 1-0 over Cody.

“I was really proud of my boys for not getting too frustrated and finally breaking through to get the goal,” Gilliatt said. “Kaleb Brown had struggled to find the net earlier in the season but came up big with the game winner against Cody that day.”

Gilliatt said he was proud of how Brown has overcome different obstacles in missing his sophomore and junior seasons, and it was a fulfilling moment to see him score the game-winning goal.

After the third place finish, the Panthers have now placed in the top three each year with Gilliatt at the helm.

The Panther boys say goodbye to a large portion of goal contributions this year as seniors Sweeney and Keaton Rowton combined for 52 goals and 20 assists, while Morris, Brown, Reece Bauer and Colton Brewer all played key parts in the development of the Panthers over the past four years.

The Panthers return significant talent next season as well, as they return a majority of the defense and midfield but will need to replace significant contributions up top. The smaller, younger Panthers will need to take a step up heading into next year.

“Spring 2023 starts next week,” Gilliatt said. “The boys will have open field all summer and open gym all winter. I am looking for dedication to self-improvement and nature to take its course with some of my guys. While I wholeheartedly believe that size is a state of mind, getting bigger and stronger never hurts anything.”