When the Powell Panther boys’ basketball team takes to the court next week, the squad will be looking to make its first appearance at the Class 3A state basketball tournament since 2019. 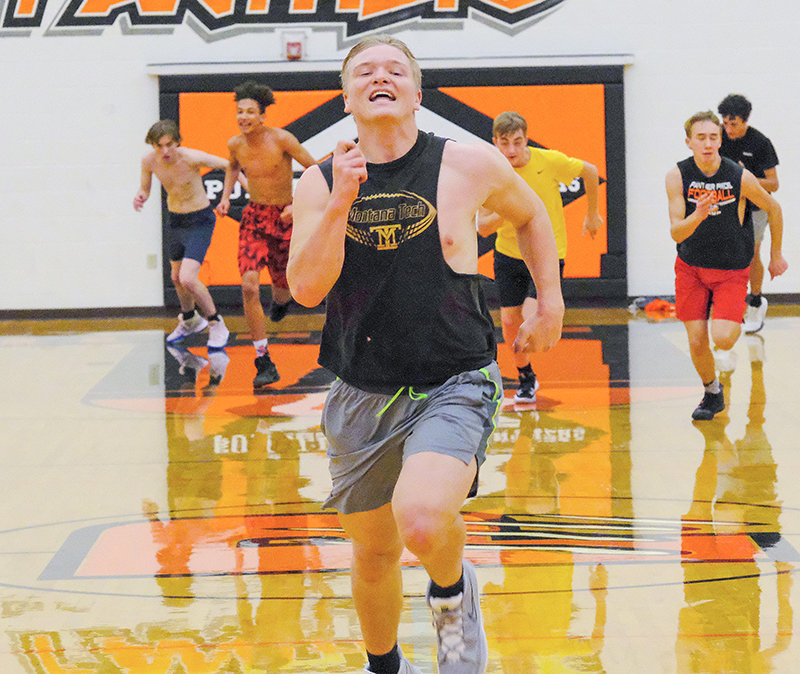 PHS senior Toran Graham sprints ahead of the rest of the team during a conditioning exercise after practice on Nov. 23. The Panthers will be looking to replace six seniors who graduated from the program at the end of last season.
Tribune photo by Seth Romsa
Posted Thursday, December 2, 2021 8:20 am
By Seth Romsa

When the Powell Panther boys’ basketball team takes to the court next week, the squad will be looking to make its first appearance at the Class 3A state basketball tournament since 2019.

The Panthers will once again be led by head coach Mike Heny, who will return for his second straight year. Heny also served as the team’s head coach from 2009-2013.

However despite the familiar face at the helm, this year’s Panthers will have a very different look from last year.

Despite graduating so much experience from last year, the Panthers will feature seniors Toran Graham and Zach Ratcliff and sophomore Brock Johnson, who played significant minutes at the varsity level last year.

“We are just kind of scratching the surface of what we have,” Heny said.

In addition to those returners, the Panthers will receive significant playing time from the sophomore class, who went undefeated as freshmen last year.

Beyond Johnson, the class includes Jhett Schwahn, Trey Stenerson (who is returning from injury), Marshall Lewis and Gunnar Erickson. Erickson joined the varsity team at the regional play-in game to end the year. Heny added that other sophomores will play significant minutes at the junior varsity level this year.

“We will have a combination of some older guys and some sophomores and some good talented basketball players,” Heny said. “I think we will be good once we gel a little bit and get that experience early in the season.”

The coach anticipates there will be a need to determine rotations early on, but once they figure out the team’s strengths, they will be a tough out at the end of the season.

Both Worland and Lander, who were the other two top teams in the northwest quadrant last year, lost significant players, Heny said, but he anticipates they will still be competitive, along with Lovell.

It has been a difficult couple of years since the Panthers made the state championship game in 2019.

PHS qualified for the Class 3A tournament in 2020, but it was canceled at the last second due to the arrival of COVID-19. Then, after posting a 14-5 record and being ranked as one of the top three rated teams throughout the regular season in 2020-21, the Panthers were eliminated in a one-and-done loss at the regional tournament in March.

The new season kicks off next weekend, as the Panthers will head on the road to Buffalo to take part in the East/West Classic on Friday, Dec. 10 and Saturday, Dec. 11.

With the return to a normal double-elimination format this year, the Panthers will host regionals in early March with the hopes of returning to the state tournament.

“The goal as always is to get to Casper,” Heny said.