The Panther tennis team experienced a set of mixed results at the state tennis meet in Gillette. 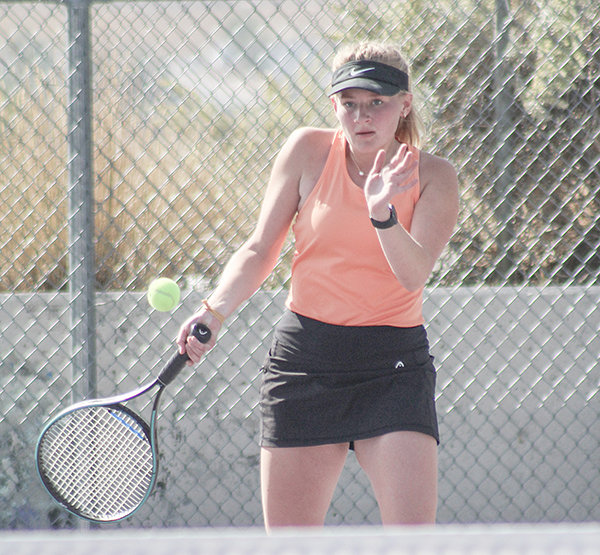 The Panther tennis team experienced a set of mixed results at the state tennis meet in Gillette.

The boys team finished ninth overall, and the girls team finished in 12th, but the boys’ No. 1 doubles team of Logan Brown and Kolt Flores broke through to take fourth place.

Brown and Flores began an impressive weekend by winning their first match 6-2, 6-4 over the duo of Justin Van Kirk and Nathaniel Thornell from Cheyenne Central. They continued their way into the semifinals with a win over Campbell County, taking both sets 6-4.

“I was excited to see these guys through the end of the season,” Powell High School coach Joe Asay said of Flores and Brown. “I knew they would continue to improve as the season progressed.”

The duo then lost the semifinal against the eventual state runners-up from Sheridan, 6-3, 6-4. Brown and Flores then dropped down to the consolation semifinals into a rematch with Van Kirk and Thornell and they dropped the first set 6-3. However, the Panther pair battled back, winning the next two sets 6-4 and 6-3 to set up a consolation final with a familiar foe: Cody Champlin and Mitchell Schwab of Cody.

Brown and Flores lost the consolation final 6-1 and 6-2 to finish the season as the fourth best No. 1 doubles team in the state.

“The fourth place finish to Cody was great, but I was especially proud of their win over Campbell County in the second round,” Asay said.

Ethan Bartholomew continued his impressive play in No. 1 singles and won his first match over Cheyenne East’s Nick Colgan 6-2, 6-3 to advance into the quarterfinals.

Bartholomew then lost to Cheyenne South’s Andrew Lock 6-1, 6-0 to drop down to the consolation bracket.

However, Bartholomew then beat Cheyenne Central’s Isaiah Rigg 6-2, 6-4, and Campbell County’s Jason Fink 6-2, 6-3 to advance to the consolation semifinal.

Unfortunately for Bartholomew, his weekend ended early and he was forced to withdraw due to severe leg cramps that began affecting him in the second set of his match with Green River’s Braxton Cordova.

“He was playing great tennis,” Asay said. “It was extremely difficult to see him go out this way.”

Despite his injury, Bartholomew still finished high enough to earn All State honors.

On the girls’ side, PHS No. 1 singles player Chase Anderson lost her opening match 6-2, 6-2 against Paige Frazier from Cheyenne East.

She bounced back, beating Bethany Wunibald from Torrington 6-1, 4-6, 6-3 to advance in the consolation bracket. Gabrielle Heiser from Green River, 6-2, 6-4 then knocked Anderson out of the tournament with a record of 1-2.

No. 2 girls’ singles played Kaili Wisniewski lost 6-0, 6-0 to Cheyenne Central’s Grace Osterland dropping her down to the consolation bracket. She won her next match over Cheyenne South’s Lexie Taylor 6-2, 6-3 to set up a match with Anna Brenner of Cody. Brenner got the better of Wisniewski, winning in both sets 6-1.

No. 2 boys’ singles player Aiden Chandler lost his first match 6-0, 6-0 to Korbin Arnell of Green River. Chandler rebounded by beating Jaxon Smith from Rock Springs 6-1, 6-2 to set up another matchup with Tade Geving from Cody.

Hull and Hincks came back and won their first consolation bracket match 6-1, 7-5 over Rawlins before falling 6-2, 6-0 to Jackson.

After playing together for the first time at regionals last weekend, the unfamiliar duo of Cade Queen and Wesley Preator improved in their second competition together as No. 2 doubles.

Queen and Preator bounced back in the consolation bracket, beating a duo from Rock Springs 7-5, 6-2 and another from Torrington 4-6, 6-3, 6-1 to reach the consolation quarterfinals.

No. 2 girls’ doubles duo of Alli Harp and Alexis Terry won their first match at state against Green River 3-6, 6-4, 6-3 but lost to eventual state champions Harper Klinger and Ella Catchpole from Kelly Walsh 6-2, 6-2.

The duo then beat a team from Cheyenne East 6-3, 6-2 before losing to eventual third place winners Isaak Mamot and Treydon Ward from KW, 7-5, 6-2.

Powell’s No. 3 girls’ doubles team of Lachelle Lee and Tyler Sessions lost their opening match to the eventual state runners-up from Natrona County 6-2, 6-3, then lost their consolation match to Cody, 6-0, 6-2.