After a tough two-week stretch, the Panther volleyball team turned things around on Thursday. The Powell High School squad earned a five set-victory at the rival Lovell Bulldogs to earn its first … 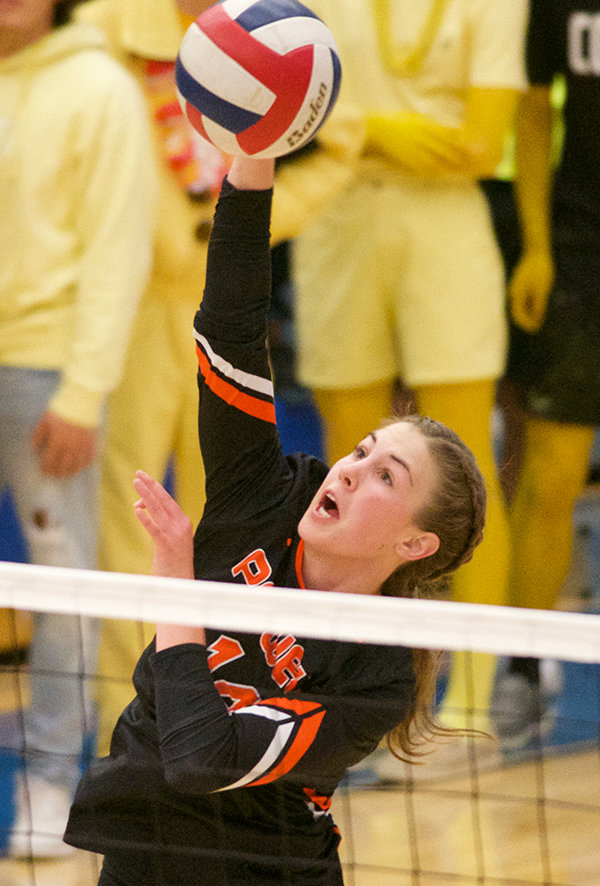 Megan Jacobsen goes up for the kill against the Bulldogs on Thursday. Jacobsen played a key role in keeping the Panthers in the match in the fifth set, in which PHS came back to win.
Tribune photo by Seth Romsa
Previous Next
Posted Tuesday, October 5, 2021 8:25 am
By Seth Romsa

After a tough two-week stretch, the Panther volleyball team turned things around on Thursday. The Powell High School squad earned a five set-victory at the rival Lovell Bulldogs to earn its first conference victory of the season.

The Panthers (9-13 overall, 1-2 northwest quadrant) entered the contest on a five-match losing streak, and were struggling to find their footing after a loss earlier in the week to Red Lodge, Montana.

The first set against Lovell started out back-and-forth, with the teams battling to a 6-6 tie. Then the Panthers began to create some separation. Thanks to good serving, the Powell girls outscored the Bulldogs 16-5 over the next 21 points to all but put away the first set.

The second set was dominated early by the Bulldogs as they jumped out to an 8-2 lead, due to a mix of good Bulldog serving coupled with miscommunication and poor side out returns from the Panthers.

However, the Panthers were able to adjust and get back into the set, pulling within 13-10, thanks to the hitting and blocking of sophomore Addy Thorington.

“We are working with all of the girls to speed up the offense, Addy started calling the quicker sets and it worked,” coach Lesli Spencer said.

Despite working their way back into the second set, the Panthers were never able to fully recover from the slow start and the Bulldogs pulled away to win 25-21.

The third set, much like the first, started out with a back and forth battle, with the Panthers holding a slight 6-4 advantage through the first 10 points.

“Lovell is a very tough team to play,” Spencer said. “They get the ball back over the net a lot when you think it should be over.”

A combination of good serving from PHS sophomore Stevee Walsh and hitting from junior Megan Jacobsen helped the Panthers go on a 9-2 run to widen the match to a 15-6 advantage.

The Panthers held off another late Lovell rally to win the third set 25-19.

Heading into the decisive set, Spencer felt her team was able to win.

“We talked about discipline and wanting to win more than Lovell,” Spencer said. “Do your job, believe in yourself and your teammates and have the desire to finish.”

The fifth set was close from start to end.

Maddie Campbell played a huge part in the set, helping keep the Panthers toe-to-toe with the Bulldogs.

Late in the 15-point set, the Bulldogs led 13-12, which led to a timeout from the Panther coach.

“I told them I believed they could do it and that they should believe in themselves,” Spencer said.

Three straight points — capped by a block from senior Ashlyn Shorb — helped seal a 15-13 fifth set victory for the Panthers.

“Beating a conference opponent on their court during [Lovell’s] homecoming is a very good thing,” Spencer said.

Earlier in the week, on Sept. 28, the Panthers made the trip to Red Lodge to take on an out-of-state opponent.

The match started well with the Panthers winning the first two sets 28-26 and 26-24.

However, things did not continue that way, as the Powell team could not regain its focus after the third set.

“We lost our focus in the beginning of the third set and could not get it back,” Spencer said.

The Panthers will now get a week to regain focus and rest before the conference duals on Friday and Saturday at Lovell.

The event will feature four of the top five teams in the state, including northwest quadrant opponents Lander, Worland and Lovell along with the southwest quadrant teams of Mountain View, Lyman, Pinedale and Kemmerer.

All varsity games will be played at Lovell High School, with the junior varsity squad at Lovell Middle School at 4 p.m. and 7 p.m. Friday along with 9 a.m. and 12 p.m. Saturday.