Panther wrestling was back in town Tuesday, as the grapplers welcomed two top Montana teams: Huntley Project — the state’s top-ranked team in the B division — and Laurel, which is …

PHS junior Vinny Timmons holds down Huntley Project’s Hayden Ramaeker as he tries to finish off Tuesday’s match. Timmons pinned Ramaeker in the first period at the 1:22 mark, but the Panthers dropped the matchup to Huntley Project 59-21.
Tribune photo by Carla Wensky 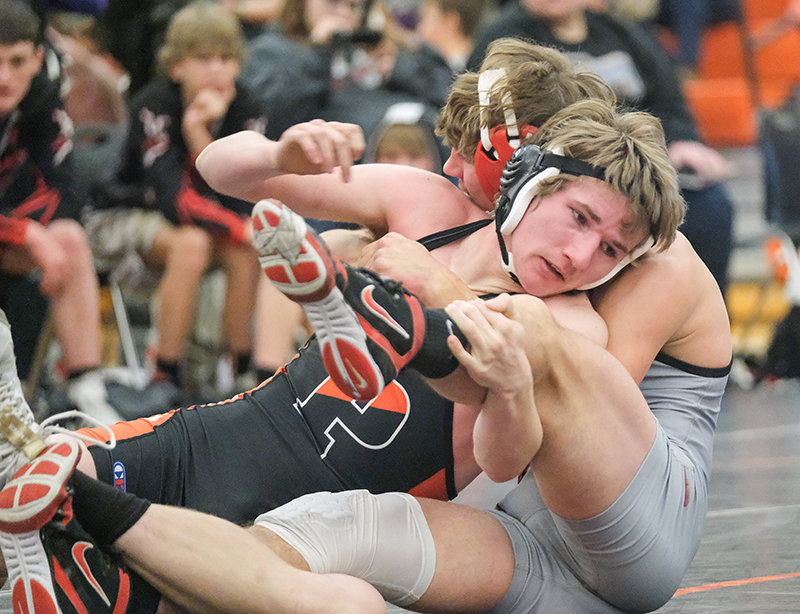 PHS junior Jack Van Norman battles with Huntley Project’s Grady Schmidt in the Panthers’ first dual of the night. The Panthers lost both duals to Huntley Project and Laurel before heading back to Montana this weekend for the Jug Beck Rocky Mountain Classic in Missoula.
Tribune photo by Seth Romsa 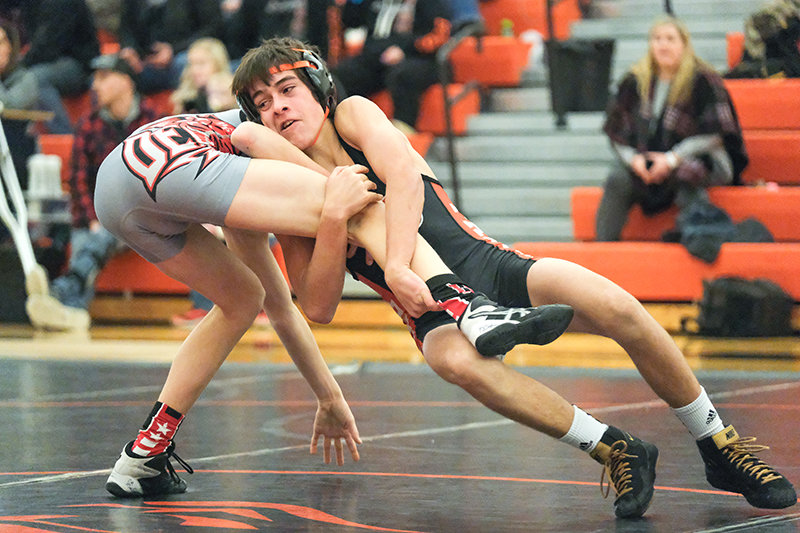 PHS freshman Kaiden Apodaca pushes through Huntley Project’s Baylor Burton into a takedown to start off the duals at 106 for the Panthers.
Tribune photo by Seth Romsa
Previous Next
Posted Thursday, January 13, 2022 8:25 am
By Seth Romsa

Panther wrestling was back in town Tuesday, as the grapplers welcomed two top Montana teams: Huntley Project — the state’s top-ranked team in the B division — and Laurel, which is the A division’s second-ranked team.

The night started with a back and forth contest at 106 pounds. PHS freshman Kaiden Apodaca got an early takedown on Huntley Project’s Baylor Burton, but Burton then earned a reversal; both athletes each earned two points off another reversal to tie the match at 4.

Near the end of the period, Burton earned a near fall and took a 6-4 lead, and he followed that by pinning Apodaca at the 2:44 mark in the second period. That gave Huntley Project a 6-0 lead and set the tone for the night; only one dual between Huntley Project and Powell went the distance without a pin.

Panther head coach Nick Fulton felt like his younger wrestlers came out with some intensity, but were unable to find that final push to win their matches at this point in the season.

“We were in matches, but we were just not consistent enough to finish those,” Fulton said. “Some of that is age and some of it is being more consistent through a six-minute match.”

Sam Childers earned a bye at 113 pounds as Huntley Project did not field a wrestler, which tied the match at 6-6.

Powell High School’s Andrew Valdez was involved in the only match that went the distance at 138 pounds against Huntley Project. He used a strong first period with two takedowns and a two-point near fall to take a 6-1 lead after one. Valdez carried that momentum and maintained his lead to walk away with an 11-5 decision to pull the Panthers within 18-15.

Fulton’s message throughout the night for his athletes was to attack, and try to score points quickly and often.

“In wrestling you don’t learn how to score points unless you are trying to score points all the time,” Fulton said. “We want a high pace and an offensive style and that is how we learn too.”

Laurel followed up the loss at 113 pounds with six consecutive pins of the Panthers, until the 170 match between Karson Lamb and Camden Johnson.

Lamb and Johnson were involved in a close match early on until an injury to Johnson forced a timeout. Johnson recovered from the hiccup, and took control of the match in the second and third periods, earning a technical fall over Lamb 18-3, to make the match 41-12.

Fulton said he was shocked by the three straight forfeits, as he was hoping to see the 182-pound matchup to help gauge Davis’ progress against Laurel’s wrestler, who had gotten the better of Davis in their last matchup.

Since the dual started at 113 pounds, the final match was at 106 with a chance for Powell to take a victory over the visitors. Apodaca was pinned at the 1:07 mark to make the final score 47-36, Laurel.

“It was nice to get out there in front of a large home crowd,” Fulton said.

The Panthers head back out on the road this weekend, as they travel back to Montana to take part in the Jug Beck Rocky Mountain Classic in Missoula. The event will feature teams from Montana, Idaho and Washington, with Powell being the lone Wyoming participant.