Panthers coast in victory over GRHS

Five-and-a-half hours on the road didn’t faze the Panthers.

The boys’ soccer team ventured south to Green River Saturday for its toughest test to date, an afternoon tilt against the …

Panthers coast in victory over GRHS 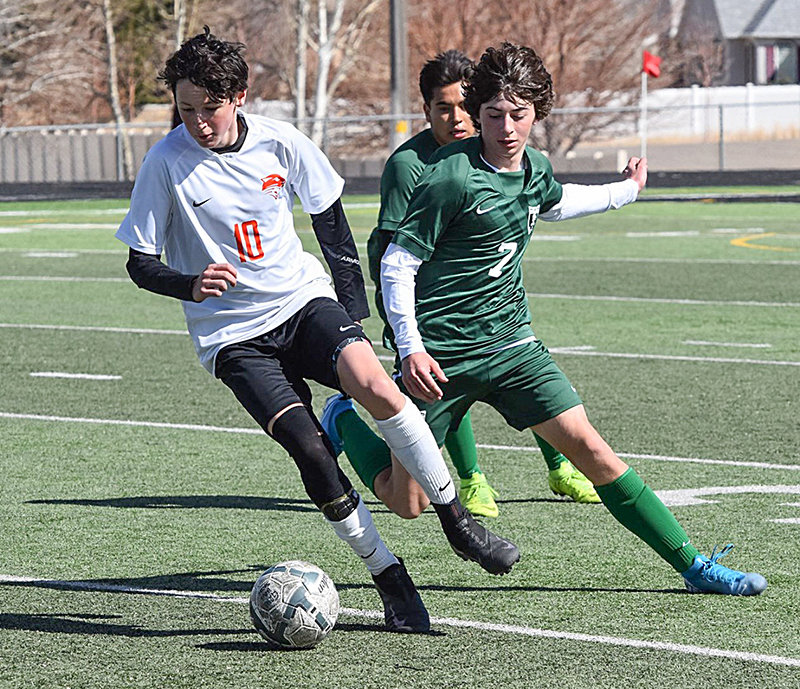 Freshman Gunnar Erickson scoots past a defender Saturday in Powell’s 5-1 win over Green River. Erickson’s second-half goal off the laces was the most impressive of the match, according to coach David Gilliatt.
Photo courtesy Olivia Kennah, SweetwaterNOW
Posted Tuesday, March 30, 2021 8:15 am
By Carson Field

Five-and-a-half hours on the road didn’t faze the Panthers.

The boys’ soccer team ventured south to Green River Saturday for its toughest test to date, an afternoon tilt against the Wolves. PHS advanced to 3-0 on the year, defeating GRHS 5-1.

Powell didn’t find its rhythm until about 15 minutes in, but once the Panthers caught fire, there was no going back.

“We executed our gameplan, and everybody did their job,” head coach David Gilliatt said.

Four Panthers showed up on the score sheet in the win: Hawkin Sweeney, Gunnar Erickson, Chance Franks and Jesse Trotter.

Sweeney notched two goals, once again leading the team in scoring. After a six-goal outing against Cody five days prior, Sweeney was hungry for more, according to Gilliatt. But the coach said he was more than pleased with the junior’s two-goal performance.

Erickson, who won man of the match, hit the back of the net on a dazzling goal in the second half. The freshman booted a bouncing ball with his laces while being trucked by a defender. He still hit it past the GRHS keeper, despite falling to the ground.

“It was a great goal and would have been a foul if he didn’t score,” Gilliatt said.

Senior Jesse Trotter played a “really good game offensively and defensively” and had a goal called back, due to offsides, the coach said. Gilliatt also noted Franks and Garrett Morris as others who competed “very well.”

Though Green River is a “big, physical, fairly deep team” per Gilliatt, his squad wasn’t intimidated.

“The guys have settled in; they’re playing our style,” Gilliatt said. “Nerves weren’t a factor for this match.”

Powell now returns to town for its first home match of 2021. While Green River was the Panthers’ hardest match to date, their contest today (Tuesday) will one-up that.

They host Worland — the No. 1 team in 3A — at 5 p.m. Most recently, the Warriors cruised to a 7-0 victory over Riverton Saturday.

While the Panthers are well aware of their opponent’s prowess, they aren’t backing down from the early-season test.

“I’m confident if we play our game, Worland is beatable,” Gilliatt said. “They’re well-coached and organized. They play a good brand of soccer, and I look forward to the challenge.”