Coming off a seventh place finish at state last year, the Panther wrestling team boasts its largest roster ever.

A total of 46 student-athletes went out for the Powell High School squad this year, … 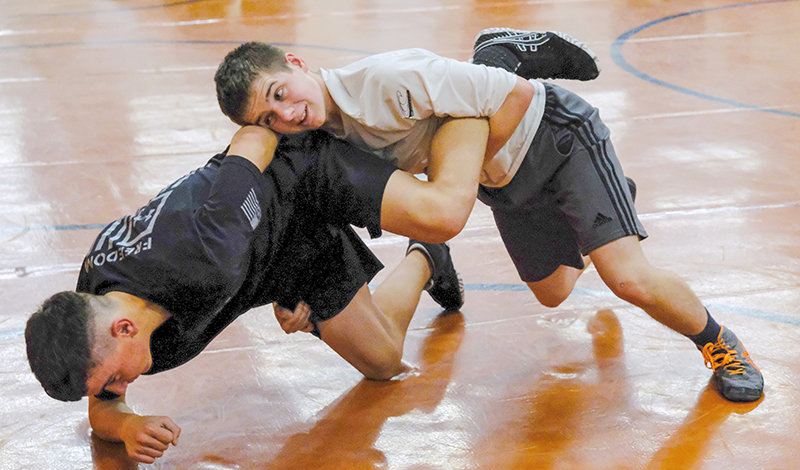 Patrick Haney (left) and Sam Childers (right) work on a takedown drill as the Panthers begin a practice before the Thanksgiving break. Childers brings varsity experience to a young Panther roster that returns only one placer from last year’s state tournament team.
Tribune photo by Seth Romsa
Posted Thursday, December 2, 2021 8:10 am
By Seth Romsa

Coming off a seventh place finish at state last year, the Panther wrestling team boasts its largest roster ever.

A total of 46 student-athletes went out for the Powell High School squad this year, including more than 20 freshmen.

Despite the young roster, the Panthers return multiple wrestlers with consistent varsity experience. They include one placer from the 2021 state tournament in Vinny Timmons, who finished sixth at 126 pounds, along with wrestlers Karson Lamb at 182, Brent Childers at 132, Jack Van Norman at 145, Lannon Brazelton at 160, Weston Thomas at 113 and Stetson Davis at 170.

Heading the team in his second year at the helm will be head coach Nick Fulton. He said a lot of the varsity experience will come through the junior class mixed in with some seniors.

“We are going to be a better team in February than we are in December,” Fulton said. “This is probably the biggest team that we have seen that I can remember.”

Coming into this season, he said the team is expected to have a normal season compared to last year’s edition, which saw multiple restrictions for competition and practice due to COVID-19.

Last year the team was only able to participate in duals during the regular season. Fulton felt that hindered wrestlers as the year went on, because they were unable to compete in a wrestle-back/tournament style competition.

The state tournament was also limited to one day, which made it more difficult for each wrestler to compete due to the fast turnaround times. The two-day format will return on Feb. 25-26 in Casper.

“I am excited this year to see our guys progress through brackets and learn how to wrestle up their match each time,” Fulton said.

A return to normality for tournament matches is something that Fulton is hoping for this year, but that will not change the coaching style he’s used during his 15-plus years of experience as a head coach at Lander and an assistant coach in Powell.

Fulton, along with his assistants Juston Carter and Cody Kalberer, plan to again start all their wrestlers with the basics and continue to progress them throughout the season with the hopes of placing at the state tournament.

“We stick with fundamentals until we get those down,” Fulton said. “We hope to progress kids throughout the year as we watch them perform and wrestle, you gotta crawl before you can walk.”

He expects that there will be growing pains throughout the season — especially with nearly half of the team being freshmen — but said he feels the future is bright with the work ethic and the number of athletes out for the team.