Opening weekend of high school wrestling season brought 23 teams and 430 competitors to Powell from Wyoming and Montana for the weekend.

With 22 rostered freshmen and a lack of varsity experience, … 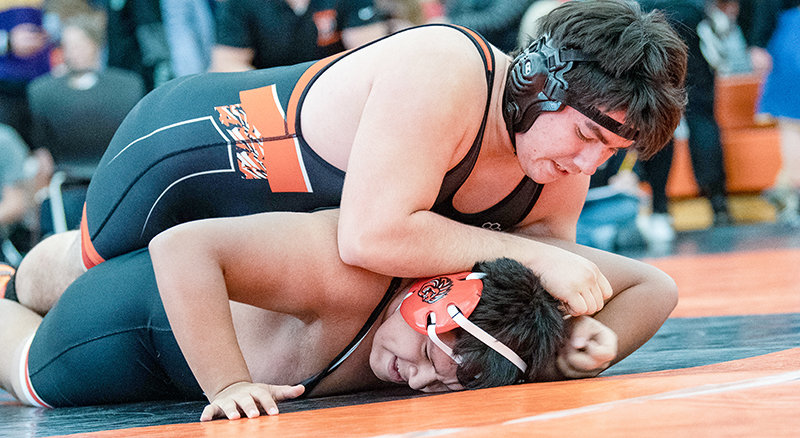 PHS sophomore Adam Flores pins down Bryan Escobar during his opening match at the Powell Invitational on Friday, Dec. 10. Flores finished second at the meet, which featured stiff competition for the young Panther team.
Tribune photo by Carla Wensky 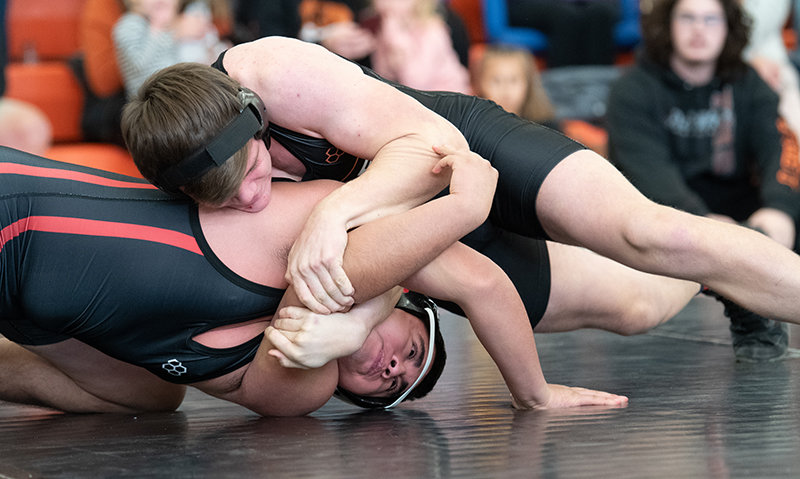 PHS sophomore Jimmy Dees goes for the pin against Riverside’s Bryan Galvez during his opening match of the Powell Invitational. Dees lost just one match all weekend, taking third in the 195-pound division.
Tribune photo by Carla Wensky
Previous Next
Posted Tuesday, December 14, 2021 8:20 am
By Seth Romsa

Opening weekend of high school wrestling season brought 23 teams and 430 competitors to Powell from Wyoming and Montana for the weekend.

With 22 rostered freshmen and a lack of varsity experience, Panther head coach Nick Fulton faced difficult decisions over where to place his wrestlers with such high levels of competition coming in.

“The quality of the tournament was up from recent years,” Fulton said.

One Powell High School wrestler who made a jump heading into the new year of competition was sophomore Adam Flores. Flores made the adjustment from his freshman year jumping from 220 pounds to 285 and making the finals at the Friday-Saturday Powell Invitational.

“He [Adam] had a nice showing and a good starting spot,” Fulton said.

Flores went 5-1 on the weekend, winning each match via pin, before falling in the final to Lander’s Cody Cunningham by pin at the 1:23 mark.

Sophomore Jimmy Dees also made a leap heading into his second year, advancing to the semifinals and losing a close decision 8-6 to Natrona County’s Brendyn Nelson. Dees bounced back in the third place match and took the bronze with a 6-2 decision. Dees went 4-1 at 195 pounds on the weekend.

Junior Stetson Davis battled his way through the weekend at 182 pounds, going 5-2 and taking fourth place.

A first round loss for junior Lannon Brazelton was overcome as he battled his way back to the consolation final and placed sixth overall at 170.

“The guys they lost to were state champions,” Fulton said. “Lannon’s [Brazelton] losses were all to state champions. They all showed a lot of maturity.”

The lone placer for Powell at last year’s state tournament was junior Vinny Timmons, who is wrestling up to 132 pounds after competing at 126 last year.

Timmons had a difficult weekend, going 2-4 and losing both tournament matches. Fulton said Timmons tweaked his knee during a match but was unsure of the extent of the injury on Sunday.

The Panthers were light at the lower weight divisions at the varsity level, with Fulton opting to place the younger wrestlers in junior varsity in order to see their levels.

PHS had a standout at the JV level in freshman Cody Seifert, who won the 145 pounds division. Seifert went 6-0 on the weekend — winning five matches via pin and the final in a 7-2 decision — to be named outstanding wrestler for the tournament.

Due to Seifert’s youth, Fulton admitted he was unsure of where to place him, but the coach knows things are ever changing at this early point in the season — and the varsity roster has not yet been set.

The Panthers will hit the road this weekend and in a unique fashion. Fulton will be splitting the team up and sending two rosters to different varsity tournaments. Team one will be going to Gillette to take part in the Thunder Basin Invitational, and the second team will go to Worland to take part in the Battle in the Big Horns.

Fulton said that the Thunder Basin Invitational will feature top teams from Wyoming, South Dakota and Montana and he expects top competition at the event.