Powell High School’s track and field teams excelled this year, and two coaches were recognized for their commitment to the program. The Wyoming Coaches Association named PHS head coach Scott … 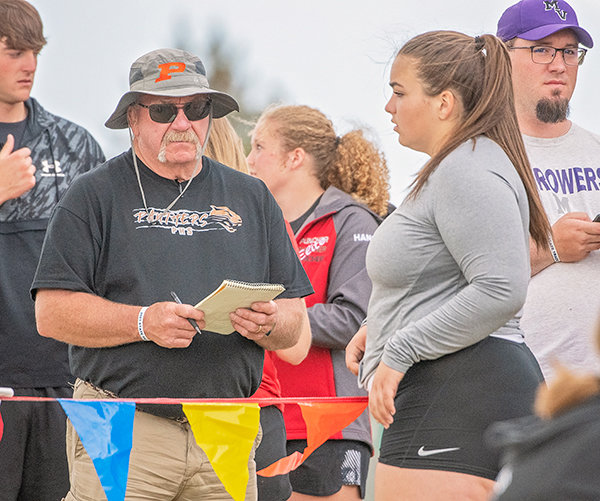 Nevin Jacobs meets with Reagan Thompson before a throw at the 3A State Track and Field Meet. Jacobs won outdoor track and field assistant coach of the year for his efforts in 2021.
Tribune photo by Carla Wensky 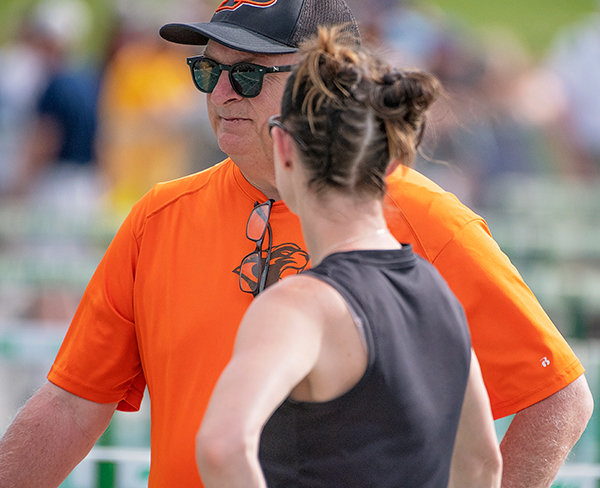 Scott Smith speaks with a coach at the 3A State Track and Field Meet in Casper. Smith, who has coached in Powell for almost three decades, said it is ‘an honor to be able to represent our entire coaching staff and team’s efforts this year.’
Tribune photo by Carla Wensky
Previous Next
Posted Tuesday, June 22, 2021 8:10 am
By Carson Field

Under Smith’s leadership, the girls’ track and field team cruised to the Class 3A state title, posting 105 team points at the state meet. Powell posted a handful of first-place and medal finishes at that meet, as well as several other team first-places throughout the year.

Smith has coached at PHS for nearly three decades and is proud to represent the program he has built.

“It is an honor to be able to represent our entire coaching staff and team’s efforts this year!” Smith said.

Added PHS activities director Scott McKenzie, “Coach Smith’s program has close to 100 participants each year and he does an amazing job of utilizing his staff to get the most out of each athlete. He is very deserving of this award.”

Jacobs is also a longtime PHS coach, specializing in throwing. Between the girls’ and boys’ teams, three throwers finished in the top five at state — Reagan Thompson, Cassidy Miner and Toran Graham.

“Coach Jacobs is one of the best throwing coaches in the state,” McKenzie said. “His loyalty and dedication to his athletes is second-to-none. I am ecstatic for Coach Jacobs to be recognized for his efforts over the many years that he has coached at Powell.”