A long road trip south did not slow down the Panther boys’ soccer team, as they rolled past Mountain View 7-0 on Friday and 13-0 over Lyman on Saturday.

In their first match of the weekend, … 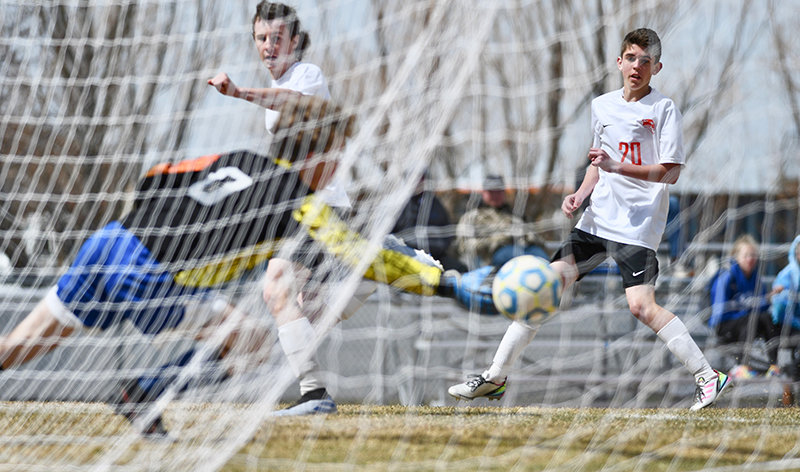 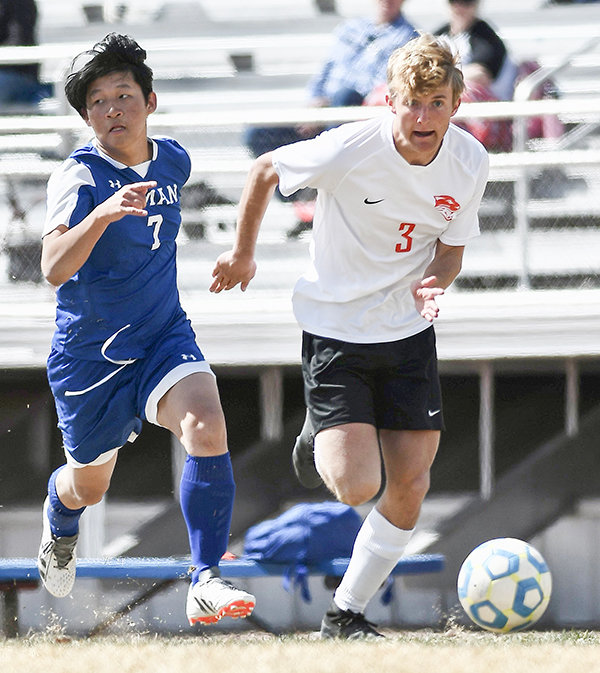 A pair of dominant wins on Friday and Saturday were led by Panther senior Keaton Rowton (right) who finished with five goals against Lyman. The Panthers moved to 4-0 in 3A West conference play.
Photo courtesy Don Cogger, Uinta County Herald
Previous Next
Posted Tuesday, April 5, 2022 8:15 am
By Seth Romsa

A long road trip south did not slow down the Panther boys’ soccer team, as they rolled past Mountain View 7-0 on Friday and 13-0 over Lyman on Saturday.

In their first match of the weekend, the Panthers (6-1 overall, 4-0 3A West) matched up with Mountain View (0-4 overall, 0-4 3A West) as Powell tried to get back to playing their style of soccer.

A scheduling change forced the Panthers to play a lot sooner than anticipated, as they moved the kickoff up to 3 p.m. That did not disrupt the Panthers.

They controlled the match from the opening kick and executed their game plan, although they lacked some composure in front of the goal.

“Reece Bauer was man of the match with one goal and one assist,” Panthers head coach David Gilliatt said. “It was actually his first goal in high school. A good accomplishment as an outside back.”

Heading into Saturday’s game, the Panthers knew  they needed to be more clinical in front of goal as they made the short drive over to Lyman (1-6 overall, 0-3 3A West) to take on the Eagles.

That task was met early on. The Panthers scored in the first two minutes and finished the first half by putting 10 past Lyman.

With the margin high, Gilliatt brought his bench in to get valuable experience for the future, as the Panthers finished the match 13-0.

Chance Franks led the way with three goals and five assists, Rowton had five goals (pushing his total to 11 on the season), Sweeney had three goals and assists, junior Colton Brewer had a goal and assist and junior Morgan Hobbs contributed a goal.

“I know they graduated some very good seniors but they still have good players and are always well coached,” Gilliatt said of the Tigers. “I haven’t seen them play this year but I have kept track of the scores of their games so I have an idea. We’ll do our best to be ready to host them this Friday.”

Powell expects to welcome back senior midfielder Garrett Morris, who missed the previous three games with an injured foot.

Gilliatt said the injury was not severe but the team wanted to give Morris the chance to heal up.

The Panthers will also host Worland next week — at 5 p.m. on Tuesday, April 12 — before heading into the Easter break.