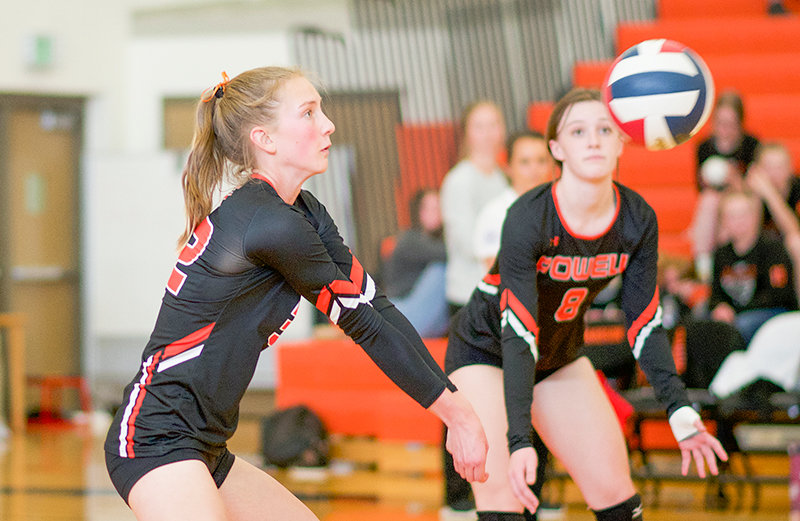 Powell High School freshman Kenna Jacobsen (left) receives the ball alongside junior teammate Waycee Harvey and passes it to the front line during a JV match on Oct. 22 against Lovell. The Panthers finished the season with two tournament wins and a 20-10 record.
Tribune photo by Seth Romsa
Posted Tuesday, November 23, 2021 8:15 am
By Seth Romsa

Panther JV coach Chelsi Graham said the season began a little shorthanded, with a roster of only eight players.

Despite having a small team to throw into the rotation the Panthers went on an undefeated run at a Riverton tournament and won the gold bracket at a Rawlins tourney. Following the early season tournaments, the team was able to bring up four freshmen to help round out the rotation.

Graham said her team really focused on communicating on and off the court.

“When my girls grew quiet out on the court during the game, our intensity went down and we did not play to our full potential,” she said. “When we showed emotion, talked about everything going on during the rallies, and called out and communicated with each other we played awesome.”

The most memorable moments for the Panthers included their matchups against Cody — intense matches that were close throughout.

Graham said the first contest with Cody was a close encounter. Heading into the second match, she felt the Panthers could have won in Cody but made some errors late on that allowed the Fillies to pull out the victory.

Graham had many standouts throughout the season, which included setters junior Anna Bartholomew and sophomore Stevee Walsh who “did an excellent job running the JV team.”

The coach said Bartholomew took over as a blocker and hitter in the rotation, along with Walsh, who always gave it her all on the court and did a good job of bettering the ball each contact.

Sophomore Maci Borders took over as the team’s right side hitter/blocker, featuring a hard swing for the other team to read. Borders improved her blocking throughout the year and was a fun and positive impact on the team, the coach said.

Junior Mikayla Graham and sophomore Lauryn Bennett served as the team’s strong side. Graham came in with her consistent hitting and passing, along with her ability as a left handed hitter made her difficult to defend for other teams.

Bennett came in as a server and digger for the team, but improved her swing throughout the season to help her get the ball down more consistently.

Graham said Trotter has an incredible ability as a blocker, but the coach was impressed with Trotter’s ability to improve her hitting and become more consistent throughout the season.

Harvey came in with an incredible vertical which allowed her to move everywhere along the net as a blocker, the coach said, and her confidence as a hitter also grew throughout the season.

Sophomore Kenzie Fields served as a libero/defensive specialist, stepping into the role for the first time this season. She brought a serve that was difficult for the other team to pass and receive, coach Graham said.

The four freshmen who earned their way onto the junior varsity team were Kenna Jacobsen as an outside/setter, Catelynn Floy as an outside/middle, Saige Kidd as a middle and Alexa Richardson as a libero.

Another important part of the team included manager Kenna Czirr, who helped the team when they needed it most and supported them throughout the season.

“One thing that I hope my team took with them this season is the memory of how much they love the game of volleyball,” coach Graham said. “There may be hard, frustrating times during the season, but learning to work through them and coming out on the other side a better person/athlete is what we coaches hope for each player.”