While the Powell High School girls’ soccer team didn’t end the season on top, its last game was a step in the right direction.

The Panthers fell 5-1 on the road to Worland on … 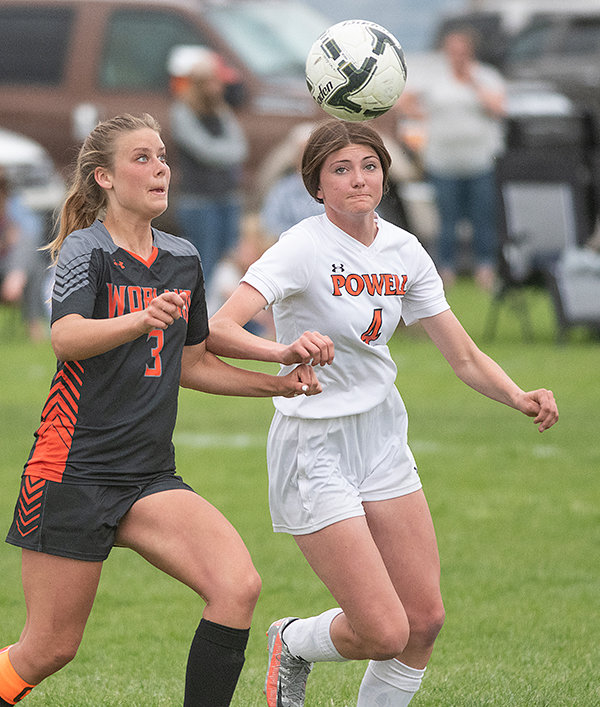 Panther Taycee Walker goes for a header against Warrior Kylie Warren on Friday in Worland. Powell’s second meeting against Worland was a significant improvement from its first meeting, when PHS lost 8-0.
Tribune photo by Carson Field 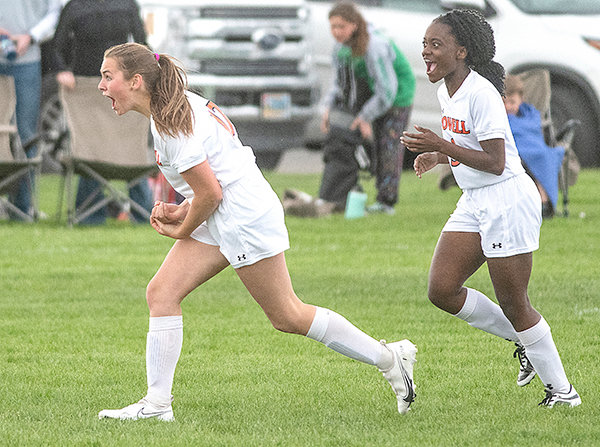 Jaedyn Hampton (left) celebrates with Kalaiah Stenlund after scoring a goal late in Friday’s match against Worland. The score sparked energy from the Panthers and previewed what the program can achieve in the near future.
Tribune photo by Carson Field
Previous Next
Posted Tuesday, May 18, 2021 8:00 am
By Carson Field

While the Powell High School girls’ soccer team didn’t end the season on top, its last game was a step in the right direction.

The Panthers fell 5-1 on the road to Worland on Friday, concluding their 2021 season. While the Warriors won handily last week, the four-goal deficit was much improved from the 8-0 scoreline in the first meeting.

After WHS came out quick, leading 4-0 at halftime, PHS rose to the occasion. The team allowed just one goal in the second half and tied 1-1 in the final 40 minutes.

With 11 minutes remaining in the match, Jaedyn Hampton struck a shot from outside the box, sailing into the top-left corner of the net, just past the keeper’s outstretched arms. It was Powell’s fifth goal of the season and fourth in the last two games.

“It was a solid strike put on target that resulted in a much-deserved goal for her,” PHS head coach Kaitlin Loeffen said. “She appeared shocked that it went in, however, I wasn’t as I knew if she put everything together, she would find the back of the net.”

“It was great!” Loeffen said. “We knew Worland was a good team and I emphasized to our ladies that they needed to play their best the entire game regardless of the score, to regret nothing, and leave it all on the field.

“It demonstrates they hadn’t given up,” the coach said.

Loeffen admitted that a weak first half was something the team struggled with all season, but the Panthers’ success late in the match provided a preview of what the program can achieve in the near future.

“I know individually each girl has improved over the course of the season, but collectively as a team this match provided a good comparison of early/late season,” she said. “There were a lot of promising tactics that I look forward to developing this off season.”

For a handful of players, Friday was their last game on the pitch. Mattie Larsen, Sidney Karst, Madi Fields, Paije Johnson and Bailee Moore will graduate later this month.

This group — which provided much-needed leadership during a tumultuous season of injuries and other obstacles — will be missed.

“Their leadership was second to none,” Loeffen said. “They served as role models on and off the field, and for that, I am grateful of the young ladies they are and will continue to be. I wish we could have played last season to allow them more time, but they made the best of their final season.”

While PHS won just once in the 2021 season — finishing with a 1-12-1 record — the team grew steadily over the course of the year. As the program continues to develop, Loeffen hopes her players improve on first touch and become more proactive on both sides of the ball.

The coach has big plans for her team, and in the months leading up to the 2022 season, she hopes to build on its recent improvement.

“I expect this to develop in the offseason as we find time to have open turf, attend camps and play fall/indoor soccer together,” Loeffen said.