The Panthers picked up their first win of the season, defeating Lyman in … 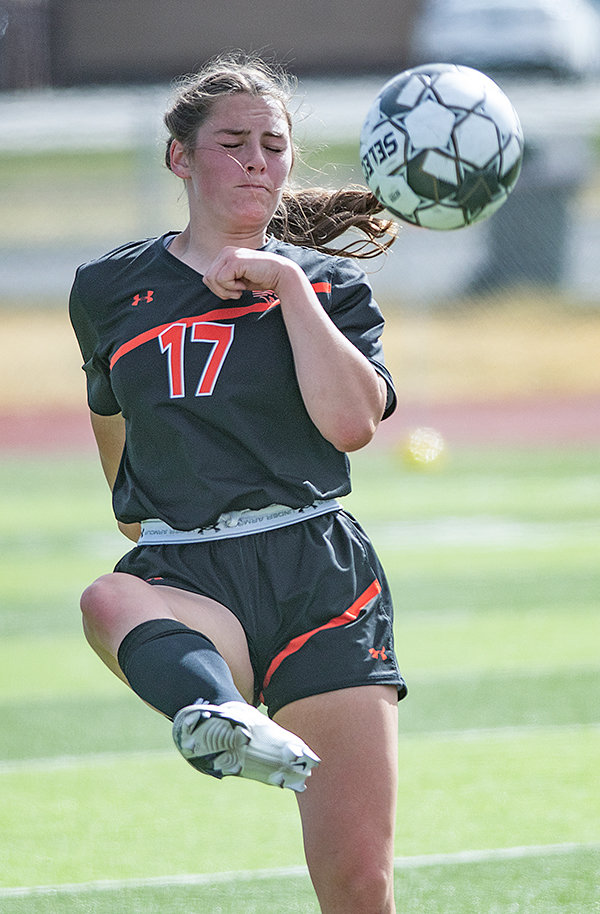 Jaedyn Hampton goes for a ball in a match earlier this season. The Panthers picked up their first win over the weekend, taking down Lyman 3-2 on the road.
Tribune photo by Carson Field 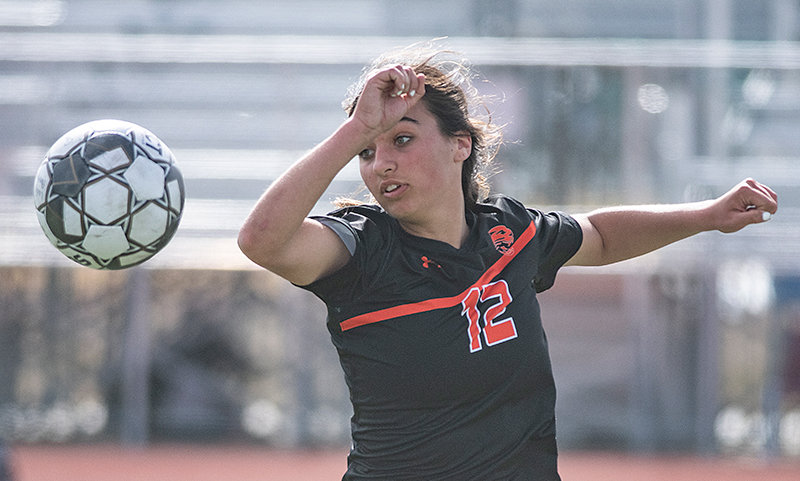 Kenzie Fields tracks down a ball earlier in the season in a match against Cody. The Panthers wrap up the regular season Friday against Worland.
Tribune photo by Carson Field
Previous Next
Posted Tuesday, May 11, 2021 8:05 am
By Carson Field

The Panthers picked up their first win of the season, defeating Lyman in a 3-2 road contest. One day prior, they dropped a 4-0 match against Mountain View.

Against Lyman, PHS had something to play for. The Panthers controlled possession for roughly 90% of the match against the Eagles in their first meeting — a 1-0 home loss on April 17.

“In my opinion we were the better team,” said PHS head coach Kaitlin Loeffen, “and they got a second opportunity to prove that on Saturday,”

Powell took an early lead, holding a 2-0 advantage at halftime. Sidney Karst and Gracie Trotter netted goals early to put the team in front for the first time of the season. Karst scored on a free kick outside the box, while Trotter finished after tracking down a long ball.

With a newfound advantage, Loeffen stressed the need to avoid complacency.

“I told the girls there were still 40 minutes left and the winner had not been determined yet; they needed to keep fighting,” she said.

Lyman responded well after the break, knotting the match at 2-2. The Eagles scored on what Loeffen described as a “questionable” penalty call in the box, allowing LHS to score on a penalty kick, and the Eagles scored the equalizer a few minutes later.

But the Panthers didn’t allow themselves to become discouraged.

“It was then when I saw how badly our girls wanted that win,” Loeffen said.

With a few minutes remaining, Sammi Rivas took a shot from 30 yards deep that sailed past the Lyman keeper’s gloves, giving PHS the lead once again. After this go-ahead goal, there was no going back, and Powell escaped with a 3-2 win.

In what has been a tumultuous season, it was a signature win for the program.

“This win was timely, with the end of the season fast approaching; they deserved to see their hard work pay off,” Loeffen said. “Scoring wise, I feel this will give them more confidence going forward.”

Even in the Panthers’ four-goal loss the day before, they competed. PHS held Mountain View to just one score in the first half before the Buffalos ultimately pulled away in the second half, adding three more.

“As the second half progressed, their speed overwhelmed us, and they capitalized on their opportunities,” Loeffen said. “I was pleased with the effort but would have liked a cleaner second half.”

PHS has just one more game remaining in the regular season: a 4 p.m. Friday contest on the road against Worland. In the first meeting, Powell lost to the Warriors 8-0.

Though WHS is among the state’s best teams, Loeffen is confident her squad is capable of competing against the Warriors.

“I hope to see the ladies finish the season hard. I want us to put together everything we have learned these past few months,” Loeffen said. “I want to see a competitive match and I know they are up for the task.”