Two important early season matchups greeted the Panther girls’ soccer team on the road over the weekend, as they lost to Mountain View 4-0 on Friday and 2-1 to Lyman on Saturday. 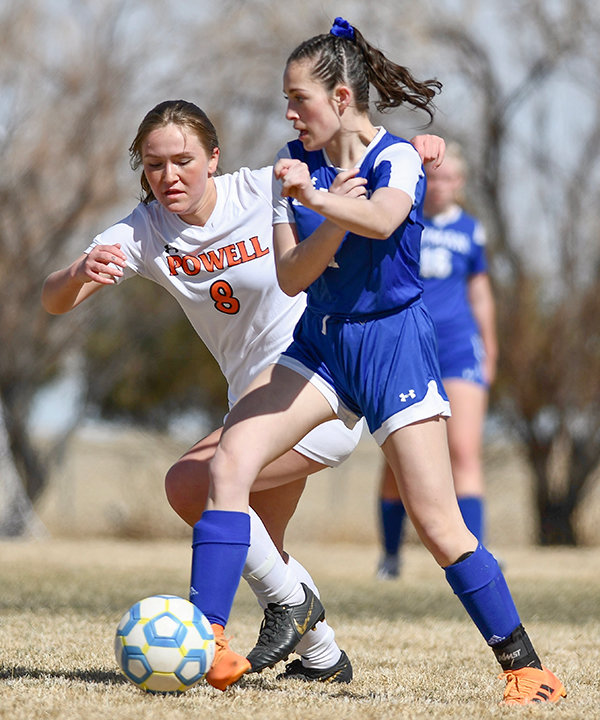 PHS senior fullback Abby Bradley attempts to steal the ball back from a Lyman attack as part of a difficult weekend on the road. The Eagles scored a last minute goal to win 2-1.
Photo courtesy Don Cogger, Uinta County Herald
Posted Tuesday, April 5, 2022 8:00 am
By Seth Romsa

Two important early season matchups greeted the Panther girls’ soccer team on the road over the weekend, as they lost to Mountain View 4-0 on Friday and 2-1 to Lyman on Saturday.

The first game of the weekend had the Powell High School team (2-5 overall, 1-3 3A West) face off against Mountain View (2-2 overall, 2-2 3A West) in a key matchup that will help determine who goes to state in just over a month.

Throughout the game, the Panthers made the decision to stick with the Buffalos’ top athlete.

“We essentially man-marked their best player and [freshman] Emily Orr did an outstanding job doing so,” Panther head coach Kaitlin Loeffen said. “Unfortunately, Mountain View had other girls step up and with their speed they capitalized in the middle.”

Mountain View put three past the Panthers in the first half, and another in the second half as Powell dropped the game 4-0.

On Saturday, PHS looked to bounce back against Lyman (2-4 overall, 1-3 3A West) and salvage one win from the road trip.

Both teams had their opportunities throughout the first half, as both keepers were tested and called to action to keep the match tied at 0-0.

The Panthers’ back line expected to be tested, as senior center back Sarah Dunkerley was out of the lineup with a foot injury and senior fullback Abby Bradley was out with an illness.

The back line was strong until the final minutes of the half, when Lyman found a goal on a cross turned shot that sailed over Panther keeper Taylor Sanfilipo. The Eagles took a 1-0 lead into halftime.

Powell found a response early in the second half, as junior Jaedyn Hampton scored on an assist from Orr.

The teams then went back and forth, as both pressed in an attempt to find a winning goal.

The Panthers had a chance on a corner kick late, as a scramble in the box allowed Lyman to clear.

A quick counter by the Eagles pressed past the Panther defense and Lyman found the net with two minutes left to take the win, 2-1.

“I thought our girls did a good job marking well, but allowed the first goal when getting beat, the second off a break away,” Loeffen said. “We will work on transitioning and we have to respect that other teams are likely quicker than us. Knowing this, we have to play smarter and rely on each other to shut down a team’s counter.”

The Panthers will return home on Friday for the first time since the season’s opening weekend, playing No. 2 ranked Lander (2-1 overall, 2-0 3A West) at 3 p.m.

“Lander is a solid team, well coached, and have players that could play at the next level,” Loeffen said. “My hope for the girls is that we have a good week of practice and prepare for a battle.”

The Panthers will follow that up with a home game against Worland on April 12 in another key 3A West matchup, before heading into the Easter weekend.