After a strong start to the season, the Panther girls’ soccer team has run into a difficult stretch. The Powell High School team lost its fifth straight contest on Friday, falling to No. 2 … 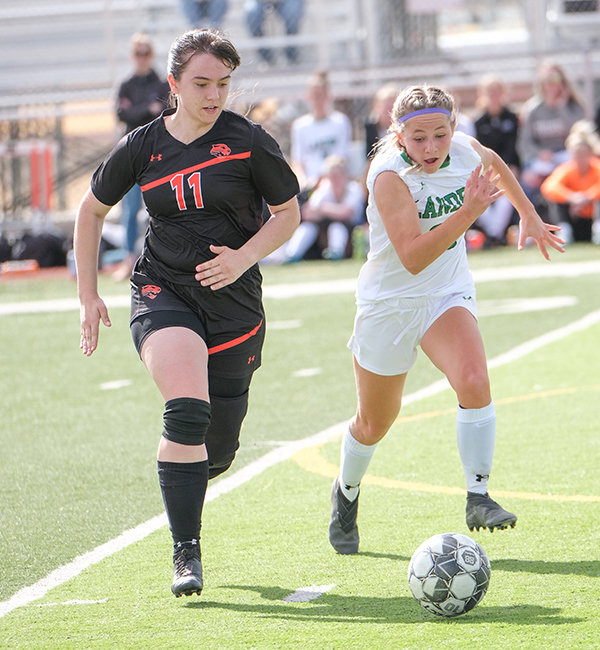 After a strong start to the season, the Panther girls’ soccer team has run into a difficult stretch. The Powell High School team lost its fifth straight contest on Friday, falling to No. 2 ranked Lander at home 7-0.

Lander (4-1 overall, 3-0 3A West) came out firing, as the defending state champions tried to put the contest out of reach early against Powell (2-6 overall, 1-4 3A West).

The Tigers scored two goals in the first seven minutes, as they put constant pressure on the Panther defense from the first kick.

“Our defense has played solid throughout the season, regardless of the scores. They are often paired with girls that may have the upper edge with speed, but our girls continue to grind it out and meet their match game in and game out,” PHS head coach Kaitlin Loeffen said. “I thought they adjusted quickly after being beat up the middle twice early in the first. I am always proud of their effort.”

After those early goals the Panthers settled in and were able to hold off the Lander attack for 30 minutes before an own goal with two minutes remaining in the half made it 3-0.

The Tigers launched another quick blitz early in the second half, scoring two goals in the first 2:30. Lander took advantage of a quick free kick from 20 yards out and quickly added another goal to go up 5-0.

Lander got their final two goals with 26 and 23 minutes remaining. Although they didn’t find the net, Powell was able to create some attacking opportunities over the final 20 minutes of the game.

In the second half, Loeffen moved her team around, trying to find a combination that allowed her team to push forward more often.

“My goal was to get younger girls a taste of different positions I may need them to play in the near future,” Loeffen said. “I also thought it would be good for them to see the field from that position to better help support their teammates when they return to their normal positions.”

Powell was scheduled to play Worland in a key 3A West matchup today (Tuesday), but the game was postponed until Monday, April 25, at 4 p.m. due to weather.

The delay means that the Panthers do not have another scheduled game until heading to Lander on Friday, April 22, for the rematch. The Panthers will head to Pinedale on Saturday, April 23, before returning home for their Monday contest against Worland.

“With long breaks, it is always nice to give the body a rest but continue to develop skills and maintain endurance,” Loeffen said. “We will focus on stretching and giving injuries that have been of nuisance some time to heal before we head into the second half of the season.”

She said the team will continue to work on areas to make them more competitive, as they continue to grow in the middle of the season.