The Panther cross country team was once again faced with hot conditions as both the boys and girls teams competed in the Michelle Ludwig Invite in Sheridan on Saturday. The Powell High School girls … 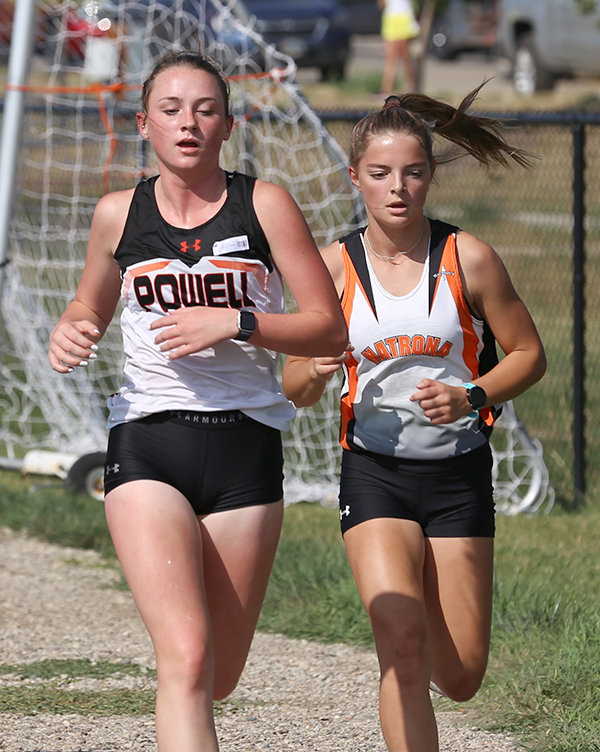 Kinley Cooley continued her impressive freshman campaign as she ran a personal 21:27.39 to place 15th overall in the Michelle Ludwig Invite in Sheridan on Saturday, Sept. 18.
Photo courtesy Scott Schiller 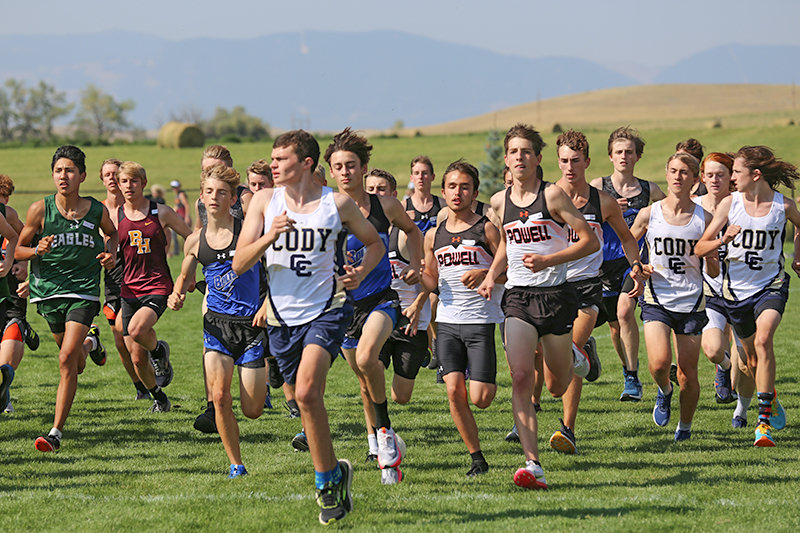 Riley Schiller, Daniel Merritt and Ben Whitlock sprint off the starting line as they looked to gain an advantage on the competition at the start of the race.
Photo courtesy Scott Schiller
Previous Next
Posted Tuesday, September 21, 2021 8:05 am
By Seth Romsa

The Panther cross country team was once again faced with hot conditions as both the boys and girls teams competed in the Michelle Ludwig Invite in Sheridan on Saturday. The Powell High School girls took eighth place and the boys ninth at the invitational.

Freshman Kinley Cooley once again was not bothered by the 90-degree heat as she ran a personal best time of 21:27.39. Cooley was the top runner for the Panthers, finishing in 15th place overall.

Brynn Hillman has been consistent all season for the Panthers, as she ran a 22:48.36 and placed 31st overall.

“She [Hillman] has been consistently running in the 22s and I look for her to break into the 21s in the next couple of meets,” PHS head coach Ashley Hildebrand said.

Coming in third place for the team and 39th overall, Kabrie Cannon finished with an overall time of 23:39.58. Hildebrand said that Cannon was able to post that time despite cramping throughout the race, and the coach expects her to bounce back next week.

Placing fourth for the team was Gabby Thomas, who ran a season best time of 24:36.49 for 50th place.

Gracie Wolff ran a personal best time of 25:10.87 and Hildebrand said she expects Wolff to continue to improve and bring her time down into the 24s very soon.

The biggest surprise for Hildebrand was freshman Salem Brown, who in her second race shaved two minutes off  her time last week by running a 25:35.69.

“She [Brown] is only a ninth-grader and is still getting used to the 5K distance, so I am excited to see how her times come down in the next few weeks,” Hildebrand said.

Liz Peterson opted to run in the junior varsity race this week due to soreness and Jordan Black did not race due to illness.

Riley Schiller continued to be consistent for the Panthers as he posted a time of 19:07.04 and placed 39th overall for the meet.

“We were really pleased to see him place in the top half of a talented field of runners,” Hildebrand said.

Senior Ben Whitlock shaved nearly a minute off of his time a week earlier to finish in 64th place with a time of 20:42.50.

Stuart Shoopman was 81st in the race with a time of 22:23.68, Caiden Gehrts raced but was left out of the standings and did not have a recorded time.

Hildebrand said Sheridan allowed for 10 varsity runners to be entered as opposed to the typical seven.

Hildebrand said the team was missing several boys due to illness or quarantine, and that she hopes they will be back before Thursday’s race in Cody.