A unique opportunity presented itself for the Panther cross country teams on Monday, as the Powell High School girls placed the first seven runners, and the boys finished runners up at a smaller meet … 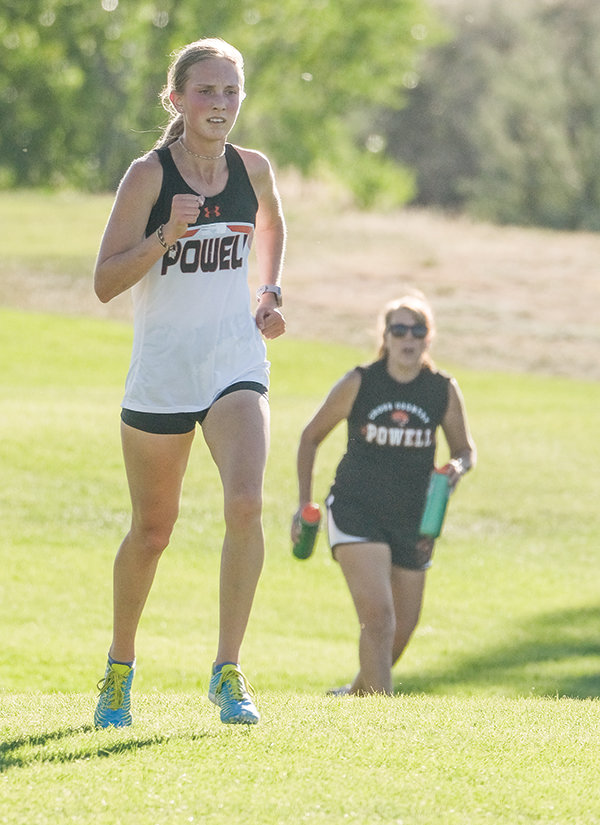 Kenna Jacobsen ups the pace toward the finish line while coach Ashley Hildebrand helps push her to a strong time.
Tribune photo by Seth Romsa 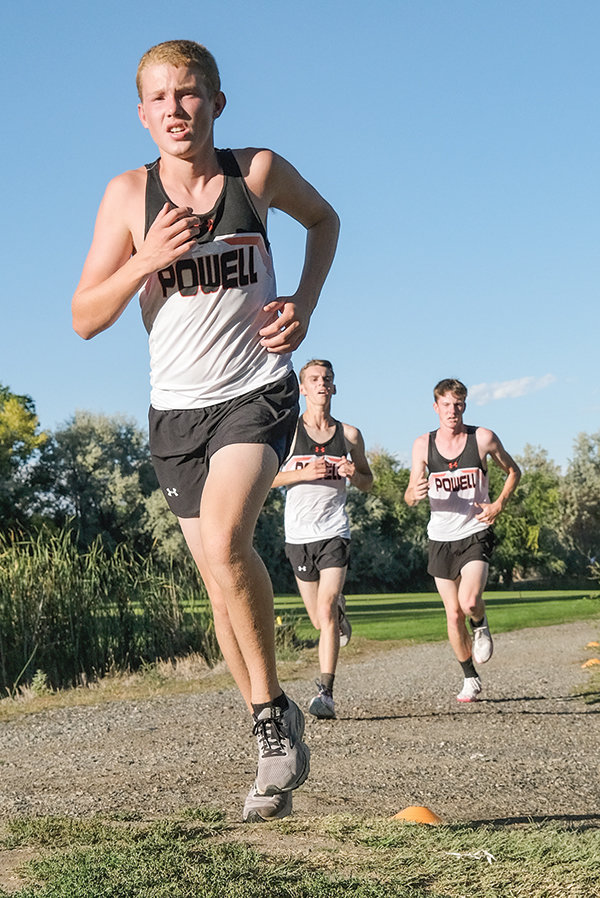 Liam Taylor leads the pace just ahead of Breckin Streeter and Jace Hyde during the Rocky Mountain Invitational on Monday.
Tribune photo by Seth Romsa
Previous Next
Posted Thursday, September 22, 2022 8:20 am
By Seth Romsa

A unique opportunity presented itself for the Panther cross country teams on Monday, as the Powell High School girls placed the first seven runners, and the boys finished runners up at a smaller meet at Foster Gulch Golf Course in Lovell.

PHS was not supposed to be running a majority of its top runners on Monday, but a rain delay for the Lander meet last Thursday and not able to attend the meet on Friday allowed the Panthers to showcase their talents.

“Monday’s meet at Rocky Mountain was not originally on the schedule for the bulk of our team,” coach Ashley Hildebrand said. “Because we were not able to compete in the Lander Invitational due to weather, our entire team was able to race.”

On the girls’ side, Kinley Cooley again led the way for the Panthers, finishing first overall (20:52).

Following a strong freshman campaign last season, Cooley has taken on a stronger leadership role this season as the definite number one runner for the Panthers.

“I try to keep everyone with a positive attitude,” Cooley said. “We are really tight knit this year, there is no drama or anything like that. We are pretty much a big family.”

She said that the closeness has allowed the team to help push each other, knowing that each day they compete against each other they make each other better.

Cooley is hopeful that the Panthers can make a challenge against defending state champion Cody at the state meet this year, having barely lost to the Fillies at a meet earlier this year.

“Our girls got a perfect score, I think that was a first,” Hildebrand said.

The meet was scored to four places, giving the Panthers an overall score of 10 points.

On the boys’ side, Daniel Merritt led the way on a hot day with a 18:22 to place third overall.

“Jace, a newcomer to cross country this year, and Juan, an up and coming sophomore, both broke into the 19’s,” Hildebrand said. “We look for both of them to continue to improve and help the boys’ team scores continue to improve over the course of the season.”

Overall the Panthers finished second with a score of 21 behind Rocky Mountain/Burlington which finished with 18.

“Rocky’s meet gave us the perfect opportunity to race and get in our hard workout for the week before we head to Worland this Thursday,” Hildebrand said.

The race in Worland is scheduled to start Thursday (today) at 4 p.m.